Israel: ‘We just have to play a full 60 minutes’ 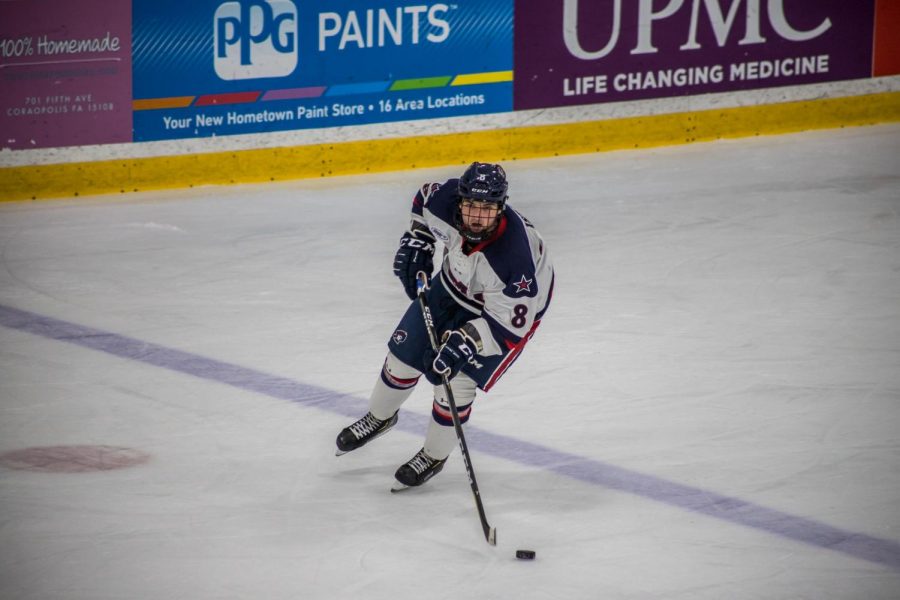 RMU is entering this two-game weekend series a week after being swept at home in a pair of games by the Bentley University Falcons (7-11-2, 6-7-1 AHA). In these two games, the Colonials were outscored by the Falcons 10-3.

After practice Wednesday morning, senior defenseman Eric Israel and assistant head coach Kody Van Rentergem were both locked in and focused on what needs to happen in order for Robert Morris to secure their first victory of the new calendar year.

In order to do this Israel said, “We just have to play a full 60 minutes.” He continued to say, “We have spurts of dominance during those games, but then we lose focus.” The team’s leading scorer among defensemen went on to say that “playing together and being a single unit” in addition to playing a full 60 minutes will not just help the team grab their first win of 2019, but it will also give them a spark heading into the playoffs.

Van Rentergem then addressed the team’s defensive issues over the course of the team’s current losing streak. He said, “I think the first thing that we gotta take care of is compete level.” Van Rentergem then stated “We just haven’t competed enough, or hard enough I should say.” He continued to mention that this is the first thing, because, “without that, you’re not gonna have any success.”

The assistant head coach then went on to his second point which addressed individual responsibility in the defensive zone. “It’s details in our own end, and if each guy takes care of their own details, I think we should be successful,” said Van Rentergem.

Israel also talked about winning individual battles on the defensive end. “It comes down to owning that that one on one battle it’s your job to win that battle.” He then went on to talk about how that they have to have trust in each other to do their job in the defensive end. Israel ended his statement with “Ultimately, we just have to bear down and do the little things right, get pucks out, get pucks deep at the two blue lines, and we haven’t been doing that and that’s really what’s been costing us in the last couple of games there.”

As for what Canisus brings to the table, Van Rentergem talked about the Golden Griffins speed. “I think they play with a lot of pace, which is difficult for any team to really deal with, when a team is coming at you full speed the whole game,” said Van Rentergem. He continued to say that the Colonials will need to find way to slow down the Golden Griffins.

Men’s hockey returns to the ice on Friday as they travel to Buffalo to take on the Canisius Golden Griffins in a two-game set.