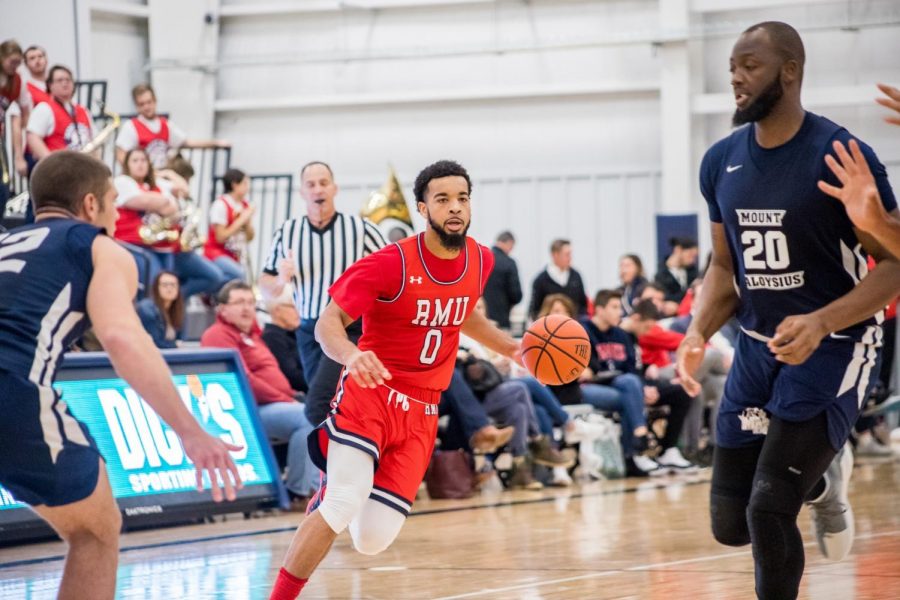 MOON TOWNSHIP — The Robert Morris Colonials (1-2) defeated the Mount Aloysius Mounties (0-1) Wednesday night 104-57 at the Student Recreation Center at the North Athletic Complex. The Colonials were hungry for a win after starting off the season with two losses.

Josh Williams was the hungriest. The senior transfer had to sit out the entire 2017-18 season due to NCAA transfer rules. In his first game, he led all scorers with 49 points and tied the NCAA record with 15 made three-pointers on 25 attempts.

The Williams brothers are a duo that will be talked about all season long. After playing his freshman and sophomore seasons at Akron, Josh transferred to Robert Morris and reunited with his brother, sophomore Jon.

“It’s fantastic. I couldn’t ask for a better place to do it, especially with my brother here… It is really special to have the support that I have here.”

This game marks the first time the Colonials played on campus in over a year after they played games last season at both the PPG Paints Arena and A.J. Palumbo Center.

“It (Student Recreation Center) can be a really neat atmosphere and can be a great home court advantage for us…I know our guys are happy to be playing back on campus in front of the students,” said Head Coach Andy Toole.

The Colonials also never trailed in the game and forced the Mounties to commit 25 turnovers.

The Colonials were off to a hot start in the game as two new Colonial faces found their way into the scoring column. Matty McConnell found an open Yannis Mendy for an easy dunk and Josh Williams hit an open three-point shot. Brothers Jon and Josh Williams, as well as McConnell, converted three-point baskets and the Colonials found themselves up 14-3 at the first media timeout with 15:36 remaining in the first half.

After scoring only two points in four minutes between the media timeouts, the Colonials still led the Mounties 16-6. Through the first eight minutes of the game, RMU made four three-point baskets and forced seven turnovers.

With 7:03 remaining in the first half, an injury timeout was called when Mount Aloysius’ Trent McErlane went down with an injury. Out of the break, junior transfer Sayveon McEwen found the scoring column with a corner three and Josh Williams hit another three-point basket to put the Colonials up 37-12 with 5:10 left in the first half.

Coming out of the last media timeout in the first half, the score was 39-15 in favor of Robert Morris. Charles Bain and McConnell each made two free-throws while Williams hit yet another three-point shot to put the Colonials up 50-22 with 32 seconds left.

The Colonials took a big lead into halftime with the score 51-24. They were up early and did not slow down. Williams led all scorers with 23 points. He went 7-of-12 behind the three-point line. Seven of the nine Colonials that saw minutes in the first half scored at least three points. The Colonials also forced twelve turnovers while only committing two themselves.

Both teams came out of the half sluggish and points were not scored until Jon Williams hit a corner three-point shot with 17:14 left in the second half to put the Colonials up 54-24. Stover converted both free throws at the other end to cut the deficit to 28 points.

McConnell and Stover traded three-pointers to make the score 57-29 with 16:15 left. Approximately six minutes later, at the 10:47 mark in the second half, Williams had twelve three-point baskets and a game-high 38 points.

Josh Williams hits a corner three to put the Colonials up 60-31 at the media timeout with 14:55 remaining in the second half.

With a few minutes left in the game, Williams was taken out of the game with the score as lopsided as it was. But, fans were chanting, “We want Josh,” and Toole, nonetheless, gave the fans what they wanted. With .7 seconds left, Josh Williams sank his fifteenth three-point basket of the night, tying an NCAA record held by Marshall’s Keith Veney.

In the game, Mount Aloysius was led by Julian Stover with 26 points. Carlos Palacios also had 12 points and 6 rebounds for the Mounties.

As for Robert Morris, McConnell finished the game with 12 points and 7 assists. Six players on the Colonials had at least 3 rebounds in the game as well.

“I think guys are so focused on winning now that we realized that we can compete with pretty much everybody,” said Josh Williams on his team’s performance.

The Colonials will host the Mississippi Valley State Delta Devils (0-3) Saturday night at the Student Recreation Center at the North Athletic Complex. The Delta Devils enter the game following a crushing 94-59 defeat at the hands of the Utah State Aggies.