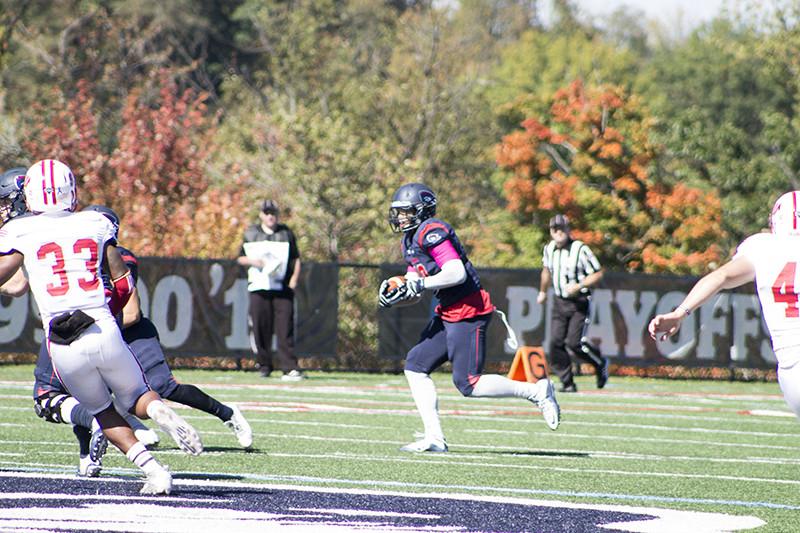 After months of play, another season of college football is about to be in the books, and this one has seen some new developments for the Robert Morris program. The Colonials (3-7, 1-4) showcased multiple aspects of their team throughout the season, including a revamped passing game, a multi-headed ground game that mixes power and speed, and a defense that has stifled opposing rushers and quarterbacks at different points in the season. This week will serve as a season finale for the team and a send-off to eight seniors who have done all they could to help the program succeed over the years, and here are some keys for the Colonials to focus on to end their season on a high note over the Bryant Bulldogs (5-5, 3-2).

1. Have the offense lean entirely on the run, pass only where needed

The peaks-and-valleys trend of the Robert Morris passing game continued last game, as they completed just one-sixth of their passes for a total of 46 yards, no touchdowns, and two interceptions. That followed up a game in which they completed 65 percent of their passes for 225 yards and two touchdowns, which followed a game of 52 percent completion and five interceptions.

The passing game can’t be trusted, but the ground game has been consistent throughout the year, and showcased a terrific two-headed monster last week in Cole Blake (120 yards) and Rameses Owens (61 yards), both of whom averaged at or over 4.6 yards per carry last week versus Saint Francis. In their last three NEC games, Bryant has allowed an average of 141 rushing yards, only a slight drop from the 185 passing yards allowed per game in those same contests. All season the Colonial ground game has fueled the offense – they should stick to what has been working.

I have marveled at the defensive metamorphosis of the Colonials over the season before, but it has officially completed itself as of this week. Beginning the season with a feared rush defense and a pass defense with several holes, the Colonials now routinely hold their opponents near-or-below season averages in passing, while allowing rushers to get close, and often exceed, 100 yards. Last week, against a Red Flash team that passes for over 200 yards per game, RMU held SFU to 116 yards of passing, but also allowed Khairi Dickson and Marcus Bagley to break the century mark on the ground (177 and 113, respectively).

Bryant passes for over 250 yards per game — one of the best totals the Colonials have faced all season. But, if the Colonials have continued this trend for this long, there is no sense in trying to alter it. Let Ricardo McCray (the only real Bryant rusher, with 1,180 yards – sixth in the FCS) go, and focus the bulk of the defense on stopping Dalton Easton and the aerial attack.

In the past three weeks, Bryant may have put up some large offensive numbers, but there is one glaring black mark within the offensive stat sheets: over half (7-13) of quarterback Dalton Easton’s interceptions have come in just those three contests. With scoring opportunities limited, and having been shutout in two of their last three games, the Colonials face the entirely possible reality that they will need to force interceptions to get good field position, and score off those turnovers to have a chance at victory. The Colonials have done well at the first part of that scenario – taking advantage of and recording some points off turnovers will be the harder part, but also the difference-maker.

4. Rally around your seniors

The majority of my keys this season have referenced tendencies and averages and XXX.XX yards per or against or for a specific player (or something similar to anything I just listed). At least once a year, another factor comes along that can make more of a difference in a game than anything else: the home finale. Robert Morris is about to lose several players who have led this team through the last few seasons, and those seniors will be coming out and playing the hardest football of their collegiate careers in their final send-off at Joe Walton Stadium.

Max Robertson and Nick Faraci will be leading the charge along the offensive line, and the team would be wise to send its running backs right behind them. Defensively, Forrest Mason, Mike Stojkovic, and Jake Tkach have all lead the unit all year – Mason in sacks (his career total is also fifth all-time in program history), and Tkach and Stojkovic in tackles (first and second on the team, respectively). With the impact those three have had on this program over their years here, they will undoubtedly be flying all over the field. Every Colonial in uniform should rally around those players, and every other senior on the roster, and help send them off with a victory.