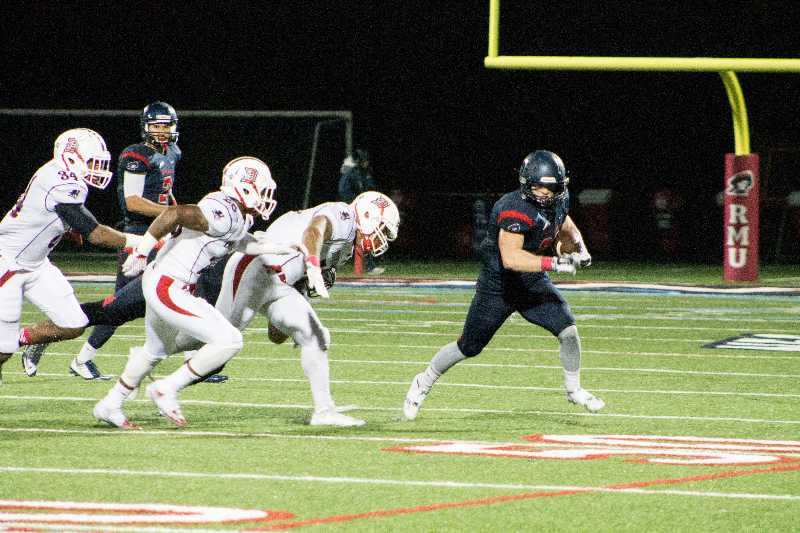 What began as a promising narrative of a rebuilding football program has fallen on some darker days, but for the Robert Morris Colonials, there is light at the end of the tunnel. The Colonials (2-6, 1-3) have three games remaining; the last two are NEC games against above average conference opponents, where RMU will have a chance to earn a statement win to close out their season. This week offers the Colonials their most winnable game remaining: the East Tennessee State Buccaneers (1-7), who are a team that matches up similarly with RMU. For the Colonials to pick up some momentum heading into their first of two potential statement games, here are some key points for them to focus on.

1. Find an offense that can work

This is the only purely offense-related point that will be made today, and trust me, there were some other ones that could have been said. For example, East Tennessee only has four sacks and three interceptions on the season, which could be a key in and of itself in relation to the RMU passing game. The problem? RMU’s passing game, and occasionally the rest of their offense, has been missing all season. It began as a year of promise, and that potential is still present at times each week, but this unit is averaging a paltry 11 points per game (if you discount their one excellent outing of 35 points against Notre Dame College).

Occasional bright moments of the season include the combined 190-yard performance of Cole Blake and Rameses Owens on the ground vs Notre Dame (OH) and Kyle Buss’ 160 yards of receiving this past week. Mathew Barr, in his first season as the RMU quarterback, has shown some flashes of being the long-term answer. Getting those moments consistently has been the bane of the offense, and at this point in a two-win season, the Colonials just need to go back to square one. Find some way on offense to get some yards and points, and go from there. ETSU is the most favorable match-up defensively the Colonials have left, and it doesn’t have to be pretty for RMU, it just needs to be better than the 208 yards and zero points from last week’s game.

2. Play closer to the defense of old, not the recent unit

The point here may seem a little confusing after reading it, so allow me to clarify. To begin the season, the Robert Morris defense was a force no one could handle, not allowing a 100-yard rusher until their fifth game, while doing enough against the pass to either keep games close or earn the win. Recently, that script has flipped, with the defense stifling the pass (allowed 116 and 167 yards in their last two games) but becoming more susceptible to the run (214 and 161 yards in those same two games).

East Tennessee posts offensive numbers that are fairly close to each other (24.2 more yards passing per game than running), and both fall below a 200 yards per game average (173.8 passing, 149.6 rushing). Allowing ETSU to reach its average in passing is a lot better than allowing it to reach their rushing average, especially given how the Colonials have fared when allowing teams to get the ground game going (a shutout loss to CCSU last week and a nine-point loss to rival Duquesne the last two weeks). By returning to the defense from earlier in the season, the Colonials should also return to similar results (such as when they started 2-3).

One telling stat for the Buccaneers offense this season: 75 percent of their offensive touchdowns have come from rushing the ball. An even worse number for the Buccaneers: against just four passing touchdowns this season, they’ve thrown 11 interceptions. Granted, not all of those numbers were purely from within twenty yards of the end zone. However, it does tip East Tennessee State’s hand to reveal their dependency on the run to score.

As mentioned in the point above, the Colonials showed earlier this season that they can stuff any ground game they want. The closer the Buccaneers get to the goal line, the more likely they are to try and pound it in. The Colonials should prepare for that, and prevent the backs from finding the end zone.

I know I mentioned the Colonials going back to their old style of defense in point #2, and that included focusing more on the run than on the pass. I stand by that point, and offer this one as a sort of add-on to both that point and the third one. Stopping the run (and therefore grounding half of ETSU’s offense) should be the first objective defensively this weekend for RMU. But after that, instead of allowing the Bucs to find success in the pass, capitalize on a statistic mentioned above: ETSU’s 4-11 touchdown-to-interception ratio.

When the Buccaneers pass, they make mistakes. The Colonials, with 19 sacks and eight interceptions on the year, are a team that has forced mistakes and capitalized on them previously. By pressing receivers and harassing them all game, especially later on when passing becomes even more important, the Colonials are making passing that much harder, and putting themselves in position for what would be an inevitable error from East Tennessee State’s offense – an error that could potentially win the game for RMU.