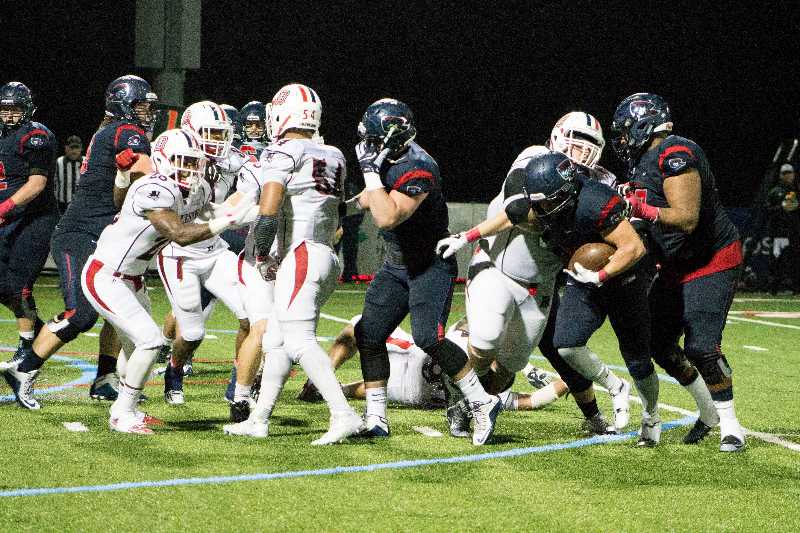 One week after putting up season-worst numbers offensively, the Robert Morris Colonials rebounded well, winning a game against East Tennessee State handily, 21-9. The Colonials (3-6, 1-3) have a tough two-game NEC schedule to close out their season, with games against the second and third-place teams in the conference. The first game is this weekend, against second-place Saint Francis (5-3, 3-1), a team that has plenty of offensive firepower (three games and an exhibition with over 40 points). Here are some keys for the Colonials to pull off the NEC upset.

The Colonials have relied on their ground game offensively much of the season, and it has provided over 120 yards per game as a result. One thing the Colonials have not done yet, however, is try a multi-headed attack intentionally. The season saw Rameses Owens begin as the starter, get knocked out by injury, and Cole Blake take over the starter’s job. The frontman now appears to be Blake, but with both backs showing promise in the time they’ve had this year, why not try using both of them?

The Red Flash allow 138 rushing yards of per game, which is much more attainable for RMU than the 162 yards of passing SFU has also been permitting this year. The Colonials have not had a game this year where two backs had 15 carries each, and the closest they came was against Notre Dame (OH), where Owens averaged 3.9 yards on 14 carries and Blake averaged 5.4 on 25 carries with a touchdown; both backs helped lead RMU to an offensively-fueled victory (their 35 points in that game remain a season-high by over 10 points).

Blake and Owens are both sophomores – trying this style of offense against a team that is more susceptible to the run than the pass is a strategy that can utilize both talented backs now, and possibly be applied to games for the next two years.

Against South Dakota State, I wrote how the Colonials needed to try stopping just one receiver, Jake Wieneke, rather than the entire passing offense. Wieneke had been on the receiving end of the heavy majority of Jackrabbit passes, and stopping him would take away the only consistent target the team had. In the game against RMU, Wieneke caught seven passes for 163 yards and two touchdowns, while RMU lost 34-10.

Which brings me to this week: Saint Francis passes for 213.4 yards per game. Of the 126 passes caught, Terell Smith has 44 (35%); of the yardage, Smith stands at 813 (47.6%), and his six touchdowns are over half of his team’s total this season. While the percentages may not look severe initially (with the exception of the touchdowns), Smith has more than twice as many receptions as the next closest pair of receivers on the roster. Neutralizing him neutralizes the biggest aspect of SFU’s passing game.

Defending the pass has been the Colonials’ Achilles’ heel this season defensively, and eliminating the biggest threat Saint Francis has to offer to beat the Colonials will go a long way toward giving Robert Morris a large cushion to work with throughout the contest.

3. As a secondary focus, watch Anthony Abeid as well

Smith may be leading the Red Flash in yardage receiving, but over the last three games, Abeid is posting numbers similar to Smith’s: Abeid’s yardage is within 50 yards of Smith’s (283 to 234), and he actually leads in receptions, 16 to 14. While the numbers say Smith should garner the heavy attention of the Colonials’ defense (he also caught two touchdowns in that three-game span, while Abeid had none), Abeid is also worth keeping track of, especially if Smith is shut down and Saint Francis begins looking for a new top option.

The Colonials have been stronger against the pass than the run in recent weeks after beginning the season as a unit better against the ground game, and are more than capable of shutting down the top target and containing the secondary option as well.

4. Win the battle of “Team Statistics”

While offensive and defensive numbers look good and are remembered from the stat sheets, there is a section labeled “Team Statistics” that many overlook, and that section is where the Colonials will need to succeed to beat Saint Francis. Saint Francis has three points from that section that bear significant importance to Robert Morris.

The first is penalties. SFU is a very undisciplined unit compared to their opponents this year, with their 65 penalties nearly doubling the combined total of their opposition; RMU would be wise to allow SFU to inflict damage upon themselves with mistakes, while not committing any unnecessary ones themselves.

The second point lies in the third-down conversion rates. SFU has been posting a similar rate in that regard to their opponents, winning the battle 39 percent to 35 percent. They are likely to find success against RMU (who allows 31% success) but are also likely to give up just as many first downs on third-and-something plays, opportunities the Colonials need to capitalize on frequently to sustain long scoring drives (an area of occasional weakness for the Colonial offense).

Finally, Saint Francis exposed something against CCSU last week that RMU should take advantage of: an inability to finish drives. Saint Francis needed five field goals to win last weekend, and only scored one touchdown (in the fourth quarter). The Colonials haven’t scored with consistency this season, but when they do, they tend to find the end zone for seven instead of settling for three. It will be a challenge, but if the Colonials can hold SFU to a field goal and then follow up with a touchdown twice in the first half, they enter the second half with a touchdown lead on their opponents, something that has been hard to come back from against RMU this season.