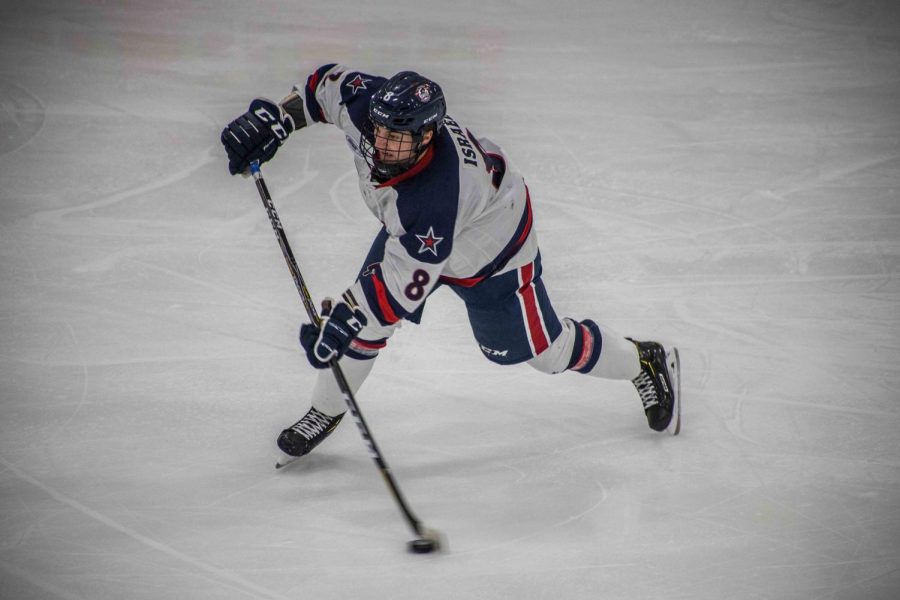 PITTSBURGH — The Robert Morris men’s hockey team (4-3-1, 3-2-1 AHC) looked to come off strong from their split the previous weekend against RIT as they welcomed the Niagara Purple Eagles (2-5, 2-3 AHC) to Colonials Arena Friday night. The Colonials were looking to gain key points and just their second conference win in order to move up in the AHC standings and topple Niagara out of a respectable fifth place.

The first period started off as a stalemate for nearly the entire frame, with both teams trading decent chances but the goalies staying strong. After several penalties and no power-play goals for either side, the Purple Eagles finally struck with just 19 and a half seconds left on the clock in the first, when captain Nick Farmer took a picture-perfect feed out of the corner into the slot and one-timed the puck past netminder Francis Marotte to give Niagara the 1-0 lead. Just when it looked like RMU would be going into the intermission trailing, some great tenacity and puck play in the far corner of the Niagara zone led to a near buzzer beater of a goal. With just one-tenth of a second left in the period, Nick Prkusic fed a quick pass to senior Kyle Horsman who chipped it past Purple Eagles goal Brian Wilson to tie the game at one and give the Colonials hope and a new slate heading into the break.

The second period began with RMU killing off a key penalty which they successfully did to start the middle frame strong. Despite putting themselves back in the box a couple of minutes later, Daniel Mantenuto sped down the right wing with Alex Tonge on a two-on-one, calling his own number as he did so, and whipped a wrister past Wilson to put the Colonials in front 2-1 and sent RMU into the second intermission ahead.

The final frame was back and forth with nobody gaining any huge chances at either ends and the goaltenders once again starred. Both the Colonials and Niagara had several breakaway opportunities but couldn’t put the puck away. Then with just three minutes left, and after back to back timeouts by both teams, the Purple Eagles took an odd route, pulling their netminder for an extra attacker. This would eventually backfire seconds later, as the puck was easily pushed up to Luke Lynch at center ice. The Pittsburgh native put the puck into the empty cage to put the Colonials up 3-1 and all but and ensure an RMU victory. The offense did not stop there, as both captain Brandon Watt and Michael Coyne both got breakaways through stellar stick checking opportunities, but couldn’t beat Wilson. With that, the final horn sounded and the Colonials got a much needed win to start the month of November.

Defenseman Alex Robert commented on how the intermission after the first period and Kyle Horsman’s last-second goal emboldened his team heading into the second period. “We really knew we had to get out there and get a lot more physical,” said Robert. “I think we showcased that in the second and third… It was huge for us not being down 1-0. It allowed us to go out there and establish our identity.”

Center Daniel Mantenuto, who scored the game-winning goal also gave his take on RMU’s staunch defensive play to shut down Niagara’s offensive opportunities particularly in the second and third. “We have a tight locker room in there. We’ll battle for each other. It gets people going when we block shots, make hits, shut ‘em down at the end of the game. It’s huge for us, and it’s huge for morale.”

Head coach Derek Schooley, like Robert, also commented on what he termed a “lackluster” first-period effort from his team. “I had to be hard on them and have them wake up a bit,” said Schooley. “And I give them credit for receiving the message and putting it into action.”

Schooley added, “Our defense has been much better and our goalie was outstanding.”

Robert Morris outshot Niagara in shots on goal 30-13 and didn’t allow a shot throughout the entire second period. The same two teams face off in a rematch tomorrow at 7:05 p.m. at Colonials Arena.