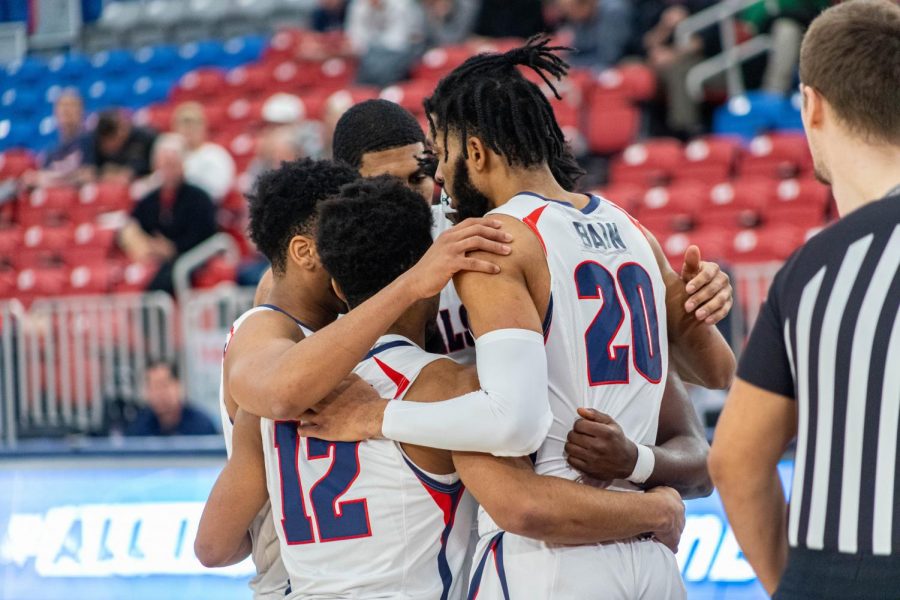 MOON TOWNSHIP– The Robert Morris Colonials (9-10, 5-1 NEC) wrapped up a four-game homestand with a win over the Sacred Heart Pioneers (10-9, 3-3 NEC). RMU pulled away late in the game to secure a, 67-55 win. Junior forward AJ Bramah had a historic night as he tied the Robert Morris program record with 20 rebounds. His final stat line read 18 points, 20 rebounds and a perfect 9-9 shooting line.

The Pioneers took an early lead off an E.J. Anosike layup. This would be the first and last time Sacred Heart had the lead for the remainder of the game.

Robert Morris jumped out to a 23-7 lead thanks in part to a 16 point scoring run. A scoring run that showcased the depth scoring for the Colonials.

The bench scoring was lead by Bramah. He double-doubled in the first half with 10 points and 11 rebounds.

Bramah credits Anosike’s physical play to his success coming off the bench.

“He is a very physical player,” said Bramah. “He knows how to rebound. I knew I had to come out today and own the glass. He was tough. I tried to battle with him. He’s 245 pounds.”

The Pioneers went ice cold in the first half, shooting just 10-31 from the field. SHU shot 2-11 from three-point territory.

Robert Morris led 34-25 when the horn sounded for half time.

Sayveon McEwen provided a spark coming out of halftime. McEwen, the senior guard, hit back-to-back jumpers and finished the night with 12 points in 11 minutes of action.

“I knew I could make shots,” explained McEwen. “These are shots I take in practice. Most importantly, believing I’ll make the shot.”

“He’s got the Vinnie Johnson ‘microwave’ action,” said Toole. “10 shots in 11 minutes. He’s a guy we encourage to go in, shoot and score.”

The Pioneers would cut the lead down to six points, 48-42, around the midway point of the second half.

RMU would pull away yet again and ultimately win the game, 67-55.

Even with the win, Toole still mentioned his team’s lack of focus for the entire game.

“Your focus is like a muscle,” explained Toole. “You have to start flexing it more to make it stronger. I thought some guys were engaged at different parts of the game, and then quickly became disengaged. You can’t do that if you’re going to beat some of the better teams in our league.”

The Colonials head to the Big Apple for their next two games. The first of which will be against struggling St. Francis Brooklyn Terriers (8-10, 2-4 NEC). That game is scheduled for Thursday night at 7 p.m..