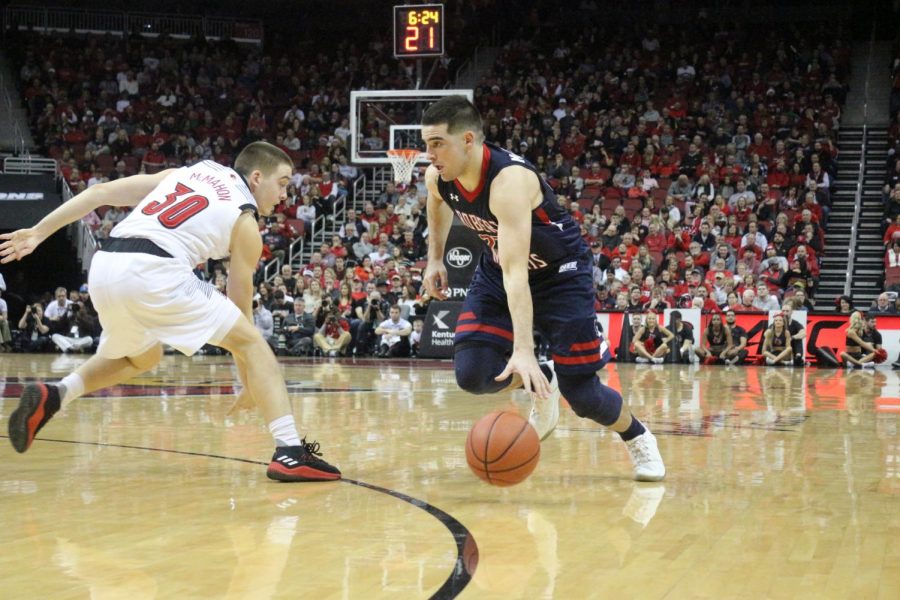 LOUISVILLE — The Louisville Cardinals (9-3) flew past the Robert Morris Colonials (4-8) Friday night by the score of 73-59 at the KFC Yum! Center in Louisville, Kentucky. This game concluded the tough non-conference road schedule that the Colonials embarked on in the 2018-19 season which featured three power-five teams.

“It’s a great experience for our guys … I think that it’s our job as coaches to provide our guys with great memories. I think that guys will remember coming to the (KFC Yum! Center) and playing against Louisville and being able to compete at a reasonable level for a majority of the game,” said Coach Andy Toole about his team’s performance.

The Colonials got off to a great start with a corner three-point shot by Charles Bain to open the scoring. Louisville’s Steven Enoch was problem for the Colonials early, as he scored four points early for the Cardinals.

The Colonials were rolling and had a 23-17 lead with 9:47 left after a Charles Bain breakaway dunk. Bain led all scorers with seven points at this point in the first.

Through the first twelve minutes of the game, six Colonials found the scoring column, while only four Cardinals had scored. The Colonials played tough defense along the three-point line and forced the Cardinals to take many bad shots.

“I thought we played pretty well even though it didn’t show on the scoreboard and thought we did a lot of good things in the first half … we made the right plays,” said senior guard Matty McConnell.

A three-point shot by the Cardinals’ Jordan Nwora gave them a 40-39 lead with 14:51 left in the second half. Josh Williams then converted a mid-range jumper out of the media timeout to give a 41-40 lead before a three-point shot was converted by Darius Perry to make it a 43-41 point game.

Louisville got their first double-digit with ten minutes left in the half.

Louisville began to pull away, after taking a 58-43 lead after Enoch converted both free throws before the media timeout. With 7:24 left in the game, they were outscored 31-13 in the second half.

A layup and a converted and-one by Charles Bain brought the game within ten with 3:33 left in the game.

The Colonials ended up losing the game after fighting hard in the closing minutes.

A 20-2 second half Louisville run propelled the Cardinals to their ninth win of the season. The Cardinals also made 22-of-27 free throw attempts.

Charles Bain led the Colonials with 18 points and Malik Petteway added 10 points and five blocks. Jordan Nwora and Steven Enoch led the Cardinals with 19 and 16, respectively.

Enoch gave the Colonials problems all night with his 6-foot-10 frame and caused Mendy and Petteway to each commit four fouls. Enoch also had played AAU basketball with Petteway growing up.

“(He’s) a big guy who is very explosive and strong in the post … it’s going to prepare us a lot,” said senior forward Malik Petteway.

This loss marks the eighth of the season for the Colonials. They play one more non-conference game at home against Hood College (7-4 DIII) before beginning the Northeast Conference (NEC) schedule at home on January 3rd against Fairleigh Dickinson (5-6).