Men’s basketball looks to bounce back at home vs. Geneva 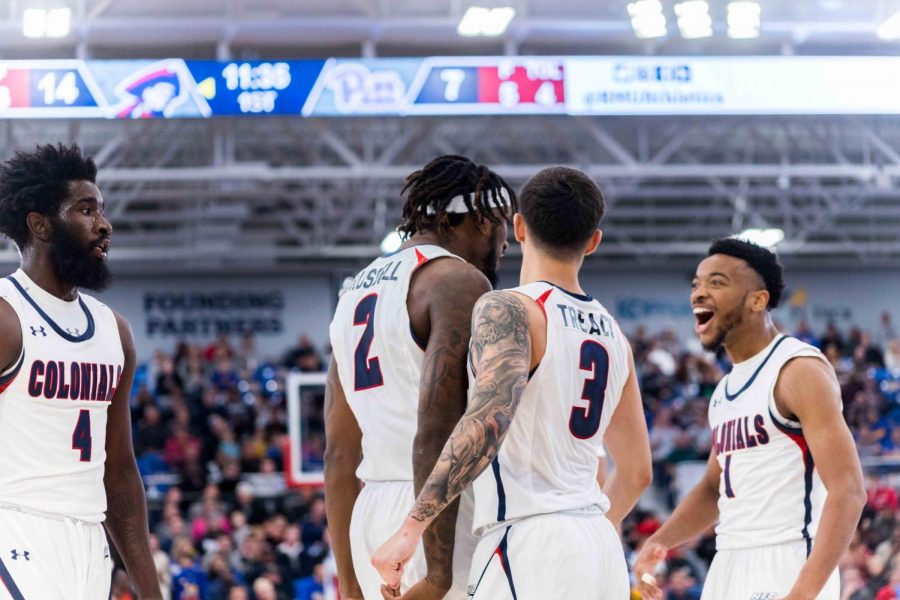 MOON TOWNSHIP– After a hard-fought loss on the road over the weekend at Big East’s Marquette (3-1) the RMU men’s basketball team (1-6) returns home Wednesday night. They play host to Geneva (2-3) at the UPMC Events Center before the Thanksgiving holiday and other upcoming non-conference matchups.
Previewing RMU
The Colonials return home after losing three out of four games on the road. This stint was capped off by a loss at Marquette on Saturday afternoon. RMU led at halftime 20-19 and kept the game close throughout. The team trailed by three points in the final minutes but could not complete a second-half charge needed to take home a victory. Sophomore guard Dante Treacy led the Colonials with 14 points and was the driving force for Robert Morris in their last game.
Scouting Geneva
The Golden Tornadoes enter 2-3 on the season and have played multiple close games all year. Geneva traveled to Meadville, PA to take on the Allegheny College Gators (5-1) before the Colonials. It should be a difficult task for the team on a back-to-back to come out with the same energy and intensity two nights in a row against good competition, especially with Thanksgiving right around the corner.
Players to Watch
Dante Treacy (Robert Morris)

Dante Treacy has been a capable young player for the Colonials this season as the team’s main ballhandler. The sophomore guard is averaging the second-most points per game on the team with 8.4 and shoots an impressive 38% from three early on.

The Colonials senior leadership is driven by Williams and his ability to score the basketball. The Colonials guard is averaging 11.3 points per game to lead the team. His numbers are not that impressive for someone leading their team in points, but the three-point specialist has recorded a 32% mark from behind the arc so far.

Moose has been an offensive force all season long for the Golden Tornadoes. The senior guard is averaging 24.3 ppg this season and shooting 33% from the three-point line. Look for Moose to be the go-to option for Geneva when they need a big shot.

Damazo, a senior, has also been a good scoring option alongside Moose. Damazo, from Blackhawk high school, has averaged 17.3 ppg and is shooting a solid 49% from the field in this young season.
Prediction
The Colonial’s second home game of the season will be their first home win in the new UPMC Events Center. The Thanksgiving celebration will start early for Robert Morris thanks to a solid bounce-back win over Geneva.