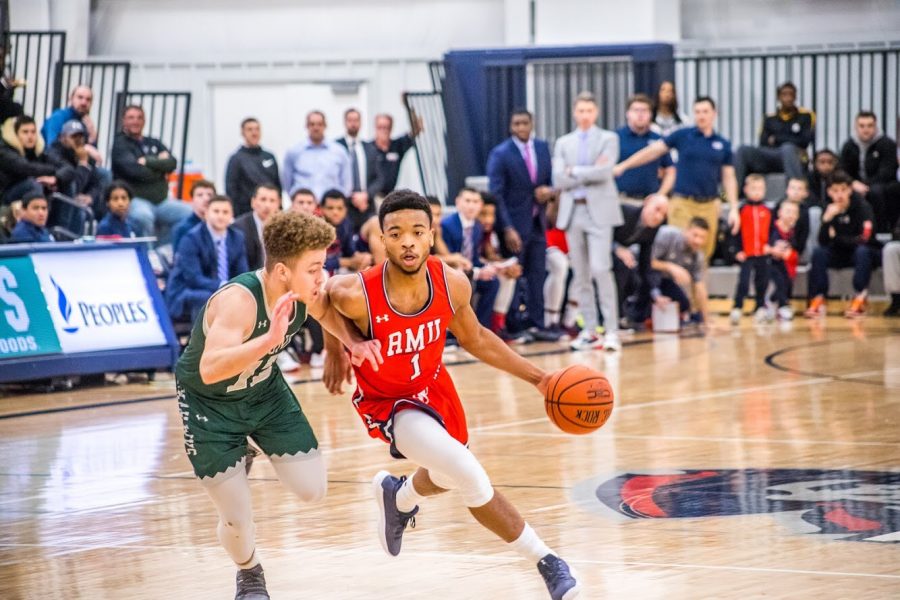 “Obviously it wasn’t pretty on offensively,” said RMU head coach Andy Toole. “But that’s what you get when Robert Morris and Wagner play each other.”

When looking at a team like Robert Morris, the first thing that comes to mind is defense. The Colonials came into this game leading the conference in scoring defense. Robert Morris allows just 67.0 points per game. Wagner’s defense is also impressive. Their 69.5 points per game against average, is good enough for third place in the NEC.

Robert Morris opened up the scoring in the contest. Sophomore, Jon Williams hit a three pointer late in the shot clock to start the Colonial offense. Yannis Mendy, a junior from Metting, France, added a layup before the teams traded buckets.

Head coach Andy Toole went to the bench early and Malik Petteway checked into the game. Petteway, who is averaging 10.6 points per game, made his presence felt immediately. Petteway finished the first half with seven points and five rebounds. Matty McConnell was held scoreless in the first half, but contributed with six rebounds. Wagner’s Nigel Jackson went into the break with 11 points and four rebounds. At halftime, the Colonials led the Seahawks 24-19.

The Colonials held the second-best scorer in the conference scoreless in the first half, Wagner’s Romone Saunders. Saunders came into this game averaging 18.3 points and 6.9 rebounds per game. The second half was a different story as Saunders broke out in the half. Saunders ended the game leading all scorers with 16 points. He also grabbed nine rebounds.

Robert Morris started the second half on a 7-2 run. With four minutes to go in the second half, business began to pick up. The Colonials held a slim 44-41 lead over Wagner. A foul sent McConnell to the free throw line. He made both of his free throws and gave the Colonials a 46-41 lead.

After that, Romone Saunders made a shot to make the score 46-43. Yannis Mendy was then fouled away from the rim. Mendy was only able to make the second free throw as the Colonials pushed the lead to 47-43. Wagner’s Elijah Davis made a pair of free throws and shrunk the gap to 47-45. Jon Williams was able to force a jump shot to go down giving the Colonials a four-point lead.