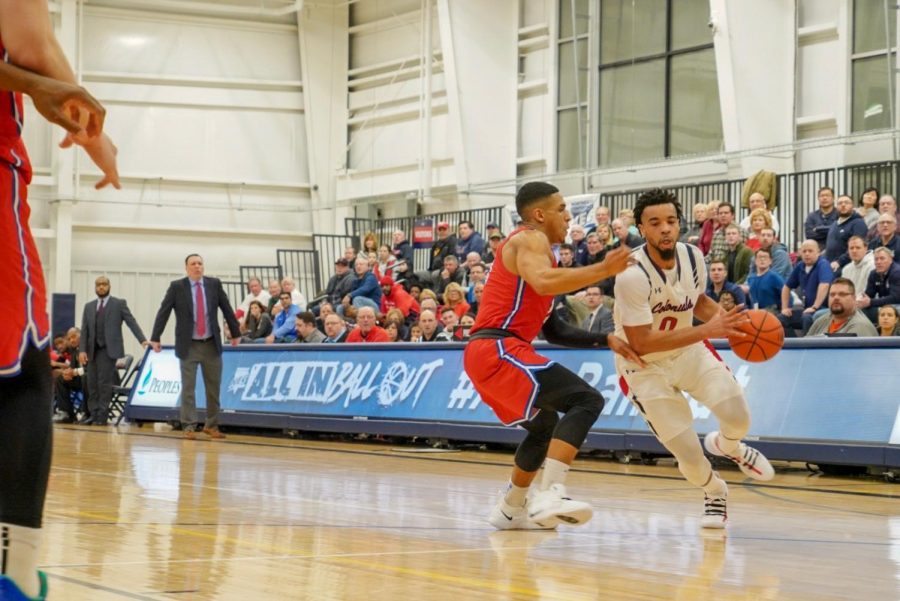 MOON TOWNSHIP — In the first ever playoff game in the history of the North Athletic Complex, the Robert Morris Colonials (17-15, 11-7 NEC) defeated the Terriers of Saint Francis Brooklyn (17-15, 9-9 NEC) in overtime by the score of 69-65. The Colonials came back after being down 15 at halftime, 37-22. The comeback win tied their third largest comeback win in program history.

The game started out with a Matty McConnell two-pointer, but it was Saint Francis Brooklyn who pulled away first after a 14-8 to start the game. During that run, Charles Bain hit a pair of three-pointers to keep the deficit from extending past six.

For much of the remaining half, the Colonials were able to keep pace with the Terriers. At the last 6:31 media timeout, the Colonials trailed 20-16. Despite cutting the lead to four, they had eight turnovers at this point and only three Colonials had scored. Those three were Charles Bain (8), Matty McConnell (6) and Josh Williams (2).

The remaining time saw Saint Francis Brooklyn extend their lead to 15 as they went on a 10-6 run to close the half. At halftime, the Terriers led the Colonials 37-22. In the first half, Robert Morris shot 34.8% from the field and had ten turnovers.

“We obviously didn’t have a good first half and I didn’t think that was the way to send me and Malik off,” said McConnell. “I told these guys, I said, I don’t want to go out like this, and they had my back and we rallied in the second half and credit to them for all the fight that we gave. We just didn’t want to lose the game like that.”

Things started to look up for Robert Morris though in the second half. The Colonials shot out to a 9-2 run to cut the lead to eight at 39-31. A timeout called by the Terriers stopped the clock at 16:58 with all the momentum on the Colonial side.

Coming out of the timeout, a Josh Williams layup pulled the team within six and ended the Colonials impressive run at 11-2. A couple of minutes later, a media timeout stopped the clock at 15:20 and the Colonials trailed 41-33.

Part of the reason that Robert Morris was able to come back is that Saint Francis Brooklyn got into foul trouble. With 12:18 left they already had six team fouls against them. Nonetheless, they were able to extend their lead back to double-digits at the second media timeout as they led 47-37 with 11:27 left to go.

For the next five minutes, Josh Williams kept the team within the game as he hit a pair of three-pointers that kept the led within ten. In fact, this was much of the remaining half. At the last media timeout at 3:21, Josh Williams, Charles Bain (13) and Matty McConnell (10) combined for 40 of the team’s 47 points.

The Colonials were able to pull within four in the next minute as Malik Petteway scored four unanswered points to make it 55-51 with 1:42 left. McConnell then took charge for the Colonials as he hit a three to pull them within one at 55-54 then, after a Terrier foul shot, hit the tying two-pointer at 56-56. Saint Francis Brooklyn was forced to take a timeout with 6.2 seconds left as they tried to set-up a game-winning shot.

“We’ve had a couple of these recently where we played really well in the first half and have not been able to finish it,” said Saint Francis Brooklyn head coach Glenn Briaca. “We got to figure this out.”

The Terriers were able to drive to the hoop, but the layup was blocked by Petteway and the game was sent into overtime.

“What a gutty performance by our guys in the second half,” said coach Toole. “To be able to come back, tie the game, send it to overtime and then I thought in ovetime, played with great poise and great execution.”

After a violation by Saint Francis Brooklyn during the jump ball gave Robert Morris the ball to start overtime, a Petteway layup gave RMU the lead at 58-56. It was their first lead since the score was 8-6 to start the game.

“We lost the rebounding battle and we also lost the turnover battle,” said Saint Francis Brooklyn guard Glenn Sanabria on why they lost. “When you lose those categories it’s going to be kind of hard to win, especially when you’re on the road.”

A pair of foul shots by McConnell pushed the Colonial lead to 60-56, at this point McConnell had 17 points a mark that McConnell has hit in five of his six career NEC postseason games. He finished with a career postseason high of 21 points.

”I think it’s the word postseason that gets me,” said McConnell. “When I think of postseason, I think of win or go home and obviously, I don’t want to shut it down yet. It just gives me that extra drive and we just have to do it everyday now.”

The Colonials were able to hold onto their lead for all of overtime. Saint Francis Brooklyn did come close though as, with 23 seconds left, McConnell was called for a foul and that send Jalen Jordan to the line. He hit both foul shots and pulled his team within one. The Colonials tried to get the ball up court but turned it over at half court. Jordan’s three-point attempt was no good and McConnell went to the line for two.

McConnell made both, which put the score at 67-64 with 10.4 left. RMU was able to withstand the final Terrier attack and the Colonials pulled away 69-65. McConnell and Josh Williams were the game’s leading scorers as they both finished with 21 points with Josh Williams scoring 19 in the second half.

“I think they (Saint Francis Brooklyn) did a good job trying to take me out of the game in the first half,” said Josh Williams. “Then in second half, I think I settled in more and found better ways to get my shot off and some guys (Robert Morris) found me. At the end of the day, in my mind I was thinking, I can do something, whether it be offense or defense, to give the team a spark.”