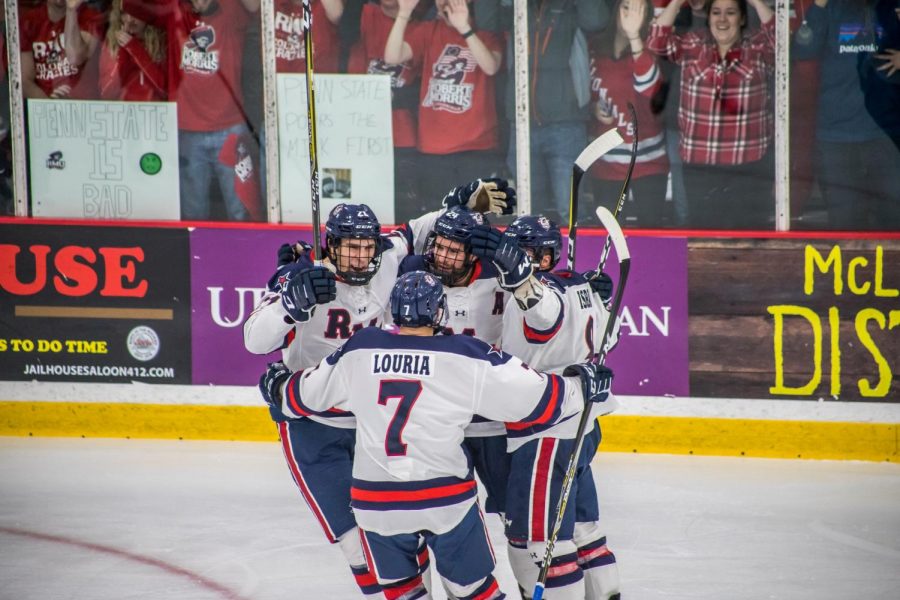 PITTSBURGH — The Robert Morris men’s hockey team (3-6-1, 2-3-1 AHC) were looking to rebound from a tough non-conference loss as they hosted the Penn State Nittany Lions (8-1) from the Big Ten Conference Saturday night at Colonials Arena. The rink was packed to the rafters with fans from both sides and promised to be an action-packed contest from the drop of the puck and a newly erected student section from the Colonial Crazies.

The first period did not start out ideally for the Colonials, as the Nittany Lions struck just over a minute in when Liam Folkes put a backhand by Francis Marotte to give the Nittany Lions the 1-0 lead. The Colonials didn’t help themselves only a minute later as Alex Robert hit his man into the boards from behind, resulting in a five-minute major penalty and a game ejection. Even though they were down, Robert Morris kept fighting and not only killed off the major but also equalized the score when Alex Tonge fed Luke Lynch to tie the game at one apiece.

Then, fortune started to shift for RMU when Penn State took several penalties and the Colonials jumped into the lead on the power play. Tonge got on the scoreboard off a cross-ice pass which he gunned past PSU netminder Peyton Jones to put RMU ahead 2-1. However, the Nittany Lions responded again with two quick goals from star forwards Nikita Pavlychev and leading scorer Evan Barratt. Despite this, the Colonials again refused to stay down and with seconds left on the clock, Nick Prkusic took advantage of a miscue by Jones and flipped the puck over him to tie the game at three heading into the break.

The second period saw the Colonials start to unravel. Despite tying the game at four on Tonge’s second of the game, RMU couldn’t stop Penn State’s offense throughout the rest of the frame. Goals by Kris Myllari, Nate Sucese, Sam Sternschein and Max Sauve helped bolster PSU’s lead to 8-4 and had Robert Morris scrambling to get back in the game after changing netminders from Marotte to freshman Reid Cooper in the middle frame.

The third was undoubtedly firmly controlled by the Nittany Lions. The offensive onslaught continued as Myllari’s second of the game along with goals from Alex Limoges and Cole Hults helped put the game firmly out of reach for Robert Morris. However the main positive on the night was Alex Tonge who got the hat trick when his goal at the 9:43 mark made it 11-6 in favor of PSU. With that, a wild series came to a close with a combined scoring total of 17-8.

Head coach Derek Schooley was not really sure of what to say following the loss. “It’s hard to get your head around it. You compete hard and you score six. … You try to control your emotion. That second period seemed like it was the longest period ever. We just need to be better from the blue line in.” Schooley did feel however that the power play looked good at points. “We put [Alex] Tonge back on the half wall and he had a good offensive game. A lot of guys had good offensive games. … At the end of the day, I hope that gives our power play some confidence.”

Tonge, despite his hat trick, said, “It didn’t really mean all that much…I mean, we got outscored 11-6…” He also expressed disbelief at the result. “I don’t know how to explain it really. I don’t think that’s ever happened in program history. It’s an eye-opener. On the other side, we buried six goals. At the end of it, it should be a win. I don’t know how to fathom it.”

Robert Morris was outshot by Penn State in final shots on goal. The Colonials will take a much needed Thanksgiving holiday break before returning to action with a home-and-home with I-79 rival Mercyhurst, first on the 23rd at 7:05 p.m. at Colonials Arena, and then the rematch on Saturday in Erie.