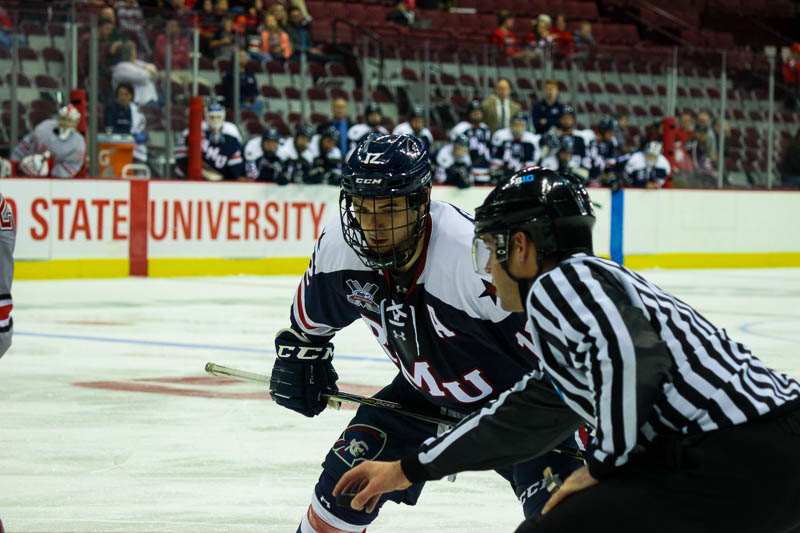 Last night, the Bentley Falcons entered the game on the brink of elimination from the AHC tournament. However, they were able to fight off the Colonials Saturday night and force a game three. The 4-3 victory for the Falcons gives them the momentum heading into the final game of the series, but one bright spot for RMU was their penalty-killing efforts. Despite allowing two goals, the penalty-killing units kept the game close even though the team was a man short multiple times throughout the third period of play.

Although RMU suffered multiple penalties again tonight, the Colonials were able to emerge victorious with a final score of 3-2. For the first two periods of this game, penalties were once again the story line. Coach David Schooley talked about the penalties after the game, saying, “You would’ve thought that we were the most penalized team in the nation this weekend. We’re the second least-penalized team in Atlantic Hockey going into this weekend. I can’t understand it.”

Schooley felt that the Colonials “had targets on our backs for penalties” and he continued to say that he will “chalk this up to an aberration, anomaly, anything of why we were penalized so much this week.”

The coach even jokingly remarked about the strength of the Colonials saying, “We also are really strong, because they fell real easy a couple times.”

The cheery Schooley even joked that maybe the team should not lift as much because “we were pushing them around.”

The special teams factor was huge from the start as the game kicked off and almost immediately as the Colonials headed back to the penalty box. Sophomore defenseman Alex Robert was sent to the sin bin just two minutes into the period for hooking. Then, while killing the penalty senior Spencer Dorowicz was also sent to the box for slashing, thus giving the Falcons a 5-on-3 advantage for about a minute. RMU was able to kill off the 5-on-3 and then the subsequent power play.

The physicality of the final game of a series was prevalent throughout the first period as both teams traded hits. Then finally, nearly 14 minutes into the period redshirt junior Michael Louria was able to beat Bentley goaltender Aidan Polino on a wrap-a-round to put the Colonials in the lead at 1-0.

Shortly after this, Dorowicz made a return to the penalty box, this time for hooking. During this penalty kill, junior Alex Tonge was sprung out of the defensive zone. He carried the puck in with one defenseman covering him, Tonge then deked around the defender onto his backhand, pulled the puck back to his forehand and flipped the puck over Polino’s shoulder into the net to put the Colonials up 2-0 with his shorthanded effort.

However, before the power play would expire the Falcons were able to cut the Colonial lead in half with a tic-tac-toe play that resulted in a goal by senior Kyle Schmidt. Schmidt’s goal cut the RMU lead down to 2-1 heading into the first intermission.

The second period of play would continue with the same high-paced physical action as the first. Then, nearly halfway into the period Bentley would draw even with RMU with yet another power play goal. Freshman Charlie Marchand was able to bury the puck behind the Colonials’ goaltender Francis Marotte to draw the game even at 2-2.

This tie would not last very long, as five minutes later the Colonials would take the lead once again. This time it was sophomore Daniel Mantenuto who was able to jam the puck behind Pelino in a mad scramble in front of the Bentley cage.

Before the period would end the Colonials committed their seventh penalty of the game as freshman Nick Prkusic was sent to the box for boarding as RMU continued to be ill-disciplined. Once again however, RMU generated a short handed chance, but Eric Israel’s shot on a 2-on-1 was stopped by the pads of Pelino.

Although Pelino made the pad save, the Colonials already had enough goals to win at 3-2. The third period went by quietly with the exception of a few spectacular saves from Marotte. One thing the Colonials were able to do in this period was stay out of the box and allow the two teams to play 5-on-5 hockey. An area where Schooley thought the Colonials were “outstanding.”

Marrotte was also pleased with how the team played at even strength saying “we played a great game 5-on-5.” The sophomore goaltender also mentioned that it was a matter of shutting down the Bentley power play and that the Colonials did this when it mattered most.

Alex Tonge also spoke the Colonials’ 5-on-5 efforts tonight saying that the team “dominated” at even strength. Mantenuto stated that it was a “hard-fought” series but a good one for both the team and himself. He continued to say that the team needs a good week at practice to keep the momentum going next week.

Hopefully for RMU the momentum from this series win will help propel the team into next weekend, as the Colonials will take on Holy Cross next weekend in the AHC quarterfinals.