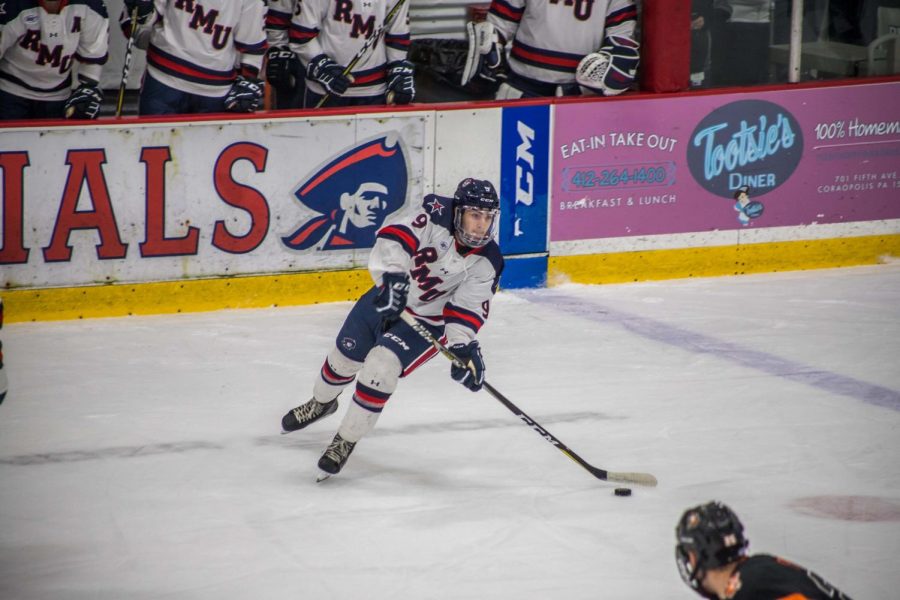 PITTSBURGH -The Robert Morris men’s hockey team (9-18-1, 8-13-1 AHA) looked to earn a split and crucial points on Saturday evening as they hosted a rematch with the Sacred Heart Pioneers (10-13-3, 9-9-2 AHA) who earned their first ever win on Colonials Arena ice in the previous night’s 6-2 victory over RMU, the victory came largely thanks to the scoring of Vito Bavaro and Austin Mcllmurray who each netted 2 goals in the win for the Pioneers.

The opening period of play started off in a physical deadlock, with neither team budging an inch in the opening half of the game. Sacred Heart had an early look on a cross-crease feed to Nick Boyagian, who just tapped the puck over the crossbar at 17:33.

Both teams had a multitude of opportunities, with Francis Marotte needing to make a sprawling save just three minutes later after the Pioneers tried a wraparound that left the puck in the blue paint. However, this gritty style of play from SHU led to their first tally at 6:40 left in the opening period as Jordan Kaplan deflected in a wraparound pass from a near-impossible angle to give the Pioneers a 1-0 lead on his seventh of the year assisted by Marc Johnstone.

The second period seemed to start strong for Robert Morris. However, despite numerous chances early on in the middle frame, the Colonials could not get any decent scoring opportunities, even after grabbing two power plays over the course of the frame.

The Colonials then paid dearly for getting too lackadaisical at their own blue line. The Pioneers stole the puck, raced down the ice, and with their man out of the box, they converted on a one-two punch that put them up 2-0 on Austin Magera’s seventh goal of the season, with the assists going to Zach De Concilys and Jason Cotton. With that, Robert Morris found themselves yet again in a hole and things were about to get even worse.

Despite stellar saves from Marotte in the final few minutes of the second, the Colonials were on the receiving end of a five-minute major for boarding to Justin Addamo which saw him ejected from the game. The Colonials got the penalty down to two minutes and 11 seconds, and were awarded some four on four hockey when SHU’s Mel Melconian was sent to the box for hooking with seven seconds left in the period, but yet again the Colonials couldn’t get any good scoring chances and went into the third still down a pair.

If the third period was any indication of how Robert Morris was going to be for the rest of the contest, the word to describe their effort was simply hungry. RMU came out flying in the opening minutes of the final frame and killed off Addamo’s major penalty but struggled with getting the puck to the net for the rest of regulation.

Many times they would wait at the blue line looking to let a blast go, only to see the Pioneers block nearly every shot and send it down the ice. The Colonials were awarded another power play with 11:44 left on the clock when Magera was sent to the box for holding. In addition, the Colonials had an extremely difficult time just gaining the Sacred Heart zone, not being able to get any good looks on Pioneer netminder Josh Benson.

Then luck seemed to change for RMU. On their fifth power play of the game, the Colonials finally broke the goose egg as the executed a flawless sequence that, combined with solid puck battles along the boards, led to Daniel Mantenuto potting a feed from Michael Louria and Alex Tonge to put RMU on the board and trim the deficit to one.

Despite pulling Marotte twice, the Colonials comeback came too little too late and Magera shot the puck into an empty cage to seal a Sacred Heart win 3-1 and give the Pioneers their first two wins ever on Neville Island over the course of the weekend.

Junior forward Michael Coyne said that despite being on what was the most productive line all evening for RMU, drawing the penalty which led to Mantenuto’s power play goal that gave the Colonials hope for a comeback, the loss still stung. “There’s no quit in us.” Coyne remarked, “…it just sucks coming up short again, after being in this slump for a while.” Coyne added that RMU is, “trying to take all the positives we can from this” and that they are, “trying to encourage each other” in order to boost morale on the bench.

The Pioneers outshot the Colonials in final shots on goal 34-18. The Colonials will head into a bye this coming week, before regrouping for a must-win series against the Holy Cross Crusaders in Worcester, MA on February 15 and 16. Game one of that series is on Friday at 7:05 p.m. with the rematch the following evening at 5:05 p.m. at the Hart Center. The team returns to Colonials Arena on March 2 at 7:05 p.m. for the second game of a home-and-home against I-79 rival Mercyhurst in a game that could determine playoff seedings and possible home ice in the postseason. Stay with rmusentrymedia.com for all the latest as the Colonials wrap up the regular season.