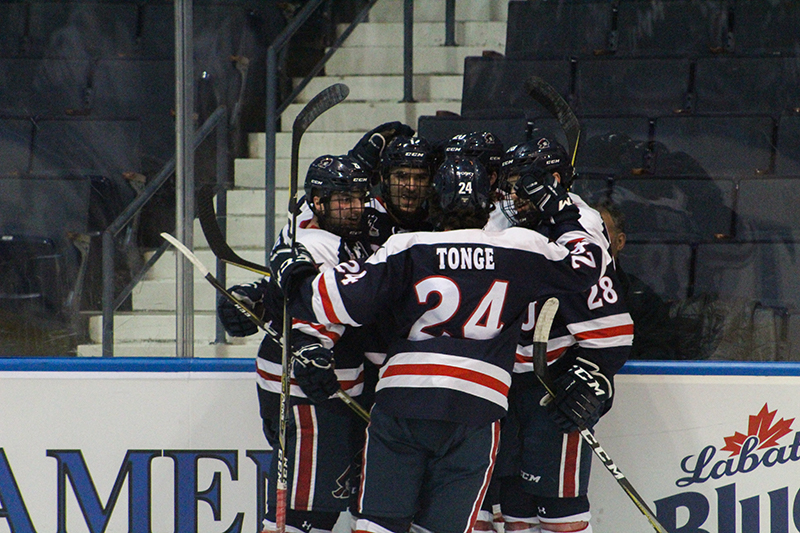 The Robert Morris Colonials men’s hockey team begins their quest for a second Atlantic Hockey title in an exhibition match-up at Colonials Arena this Sunday at 4:00 p.m. as they host the Brock University Badgers from St. Catharines, Ontario.

The Colonials are looking to build off of last season’s success in which, despite losing five of their last six regular-season games, they progressed all the way to the Atlantic Hockey championship game. There they defeated Bentley in three games in the first round, sweeping Holy Cross in two games in the quarterfinals and winning a thrilling semifinal matchup against top-seeded Mercyhurst in overtime 5-4.

Despite their crushing loss to Air Force in the AHC title game and the graduation of several key seniors who were able to put up points in buckets offensively, including Hobey Baker Award nominee Brady Ferguson. Robert Morris is looking to build a winning culture based around a core of hungry young freshmen balanced with several veterans that they hope will produce a winning combination on the ice. Before the puck drops on the 2018-19 campaign, let’s take a look around Atlantic Hockey at some potential powerhouse teams, and highlight some of the aforementioned “young guns” looking to make their mark in an RMU jersey:

Atlantic Hockey Powerhouse Team Picks:
Air Force Falcons (defending Atlantic Hockey champions)
The Falcons are coming off a tremendous effort last season as their offense seemed to click in every scenario no matter where they were on the ice. Despite finishing admirably at fifth in the standings with a conference record of 13-11-4, the Falcons were determined to defend the title they captured in 2016-17 and they soared past every opponent they faced as the postseason began. They fended off the Black Knights of Army in a decisive game three overtime victory in the AHC Quarterfinals, blanked Canisius 3-0 in their semifinal matchup and thrashed the Colonials in the championship game 5-1 as they captured their seventh AHC title and went back-to-back for the first time in school history. Air Force then pulled off one of the biggest upsets of the 2018 NCAA Tournament, powering past no. 1 seeded St. Cloud State in the West Regional before falling to the eventual national champion Minnesota-Duluth Bulldogs in the regional final by the score of 2-1.

Despite the loss of leading scorer Erik Baskin, the Falcons still have plenty of potencies on offense and in net with seniors Evan Giesler, who tallied 22 points last year, and netminder Billy Christopoulos who finished last season with a .922 save percentage and was named MVP of the Atlantic Hockey Tournament last year. Needless to say, it is no wonder the Falcons topped the USCHO.com preseason media poll and will be looking to keep the title in Colorado Springs for the third time in the last three years.
Mercyhurst Lakers (eliminated by Robert Morris in AHC semifinals):
If there was any shock that stunned Atlantic Hockey fans more, it was the comeback overtime victory by Robert Morris over the top-seeded Lakers in last year’s semifinals. Down late in regulation, Brady Ferguson single-handedly put RMU back in the game, tying the score at four apiece. But it was what happened in the extra frame that proved anything can happen in college hockey, as Michael Louria took a carom off the end boards before backhanding the puck by Mercyhurst goalie Brandon Wildung to send the Colonials to the championship.

The Lakers had a near-perfect regular season last year, posting a 16-8-4 conference record as they swept Sacred Heart 2-0 in their quarterfinal playoff series before falling to RMU. Similar to Air Force, despite losing leading goal-getter Jonathan Charbonneau and goalie Wildung, the Lakers still have a star with senior forward Derek Barach, who led Mercyhurst in points with 38. Expect the Lakers to be looking for revenge against the Colonials when the two teams meet for the first time this season on Nov. 23 at Colonials Arena.
Canisius Golden Griffins (eliminated by Air Force in AHC semifinals):
The Griffs were yet another surprise in the regular season, as they occupied the top spot in Atlantic Hockey for nearly the entire year before being edged out by the previously mentioned Lakers after a back-and-forth battle for first place late in the season. Posting a 17-11 record, the Griffs were led by junior Dylan McLaughlin who, like Robert Morris’s Brady Ferguson, was also up for the Hobey Baker Award last season and it’s easy to see why. McLaughlin led the entire team in goals with 18, assists with 30 and overall points with 48. Also impressive was sophomore Nick Hutchison, who tallied 16 goals and 15 assists for a total of 31 points.

With these offensive powerhouses still in the lineup for Canisius over the next couple of years, do not be surprised if the Griffs make a run to the championship game either this year or next year to try and bring the Jack Riley Memorial Trophy to the city of Buffalo and Western New York.

Now let’s take a look at some key players to watch for Robert Morris:
Colonial Players to Watch:
Aiden Beck (Freshman F, 6-2 185 lbs.):
The graduate of Montour High School in McKees Rocks and a native of nearby Coraopolis, Beck was initially committed to play for rival Canisius before switching his choice to RMU and deciding to stay home to play college hockey. In addition to playing varsity hockey at Montour, Beck competed in the junior-level North American Hockey League for three seasons, contributing 22 points (10 goals) in 87 games for the Wilkes-Barre/Scranton Knights and Springfield Jr. Blues. Be on the lookout for the hometown product to make an immediate impact when he steps on the ice.
Luke Lynch (Junior F, 5-11, 209 lbs.):
Another local native, hailing from Shaler Township, Lynch exploded last season by tallying 37 points in all 41 games last season. He did most of his damage at even strength as he scored just three goals and six assists with RMU on the power play. He also came out of the gate firing at the beginning of last year, as he got at least one point in 16 of his first 20 games. Expect big offensive production and a ton of scoring from the junior in what may prove to be his most dominant season on the team yet.
Alex Tonge (Senior F, 5-10, 171 lbs.):
The native of Kingston, Ontario is coming off a stellar junior season last year, in which he matched his offensive production from the previous season, netting 44 points (17 goals) in 41 games to rank second on the team and No. 17 in Division I. He also went on a tear late in the season, as he had at least a point in 22 of RMU’s final 28 games that were capped off by a seven-game point streak from Feb. 24 to March 16. Like Lynch, do not be surprised if Tonge finds the back of the net quickly, early and often in his senior season, in what should be a year that he will match if not exceed his previous season’s totals.

As always, RMU Sentry Media will have continuing men’s hockey coverage throughout the 2018-19 season, both at home and on the road. Be sure to visit rmusentrymedia.com and follow us at @RMUSentryMedia on Twitter.