Men’s hockey splits with RIT after falling in game two 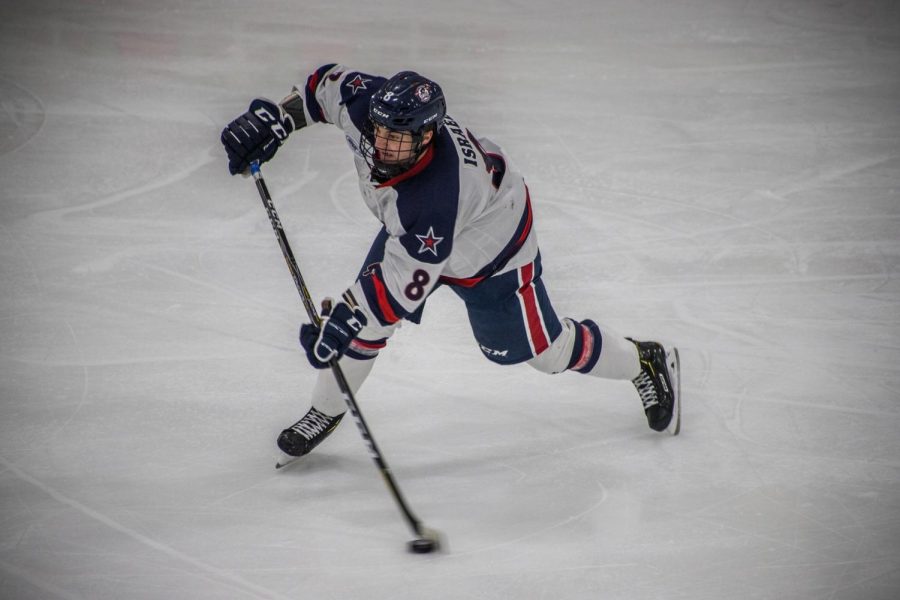 MOON TOWNSHIP — The Robert Morris men’s hockey team, (2-3-1, 1-2-1 AHA) ended their two-game Halloween weekend homestand with a split with the Rochester Institute of Technology Tigers (3-2-0, 1-1-0 AHA) as the team fell 2-1 in overtime this Saturday at Colonials Arena.

Both teams battled hard till the final buzzer and it showed as nearly any goals were allowed in regulation. The first of the only two goals in regulation came early as freshman defenseman Nolan Schaefer took a boarding penalty at 1:49. This put RIT on the power play. RIT’s power play went two for six on the night. It was Abbott Girduckis who scored the first of these two power-play markers, his third goal of the season, which put RIT up 1-0.

An early goal didn’t sink RMU though, as both teams skated with each other, each having their share of opportunities. Goaltending was stellar for both as Francis Marotte stopped 28 of 30 shots, and RIT goalie Logan Drackett stopped 33 of 34 shots. Puck luck seemed to lack for RMU as there was no shortage of opportunities for scoring, with a couple shots that hit the post, and even an early blown call from the refs that could have easily led to an RMU goal. Despite all of this, the lamp was only lit once and that was by RIT.

The hockey gods didn’t shed light on RMU until the third period when an RMU player broke the curse if you will, that player being freshman Nick Lalonde. The goal came on the power play 4:30 into the third, and was assisted by Kip Hoffmann and Daniel Mantenuto. This marks Lalonde’s first career goal as a colonial.

The freshman in this game truly stood out. They did the little things such icing the puck on the penalty kill, blocking shots, and cycling the puck in the offensive zone, so it was nice to see a guy like Lalonde pick up a gino. Head coach Derek Schooley had the following to say when asked about the large freshman class.

As PA announcer Larry Snyder likes to say, “The third period is our period!” and this was true in the third for the Colonials as they knotted up the game and forced an overtime with the Tigers.

“We knew coming into the third that we had to win a period and we did that, but unfortunately we couldn’t get it done in the end,” stated the goal scorer Lalonde.

Sudden death five minute overtime was required in this one, and with less than 30 seconds left in the frame, RIT’s Gabe Valenzuela scored the game-winner on a rebound for his third of the season. This came on yet another power play, making all goals scored in this contest power play goals.

“They made one more play that we did, and they had another power-play goal than we did,” stated head coach Derek Schooley following the loss.

A loss is never your ideal result, but after the game both the coaches and players made it clear that they were not upset with their effort tonight against RIT.

“Coach and all the guys agree that we put a really good effort in tonight and it’s unfortunate that we get no points out of it, but it’s good that we showed that we can play back to back nights at a high level,” stated Lalonde.

“I like our complete level, I like our work ethic I think the only thing that we need to work on is staying out of the penalty box, it took away some of our momentum and then we take a penalty in overtime in the offensive zone,” Schooley said. He went on and possibly summarized the game in one sentence with the following statement.

“My synopsis is that it was a really good hockey game. Both teams played hard, both teams left it on the line, and both teams gave it everything they had, and it was a college hockey game where there was no easy ice.”