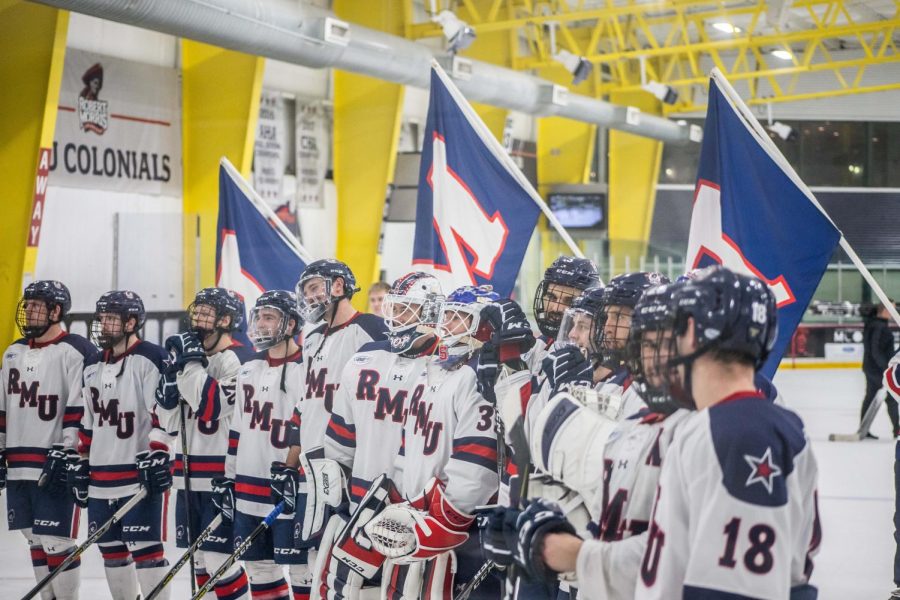 PITTSBURGH — The Robert Morris University men’s ice hockey (14-20-2, 11-15-5 AHA) team swept the Holy Cross Crusaders (10-21-5, 10-14-4 AHA) in round one of the Atlantic Hockey post-season. Game two ended with the Colonials up by a score of 3-2, sending the Crusaders back to Worcester, Massachusetts; and the Colonials on to the AHA quarterfinals for the eighth consecutive year.

At the conclusion of the series, head coach Derek Schooley said, “Obviously a hard-fought series, one goal games. A lot of emotion, a lot of energy and we’re happy to be advancing.” This marks four wins in a row for Schooley’s RMU team, and they seem to be heating up at just the right time; with junior defenseman, Alex Robert said, “Everything’s coming together at the end for us… The way our league’s drawn up it really comes down to what you can do in playoffs, so really excited things are jelling for us right now.”

The pace of Saturday night’s contest seemed to pick up right where these two teams had left off; with both teams throwing around bodies, chipping pucks deep and firing on all cylinders in an attempt to get the first lead of the night.

It showed that the Crusaders were eager to keep their season alive, as Holy Cross forward Ryan Leibold would beat the Colonials usual goalie, Francis Marotte just five minutes into the game.

Throughout the rest of the first period, the Colonials looked to generate some offense, but three penalties against RMU would mean they had to first lock down their defensive zone.

Though the Crusaders would spend a total of five minutes and twelve seconds –over a quarter of the period– with a man advantage, the Colonials held them off on the kill and left the score 1-0 in favor of the Crusaders at the end of twenty minutes of play.

“I thought our second period might have been our best period of the year… It was contagious,” said Schooley.

At just over four minutes into the second period, Crusaders defenseman Will Brophy would trip the Colonials leading scorer Alex Tonge on a breakaway. Tonge earned himself a penalty shot, as he tried to get a shot off while being taken down to the ice.

On the shot, Tonge came in alone on the Crusader’s goaltender, Tommy Nixon. He faked a shot on the blocker side to get Nixon to drop to the ice, made a quick move on his forehand and shelved one past the down and out goaltender to tie the game at one.

Then, with just under seven minutes of play left in the second period, junior Daniel Mantenuto caught a beautiful saucer pass from his linemate Nick Prkusic and rifled a shot down low past the glove hand of Nixon to give the Colonials a 2-1 lead.

A Holy Cross penalty with just over ten seconds left in the second would mean that Robert Morris would start the third period with both a one-man advantage and a one-goal lead.

The final twenty minutes of play was not any different from the first 40, as once the Crusaders stopped the RMU powerplay from growing the lead, Holy Cross was quick to get the pressure going up the ice again. Kevin Darrar, a junior forward for Holy Cross, would tie the game at two with just over a quarter of the way through the period.

Roberts described the RMU bench as “upbeat,” adding “That’s the time to push your teammates even further, the next couple of shifts are very important after a goal like that.”

The game did not stay tied for long, as the Colonials grabbed the lead after freshman forward Nick Lalonde pushed the puck across the goal line during a scrum in the goal crease.

This throng of bodies came as a result of a pass into the slot from Luke Lynch left Justin Addamo wide open with the puck on his stick. The freshman took a shot that bounced off a diving Nixon and landed in prime real estate for the Colonials. Lynch smacked at the rebound, which was blocked away by a defender, before an “absolute scramble in front” as described  Lalonde.

“I think we all knew it was just sitting in the crease… we all just went for it and I was fortunate enough to knock it over the line,” said Lalonde.

When asked if he was confident it was a good goal, Lalonde smiled and said, “I saw some ice [between the puck and the goal line], but I was just hoping the referee saw it. Then I saw him signal a goal. Good news for us.”

Good news for the Colonials indeed, as the goal sealed the Colonials 3-2 victory and has successfully punched their ticket to their eighth consecutive trip to the AHA Quarterfinals. They will play either 2-seed Bentley (16-13-5, 15-9-4 AHA) or 3-seed Air Force (16-13-5, 14-10-4 AHA) in the next round as the AHA playoffs continue.