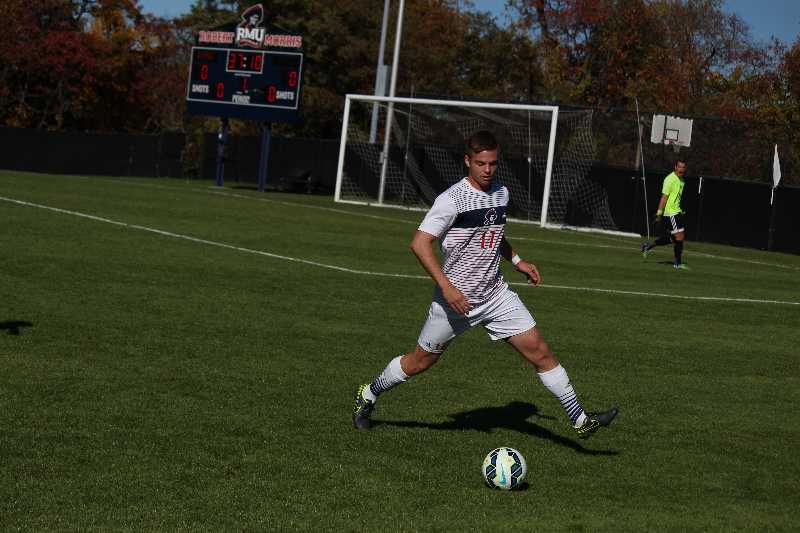 On Friday afternoon, the Robert Morris men’s soccer team (9-6-0, 3-1-0 NEC) earned a 2-1 come-from-behind victory at the North Athletic Complex to prove that they are a force to be reckoned with. This time it was against Fairleigh Dickinson (2-9-1, 0-4-0 NEC), a team that the Colonials have struggled against in recent years, regardless of how their opponent has played throughout the season.

The Colonials struggled to obtain possession of the ball the first half, and let in a goal from the Knights in the 41st minute from a cross into the middle of the box by Jordan Ellison that deflected off a Colonial and into the net for the first of the night.

Entering the second half it seemed like an entirely different match, as the Colonials returned to regular form, but this time not led by star forward Neco Brett.

“As soon as I saw the defender slide and miss it, I knew I was going to be able to get it on goal.” said Sherman about his first career goal. “I just put my foot to it and put it towards goal to see what would happen.”

When asked if he had any other comments on the game, Sherman simply said, “Go Colonials.”

Of course, Robert Morris would not have been able to hold onto the lead if it wasn’t for some incredible saves in the last 15 mintues from goalkeeper Brendan Alfery. Regardless, Alfery showed his team support and gave all the credit to Sherman.

“Honestly when Sherman puts away the goal and when were up one, that’s the best motivation possible,” said Alfery. “When there’s 20 minutes left in the game and you know you can get the win.”

Alfery recorded 8 saves for the day, 7 of those coming in the second half. The Colonials proved that quality over quantity is the way to go, with the Knights recording 9 shots on goal to their 2, but still ending up on top.

With that match, the Colonials now soar to sole possession of second place in the conference standings, and will look forward to hosting Bryant on Sunday in their final home match of the regular season.