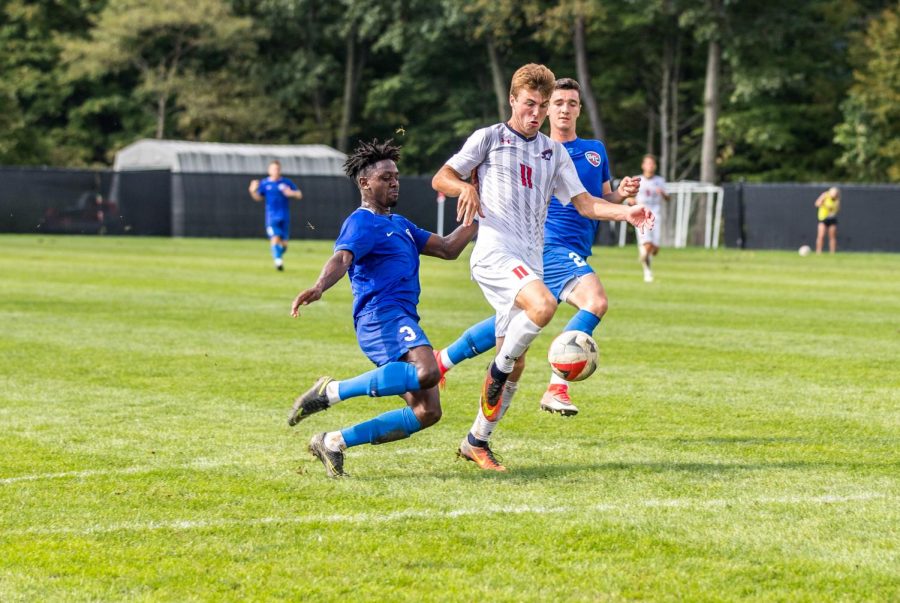 Moon Township, Pa. — The Robert Morris men’s soccer team (4-7-1, 2-1) earned a great homecoming win this Sunday against St. Francis Brooklyn (4-8, 1-2) 1-0 at the North Athletic Complex. Zac Sherman’s lone goal, great all-around play on offense, defense and in net paved the way for an all-around team win against a team almost identical to the Colonials in terms of statistics.

This game was a very intense and entertaining one, as both teams owned roughly the same record, as well as other statistics and were matched up pretty evenly skills-wise.

Early scoring opportunities for both teams all came short as both teams’ defenses played well in this one. RMU’s defense, in particular, was clutch, forcing shots from the outside and only allowing five shots on goal even though twelve were fired. Winter Fondi was tested at times and he held his ground, earning his tenth career clean sheet.

“I think the back four played the best game of the year and they were giving them (St. Francis Brooklyn) nothing, at times they were having possession in our end but they were getting nowhere with it,” stated head coach Bill Denniston after the game.

Physicality played an important factor in this game due to both teams being so evenly matched. Twenty-six fouls were totaled in this game and three yellow cards were handed out, two for SFBK and one for RMU. A couple aggressive slide tackles here and there added to the physicality as well. Down a goal and frustrated with RMU’s tight defense, St. Francis Brooklyn had 10 of their fouls in the second half.

“It’s a physical game and you want to only make fouls when needed, but in games like this where it is physical, it’s tough sometimes for guys to control themselves. Today it didn’t cost us so that’s all that matters,” Denniston stated.

Zac Sherman led the offense as his goal was all that was needed. Sherman had three partial breakaways in the game, two of which he was called for a foul due to being a little too aggressive with the defender. The third, he scored on in the mid stages of the second half for his fifth of the year.

“That’s Sherm, he plays on the edge and mixes it up with everyone he plays with. He plays fast and angry, and most of the time it works for him,” said Denniston.

Fondi tallied his 10th career shutout and was only tested a couple times in this game. RMU’s defense kept most of the shots towards Fondi either off-target or routine saves. One save, in particular, came in the latter stages of the second half with SFBK’s Tomas Deandrade who dribbled past the defense for an up-close shot, but Fondi laid out and stopped it.

RMU got a big homecoming win on a beautiful Sunday, played a complete game, got Fondi a shutout and now has back to back wins.

“It was huge,” said Denniston.

Up next, the Colonials are back on the road as they travel to New Jersey to face Fairleigh Dickinson (3-5-3) (0-1-1 NEC) next Sunday. Dickinson is led by Ahu Obhakhan who has five goals on the season for a total of ten points. The game will be a 3:00 p.m. start and Colonials faithful will hope that the team can make it three in a row in the win category.