Preview: Men’s hockey travels to the Nickel City to take on Canisius 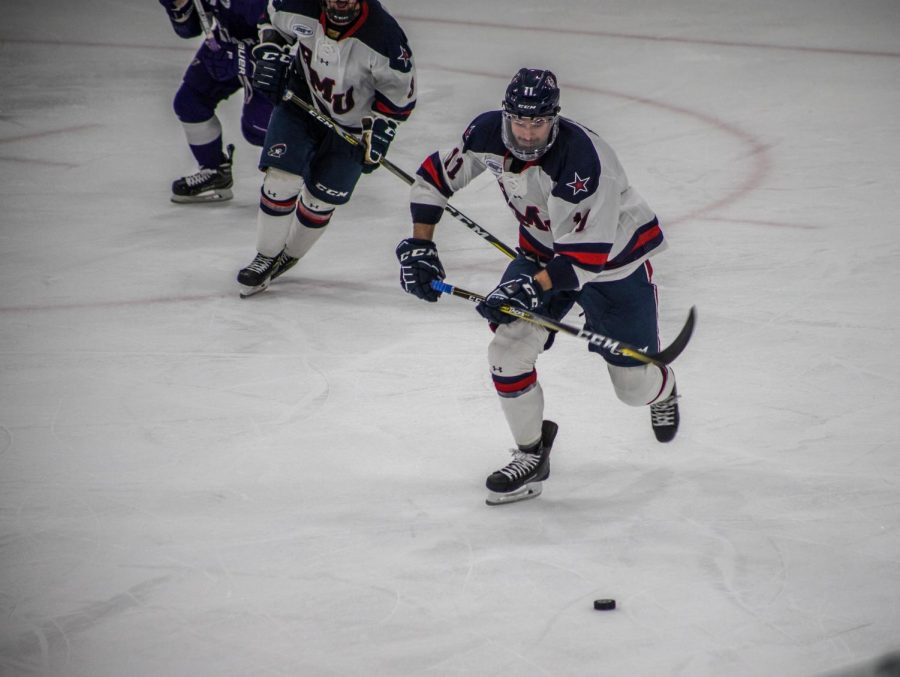 BUFFALO, N.Y. — The Robert Morris Colonials men’s hockey team (8-13-1, 7-8-1 AHA) travels to the HarborCenter in downtown Buffalo, New York this weekend to take on the Canisius Golden Griffins (8-11-2, 5-9-1 AHA). Last year, the Colonials and Griffins split the season series, with the Colonials winning the first game 4-3, and losing the second 4-1.
Recapping RMU
The Colonials are on a bit of a skid as of late, losing their last four, and six of their last seven. Robert Morris’s last win was last year, beating American International (11-10-1, 11-7-1 AHA) in an American Hockey Association matchup 3-1 on December 30.

Robert Morris had goals in the first game by Sean Giles and Nick Jenny, while Jenny scored the lone goal in the final game of the series.

The Colonials continue to have a strong penalty kill, as their .848 kill percentage is good enough for No. 19 in the NCAA.
Previewing Canisius
Canisius was swept in a home-and-home series against the Mercyhurst Lakers (11-11-2, 9-6-1 AHA) last weekend, losing the first game in Buffalo 6-2, and the subsequent game in Erie, Pennsylvania by a score of 6-3.

Grant Meyer and Dylan McLaughlin scored for Canisius in game one, while Blake Weyrick made 18 saves and Matt Ladd made nine saves in the loss.

In game two of the home-and-home, Canisius grew an early 2-0 lead on goals by McLaughlin and Matt McLeod. However, Mercyhurst responded with five straight goals, and the bleeding was stopped by a Matt Hoover goal for Canisius.

While Robert Morris is strong on the penalty kill, Canisius is equally strong on the power play, as they are operating at a .196 percentage, good enough for 36th in the NCAA.
Key players
Alex Tonge (RMU): Not only is Tonge the leading scorer of the Colonials this year, with 19 points (9g, 10a) in 21 games but in six career games against the Golden Griffins, Tonge has five points (2g, 3a). The senior from Kingston, Ontario currently sits sixth in all-time points for the Colonials with 118 (46g, 72a). He is 18 points back of 2009 graduate Chris Margott, who has 136 (64g, 72a)

Dyllan Lubbesmeyer (RMU): Although Lubbesmeyer has only played in three games this year, don’t be surprised if head coach Derek Schooley rides the hot hand this weekend. After regular starter Francis Marotte was pulled in the Colonials 5-1 loss, Lubbesmeyer, a sophomore from Burnsville, Minnesota, played admirably in relief. Lubbesmeyer made 18 saves on 19 shots while playing for 29:41. In his limited appearances this year, Lubbesmeyer sports a 1.58 goals against average and a .957 save percentage.

Dylan McLaughlin (Canisius): McLaughlin has been the leading scorer for the Golden Griffins this year, with 25 points (13g, 12a) in 21 games and had two goals last week against Mercyhurst. McLaughlin sits tied for 11th in the NCAA with Lukas Craggs of No. 9 ranked Bowling Green (15-5-3, 10-4-2 WCHA). Both players have 13 goals in 21 games, good enough for .62 goals per game.

Cameron Heath (Canisius): Heath, a senior from Troy, Michigan, is one of the leading defenders on the Golden Griffins squad this year. In 21 games he has 34 blocked shots, 14 points (3g, 11a) and is a +4; so when he is on the ice, good things tend to happen.
Prediction
Alex Tonge continues his hot streak against Canisius with four points on the weekend, and Dyllan Lubbesmeyer proves to be solid in his first collegiate start, allowing only two goals on the weekend. Robert Morris will win the first game 4-1, while the second game will be a defensive and goaltender battle, with Canisius winning by a score of 1-0. The Colonials penalty kill will have to be strong this weekend against the strong Golden Griffin power play.