Missed opportunities are the key difference in loss to Sacred Heart 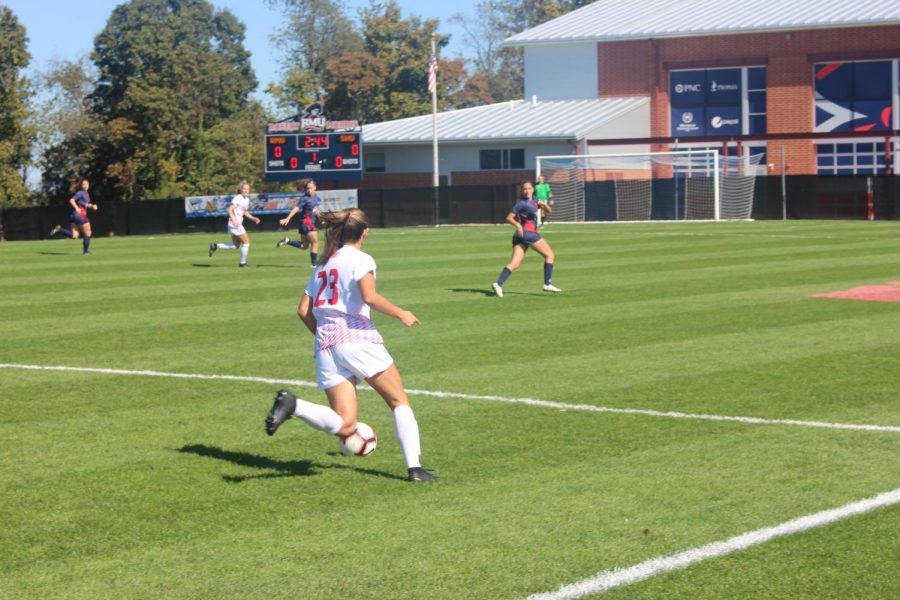 MOON TOWNSHIP– The RMU Women’s Soccer team (4-8-1, 2-3 NEC) notched their third conference loss of the season on Friday against the Sacred Heart Pioneers (6-5-2, 3-1-1 NEC), with the final score reading 1-0 in a closely contested match with missed opportunities being the key difference.

The first half started heavily in RMU’s favor. The Colonials maintained possession often in the first 15 minutes, with a few good chances in the offensive zone. Sacred Heart slowly started to shift momentum, and it eventually resulted in the opening goal of the match.

After a good odd-man break was denied by RMU’s Sydney Bruckner, the play shifted back towards the middle of the offensive zone, and Hannah Busch drilled it in the 23rd-minute to score her first of the season.

After some quality plays for both teams, the final 15 minutes were nearly the opposite of the first 15, as SHU sustained pressure in the Colonials’ defensive zone and picked up some good chances in the process. The first half ended with SHU leading 1-0 and the shots 4-3 for RMU, with each team picking up one shot on goal. Brittany O’Connell led the Colonials with two shots, including their lone shot on goal.

At the start of the second half, Elyssa Kipperman had a couple of terrific saves for SHU while down and out to keep the game at 1-0. Bruckner, not to be outdone, soon picked up a pair of corner kick stops.

Sacred Heart had possession of the ball for most of the first 20 minutes in the second half, including a great free-kick opportunity. They notched another corner kick not long after, with a separate chance that rolled through the box, but more impressive goalkeeping by Bruckner held the score at 1-0.

In the 76th-minute, a free-kick for RMU was sent only a few feet wide to the right. RMU kept the foot on the gas pedal from then on, especially in the final seconds, but they could not get one past Kipperman. The shots ended 10-6 for RMU, with Kristina Kelley leading the Colonials with three shots and two shots on goal.

When asked for his general thoughts on the game, Coach John Kowalski said they “did not give away many chances” and SHU had “opportunistic follow-up after follow-up.”

On the Sacred Heart goal, RMU “gave the ball up in the midfield, had more players, and didn’t clear the ball.” He continued by saying that RMU had a “terrific chance on a breakaway” and “created few chances but good chances” to start the second half. Kowalski added, “I can’t really say we did terrible, but can’t really say we did well.”

RMU falls to 2-3 in conference play with the loss today, and they will look to bounce back in their next game. The Colonials will face Fairleigh Dickinson (5-5-3, 4-0 NEC) at the North Athletic Complex in their next game on Sunday.