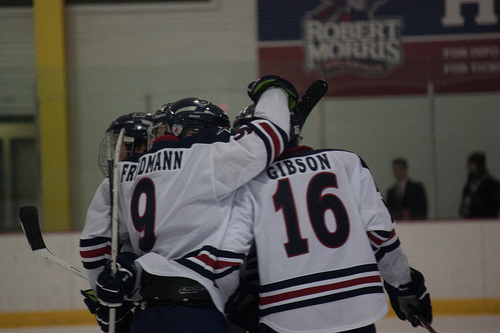 ST. PAUL, MN- Along the bench at Xcel Energy Center, the Robert Morris Colonials stood at and leaned over the boards near the end of their NCAA Tournament game against Minnesota. The scoreboard was gleaming with a four goal deficit and it wasn’t in their favor.

When the clock read double-zeroes, each athlete slowly swung his legs over the boards and pushed himself onto the ice. Somberly, freshman netminder Brandon Lane emerged from between the pipes to meet his fellow Colonials.

With gloomy demeanors, they saluted the few proud fans who made the trek to the state of hockey with a laggard stick tap.

That was the very last time the 26 would convene on a sheet of ice as a team.

As they exited the ice, the arena flooded with applause from their fans as well as Minnesota’s.

“Great fans, classy fans to give us a little applause at the end there,” said senior Colin South with a soft shudder. “It was a fun experience, I think it definitely will add motivation for the guys to coming back to play in front of a crowd like that.”

At the post-game press conference, South, Zac Lynch, and normally stone-faced Schooley were burdened with the emotional baggage that was brought about by the events of the day and their journey leading up to it.

“We never quit. I’m really proud of our hockey team.  I thought we played hard,” said Schooley, a quiver in his voice. “When you spot a team a 4-0 lead it’s really easy for that game to get away from you.  And that game did not get away from us.  We did everything possible.”

Earlier in the day, hockey fans paced the rotunda of an Xcel Energy Center brimming with Gopher fans.  Confused echoes of “Who is Robert Morris” were elicited by a myriad of hockey fans.

After giving the Golden Gophers more than they bargained for, those fans have an answer.

“I hope everybody in Minnesota now realizes why we are in the national tournament and how hard we play,” said Schooley.

Other Atlantic Hockey teams have been in this position before. Some have even pulled major upsets, including Holy Cross over Minnesota, Air Force over Michigan, and RIT over both Denver and New Hampshire.

And the Colonials will be back in this position again, but stronger. As seen in RMU men’s basketball’s NIT Tournament appearance, national exposure can do wonders. Recruitment will improve. Student enrollment at the university could expand. The overall image of the program as well as the school has the potential to change for the better.

As Schooley put it, “It’s a pretty good way to celebrate your 10 year anniversary.”