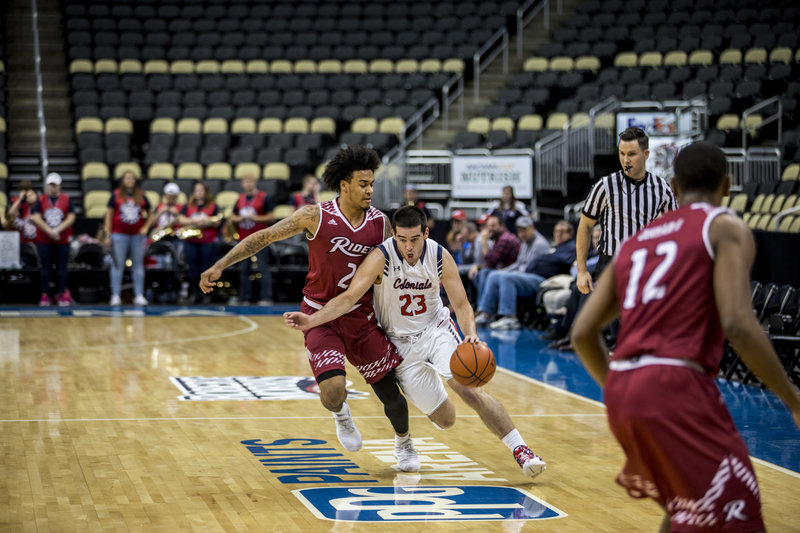 How They Got Here:

Robert Morris was able to get to this game by upsetting No. 2 Mount St. Mary’s Mountaineers (18-14, 12-6) on Wednesday. In the game, the Colonials rode a big 17-2 run, starting at the end of the first and continuing to the second, to grab the momentum and the game. Matty McConnell had another strong playoff performance, finishing with 18 points and 9 rebounds.

While things were close towards the end of Wagner’s game against #8 Central Connecticut State (14-18, 7-11), Wagner never really lost control of the game as they led from the 11:14 mark in the first half till the final buzzer sounded. Wagner had a couple of big offensive performances from Jojo Cooper (20 points, 7 assists), Romone Saunders (18 points, 10 rebounds) and Blake Francis (17 points) that carried them to the 73-61 victory.

Furthermore, Robert Morris has lost six of their last seven games against Wagner. This includes their last meeting in the playoffs. That meeting took place in the first round of the 2015-2016 playoffs of which Wagner won 59-50. That remains to be the only time coach Andy Toole has lost in the first round of the NEC playoffs. Overall though, Robert Morris leads the series 42-31.

After struggling for most of the entire season, Robert Morris’s offense played well enough to get past Mount St. Mary’s. In the first half the team shot just 34.62% (9-26) from the first half. This led to them being down by ten at the half. The offense in the second half though was some of the best they’ve ever played. In the second, Robert Morris shot 65% overall (13-20) and 62.5% (5-8) from the three-point range. That is what gave them the 60-56 victory.

The defense for Robert Morris had the same trend as the offense in the game against Mount St. Mary’s. Robert Morris held their opponents to 7-22 (31.82%) in the second after letting the Mountaineers shoot 43.33% (13-30) in the first and 7-14 (50%) from the three-point range. Robert Morris only generated six turnovers but did outrebound them 35-25.

Wagner by the numbers:

Wagner has been the most well-balanced team in the NEC this season. According to kenpom, college basketball’s top analytical website, Wagner has an offensive efficiency rating of 104.9 (184th) and a defensive efficiency rating of 103.9 (137th). The team though has struggled in certain areas on the offensive side. They have turned the ball over on 19.9% of their possessions, which is 269th in the country. Furthermore, while they have the 71st best three-point percentage in the country at 37.3%, they struggle to score inside the paint as they shoot 47.5% which is 274th in the NCAA.

The defense though has been strong in every area except three point percentage, of which opponents are shooting 35.6% against them (208th). They guard the paint well, opponents shoot 45.1% (18th) and have generated a turnover on 19.9% (86th) of their opponents’ percentage.

Matty McConnell (RMU)- Once again, Matty McConnell finds himself on this list. McConnell is the team’s playoff performer as he seems to play at a new level in the postseason. His last performance saw him score 18 points and grab nine rebounds. Furthermore, he has scored at least 18 in his last three postseason games with 19 and 20 in his two games last year. If Robert Morris is going to win, McConnell needs to play like his playoff self.

Jojo Cooper (WAG)- Cooper is one of the conference’s star players. This season, Jojo averaged 14.4 PPG, 5.3 RPG and 6.2 APG. Those numbers prove how well rounded Cooper’s game really is. He is also the fourth highest rated player in the NEC in terms of offensive efficiency and was a first team all-conference this past season. While Junior Robinson was the NEC player of the year, Jojo Cooper can make the claim that he is the NEC’s most complete player.

Blake Francis (WAG)- Francis is Wagner’s leading scorer this past season. He averaged 17.5 PPG which was a full three points more than star player Jojo Cooper. He also shot 41.2% from the three-point range this season which is among the leaders in the conference. Francis is also a strong defensive player, leading the team in steals per game with a 1.7 average. He was second team all-conference this year.

Romone Saunders (WAG)- When you’re the number one team in the conference you deserve to have three players on this list. The third member of Wagner’s big three averaged just .1 points less than Jojo Cooper at 14.3 PPG. He also was second in the team in rebounds per game at 6.4 RPG. Saunders was also a third team all conference this past season.

Coach Andy Toole has now been to the semifinals in seven of his eight years. The one time they failed to reach the semifinals was back in the 2015-2016 season when Wagner defeated Robert Morris 59-50.

During Robert Morris’s current 15 consecutive NEC playoff appearance streak, they have met Wagner a total of five times. All five of those times have happened in the first round of the playoffs. Robert Morris won three of those five games.

The two teams met the last time Robert Morris won the NEC back in the 2014-2015 season. They met in the first round and the Colonials won the game 91-68.

Wagner has three players (Jojo Cooper, Blake Francis, Romone Saunders) making three different conference teams, but not a single one of them got one of the individual awards.

Wagner is one of the smallest teams in the NCAA with an average height of 74.1 inches or 6.2 feet. That is the 5th smallest team in the country.

Despite that small height, Wagner has gotten an offensive rebound on 35.6% of their missed shots. That is good for 10th best in the NCAA.