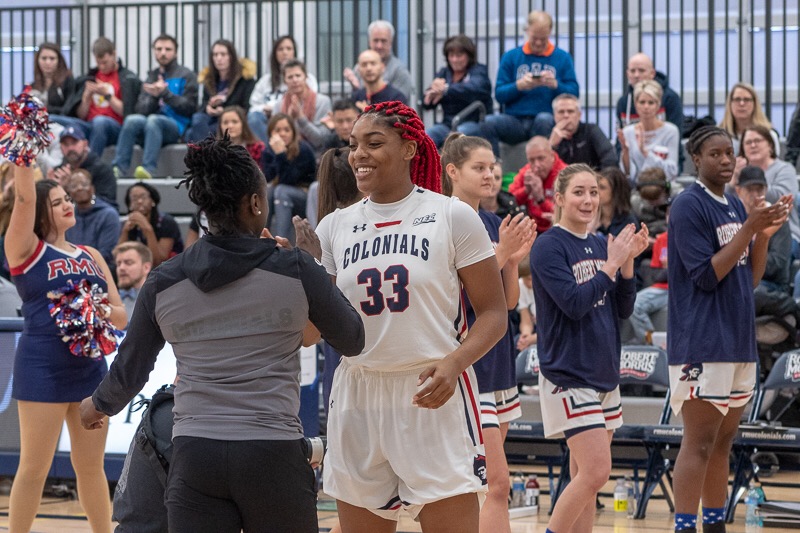 MOON TOWNSHIP — Robert Morris women’s basketball (3-8) finished their worst non-conference start under head coach Charlie Buscaglia with a loss to James Madison (8-3). Fortunately for the Colonials, their conference record is still a perfect 0-0. The Colonials first conference test will come from Mount St. Mary’s (5-5) on Saturday, January 5th. Mount St. Mary’s is one of two Northeastern Conference teams with an even record, the other being St. Francis Brooklyn who is sitting at (6-6) after their non-conference play.

The NEC preseason coaches’ poll has a similar look at the top as it did the year prior. Last year’s top spot belonged to Saint Francis. Behind SFU, in the second position, was a young Colonials team with a strong core of senior leadership. Saint Francis would reign supreme in the end. The Red Flash would beat Robert Morris in the conference tournament finals. This year things are a little different. The top two spots have been flipped. Robert Morris was chosen, by the coaches, to win the NEC.
The Contenders
Saint Francis Red Flash (3-9)
The only name to remember from SFU is senior guard Jess Kovatch. Kovatch, in her junior season, rewrote the record books. She set the NEC record for most points in a season with 831. Her 141 made three-pointers set an NCAA Division I record.

This year Kovatch has led the Red Flash to an 89-83 win over Morehead State. Perhaps even more impressive, the Pittsburgh Panthers needed an overtime period to put away the Red Flash 78-75.

Robert Morris shoots 33.7 percent from the field and is making just 62.3 percent of their free throws. The poor shooting has reflects the 56.1 points per game the team is averaging.

The Colonials defense has been the focus of this team for a long time. RMU is the NEC team to hold teams under 60 points per contest. Opponents have shot 40.1 percent against Robert Morris this season. On the flip side, RMU averages 10 steals per contest.

“We got to be ready to make sure we are sacrificing 100 percent to get ready,” mentioned Coach Charlie Buscaglia in a recent interview, “When conference play comes you hope you have things in great order, but in reality, there are always things you need to work on.”
Bryant Bulldogs
The Bulldogs would be considered a surprise here. Bryant was picked to finish fourth in the preseason poll behind Sacred Heart. Bryan is a team that relies on veteran leadership. Junior Sydney Holloway is the leader of this team.

Holloway averages 18.9 points per game. She also picks up 12.3 rebounds per contest. She picked up her eighth double-doubles of the season in a win against Holy Cross. The forward has also been named the NEC player of the week twice this year.
The Pretenders
St. Francis Brooklyn
St. Francis Brooklyn is the only NEC team this year to average 75 or more points and have a positive scoring margin. The Terriers average 78.0 points and outscore opponents by an average of 3.5 points. SFB has been lights out from the floor shooting the ball at 43.1 percent. All of these impressive numbers have led the Terriers to the top spot in the NEC.

This seems all great until you look deeper. The hot shooting is bound to go cold and the scoring will become tougher. The best way to counter it with a strong defense. Unfortunately, SFB is on the wrong end of the turnover differential. St. Francis Brooklyn is behind by an average of 3.92.
Game to Watch
Saint Francis University at Robert Morris University- Tuesday, March 7

This could be the game that crowns the NEC regular season champions.