Neco Brett has record-breaking night in dominant win over Birmingham 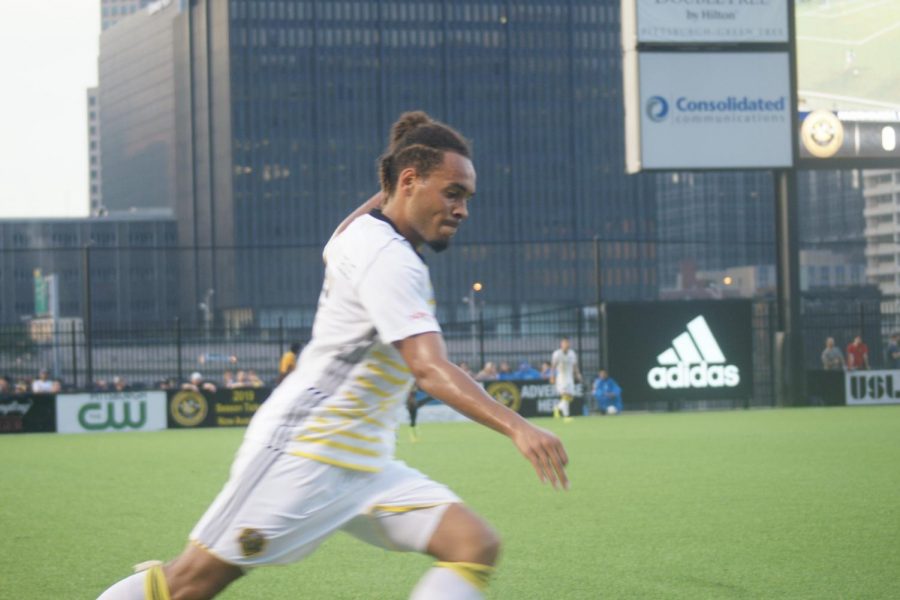 PITTSBURGH — Robert Morris alumnus Neco Brett and the top-seeded Pittsburgh Riverhounds obliterated the 10th-seeded Birmingham Legion FC in the quarterfinals on Saturday by the score of 7-0. Brett scored a hat-trick in the first half for the Riverhounds, which set two postseason records for the team in the process. Overall, he had four goals in the match, which is tied for the most in a single match in team history.

The first goal for the Hounds came in the 13th-minute when Mohammed Dabo found Brett in the box. Brett’s goal gave the Hounds a 1-0 lead that they didn’t come close to relenting. Just three minutes later, Robbie Mertz tried to find Brett in the box. While he didn’t find Brett, he did find the head of Birmingham defender Kyle Fisher. The deflection was enough to get the ball past the goaltender for Birmingham, and the Hounds jumped out to a quick 2-0 lead.

Steevan Dos Santos found Brett in the box for another goal at the 27th-minute. Seven minutes later, Brett was tripped in the box by the keeper. This set up a penalty kick for Brett, who scored and completed the hat trick at the 34th-minute.

“When I got in the locker room, I realized that everyone was locked in,” said Brett. “Whenever I get in the locker room and the guys are like that, normally we bring our A-game. I was looking forward to a game like this. Not this many goals, but a good game.”

Four minutes were added to extra time, but the Riverhounds didn’t need that much to score their fifth goal of the half. Jordan Dover found the back of the net while being assisted by Ryan James. The Riverhounds ended the first half, in front of a sold-out and wet crowd, with a 5-0 lead.

“Right now I think it’s just kind of elation that we were able to come out and put together a performance like that,” said Mertz. “I think everyone can agree, it’s probably our best of the season, and to be doing it at this time of year is what you want and what (manager Bob Lilley) has asked of us. It’s really special, but we have to re-group tomorrow, enjoy the victory but move on to the next one.”

Zachary Herivaux was handed a red card in the 61st-minute after a foul in the box. This set up a penalty kick for Robbie Mertz, who scored the Riverhounds’ sixth goal.

Brett’s fourth goal was the team’s seventh and final goal, as the Riverhounds defeated Birmingham 7-0. During the game, the offensive attack shined for the Riverhounds as they controlled the ball 62.5% of the time and had seven corner kicks to Birmingham’s one.

“We did a really good job of keeping the hammer down,” said manager Bob Lilley. “At 2-0 or 3-0 that game is not done. We played a really, really strong first half where we’re up 5-0 at half time, and then we kind of know ‘Ok, as long as we don’t do anything stupid and we show up the first 15 minutes of the second, we should be able to run this thing out.'”

The Riverhounds led in many categories on the night, including shots (12-4), shots-on-goal (7-2), passing accuracy (86.2%-73.4%) and tackles (17-12). Overall, it was a dominating performance that should be expected from the conference’s number one team.

The Riverhounds next game will be Saturday, November 2nd at 7:05 p.m. at Highmark Stadium. They will take on reigning champions Louisville City FC, who are coming off of a 2-1 victory over the Tampa Bay Rowdies. Tickets are already on sale for Saturday’s contest.