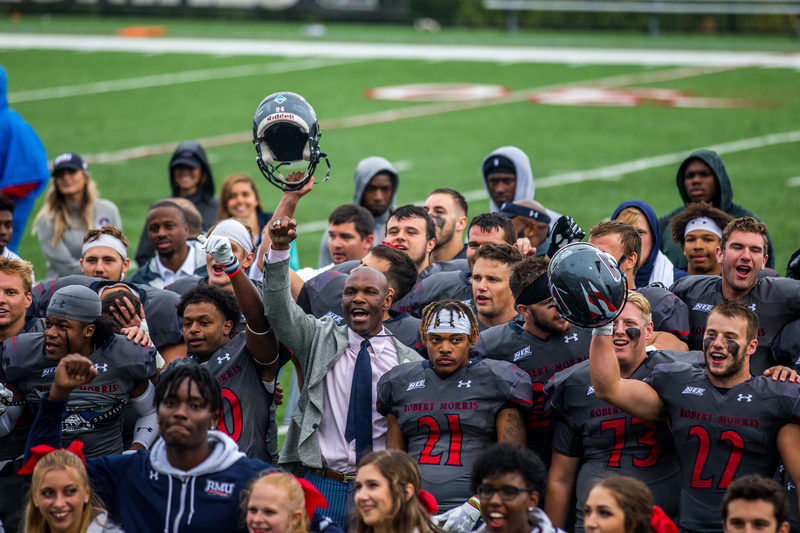 MOON TOWNSHIP– Robert Morris Head Coach Bernard Clark leads the Colonials into battle as they kick off their season on the road Thursday night against the University of Buffalo Bulls. Just mere hours from the start of the Colonials season, many questions still remain. Perhaps the biggest question is who will be under center for RMU this season.

Jimmy Walker finished his senior year last year with 1925 yards and 20 touchdowns. The only other quarterbacks on the roster from the 2018 season, Caleb Lewis and George Martin, combined for just 290 yards and two touchdowns, in a combined 12 appearances.

However, the Colonials currently have seven quarterbacks on their roster, so the door is clearly open at the position. The rest of the Colonials offensive personnel seems to be pretty easy to predict.

Expect the trio of Tim Vecchio, DeLano Madison and Anthony Dellefemine to carry the load for the RMU air raid. Vecchio, a senior, is looking to bounce back from his career-low in yards in a season with 276. With another 300 yard season, Vecchio will land in the top 10 receiving all-time at Robert Morris. Madison, also a senior, pulled down 25 receptions for 326 yards last year. Both statistics were career highs for him. After playing just five games last year, Dellefemine looks too improve upon his nine catches for 125 yards he posted in his freshman campaign.

The Colonials defense is looking for answers after the departures of Adam Wollet, Brayden Thimons and Jon Muelbauer. The three combined for 204 tackles and ranked top five in tackles last season. The Colonials defense needs more than just tackling to have a solid season.

RMU sacked the opposing quarterback just eight times last year. They also had just 16 takeaways last year in addition to eight interceptions and eight fumble recoveries. The Robert Morris defense also gave up 3,034 yards on the ground last year, as well as an additional 2,735 yards through the air. In order for the Colonials to win, there needs to be a serious drop in these numbers.
Players to Watch
Matthew Gonzalez

Gonzalez posted one of the best seasons from a Colonials receiver in recent memory. The senior tight end stands 6’3” tall and weighs 230 pounds, runs routes well and is strong enough to make catches in traffic. Don’t be shocked if Gonzalez puts up another 10 or more touchdown catches this year.

This running back duo is going to run rampant on opposing defenses. The contrast in running styles, Stephens being more of a between the tackles runner whereas Jackson is more likely to bounce outside and tiptoe down the sideline, could benefit the Colonials if they choose to put them in the backfield together. These two are going to combine for another 1,300 yards if they can stay healthy.

A sophomore defensive back that showed great potential in his freshman year, Jimenez has all the tools to defend teams top receivers. In seven games last year, Jimenez tallied 30 tackles and one interception.
Prediction
The Colonials will finish with a record of 4-8 this year. RMU will drop the first game against Buffalo. Then Robert Morris will go on to win three of their next four against Kentucky State, the Virginia Military Institute and Youngstown State. Dayton will ruin the homecoming celebrations by beating the Colonials in between Kentucky State and VMI. RMU will go on to lose the next three games to Saint Francis, Wagner and an overtime loss to Bryant. The Colonials will go on to beat the newly formed LIU Sharks in their inaugural season. Robert Morris will wrap up the season with three straight losses to Duquesne, Central Connecticut State and Sacred Heart.