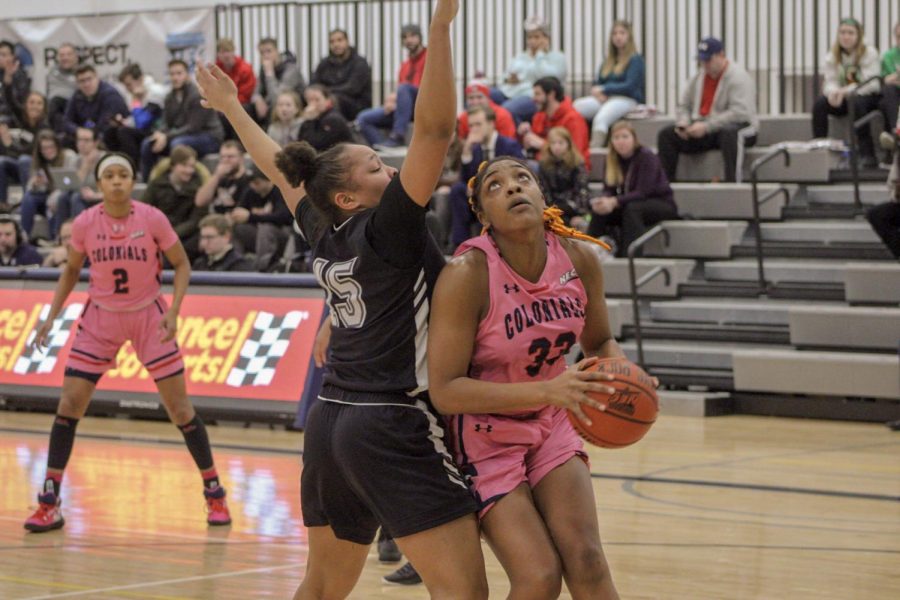 MOON TOWNSHIP — With 5:59 remaining in the third quarter, the Colonials (17-9, 14-1) found themselves trailing for the first time all game. Nneka Ezeigbo didn’t give LIU Brooklyn (4-22, 3-12) a chance to get comfortable out front as she bullied the competition on the way to the basket. Her layup gave the Colonials the lead and they never looked back as they pulled away with the 71-54 victory.

The early story line of this game is the Blackbirds’ match-up problems with RMU’s Nneka Ezeigbo. Ezeigbo has had 16 points in each of the last three games. At the halfway point of the first quarter, the junior center had eight points.

This wasn’t the only problem that LIU Brooklyn was facing in the first quarter. The Colonials’ defense held the Blackbirds without a field goal for over four minutes, but the game continued to stay close.

Both teams had problems taking care of the ball. The Blackbirds gave the ball up six times in the first quarter while the Colonials did slightly better but still lost the ball five times.

Nneka Ezeigbo’s eight first quarter points gave the Colonials a slight edge on the scoreboard. At the end of the first quarter, the score read 15-9.

Ezeigbo continued to be a problem on the inside. She scored the first two field goals in the second half for the Colonials. This didn’t cause LIU Brooklyn to give up however, as they made back-to-back threes sparked a 11-0 run.

That run gave them the lead, 20-19. The Colonials responded quickly as Ezeigbo sparked a 10-point Robert Morris run.

The Colonials dominated the paint in the first half. Robert Morris scored 20 points in the paint compared to the six for LIU Brooklyn. Nneka Ezeigbo lead the charge with 16 points. She also added four rebounds.

When both teams headed for their locker rooms, the score was 31-25, in favor of the Colonials.

The last time these conference foes met the halftime score was 43-17.

“I think we came out strong for the first few minutes,” explained Nneka Ezeigbo. “Then we realized that since they are not playing hard we can lower our standards. Then we decided that we couldn’t let that happen so we came back.”

Before the halfway mark of the third quarter Nneka Ezeigbo had already eclipsed her season high of 18 points. With 6:38 remaining, Ezeigbo made a pair of free throws. Those points gave her 24 on the night. This is a new career high for her.

The Colonials’ lead began to grow. Robert Morris went on a 21-5 point swing in the third quarter. Freshman, Esther Castedo lead the way for the Colonials with a quick five points in the run.

Robert Morris dominated in the third frame as they shot an impressive 64.3% in the quarter. RMU also played unselfish basketball as they dished out six assists. Robert Morris pulled down 14 rebounds and continued to dominate in the paint.

The Colonials held a much more comfortable 20 point lead going into the fourth quarter. LIU Brooklyn trailed the Colonials 54-34.

The fourth quarter was historical for a couple of reasons.

Nneka Ezeigbo made a historical layup with just under three minutes remaining. This layup gave Ezeigbo 30 points on the night. She is the first Colonial to accomplish feat since January 9, 2017 when Anna Niki Stamolamprou dropped 39 points in that game against LIU Brooklyn.

Ezeigbo grabbed 11 rebounds in the game as well. The last time a Colonial went for at least 30 point and 10 rebounds was on March 16, 2014 when Artemis Spanou went off for 30 point and 20 rebounds.

“It feels good,” said Ezeigbo about her performanc. “I actually didn’t know I scored that many points. Of course I can always give it up to my teammates who help me out.”

“(Ezeigbo) was just very steady.” explained Buscaglia, “Just her presence on the court. She was just solid on both ends.”

The Blackbirds offense went through Jeydah Johnson and Brandy Thomas. Johnson finished her night with 17 points while Thomas had 15 points.

Nneka Ezeigbo’s historical night gave the Colonials the 71-54 over their NEC-foes. This win also clinched the Colonials a share of the NEC regular season title. A win in any of their last three games, or a Sacred Heart (15-11, 11-4) will clinch an outright NEC Championship for the women’s basketball team. Robert Morris will play Sacred Heart on March 3rd in Fairfield, Ct.

Robert Morris hits the road as they travel to Staten Island, New York to take on the Wagner College Seahawks (10-16, 8-7 NEC) on Saturday, March 2nd. Tip-off is scheduled for 1:00 p.m.