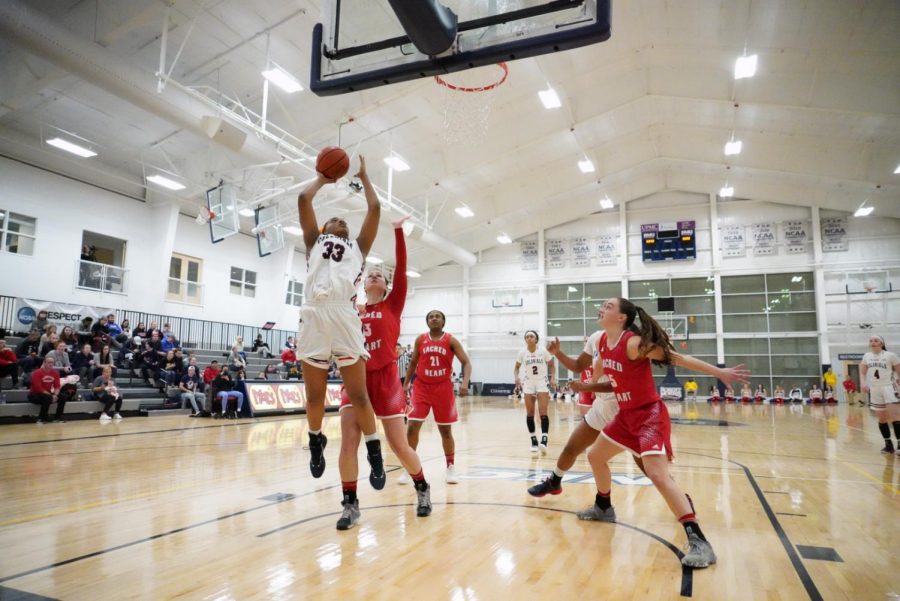 Nneka Ezeigbo makes a play at the rim in the team's 64-46 over Sacred Heart on Jan. 28, 2019 (Tim Kelly/RMU Sentry Media). Ezeigbo became the 23rd player in program history to grab 500 rebounds in the contest.

MOON TOWNSHIP — The Robert Morris University Colonials (11-8, 8-0) faced off against the second best team in the Northeastern Conference, the Sacred Heart Pioneers (10-9, 6-2). The Colonials interior took care of the paint as Robert Morris stayed perfect in conference and pulled away with a 64-46 victory.

The Colonials saw almost everybody score in the second quarter. Robert Morris had four players with at least four points in the quarter. RMU carried a 14-point lead on the Pioneers going into the the half time break.

The offensive outburst in this game was sparked by the defense. The Colonials out-rebounded their opposition 21-12. This was partly due to the play of Irekipitan Ozzy-Momodu, who was in double-double territory as the teams went into the locker room. Ozzy-Momodu had 10 points accompanied by seven rebounds. Nneka Ezeigbo posted eight points and six rebounds in the first half.

RMU came out of the break on a quick 7-3 run. Haines was kept in check by the Colonials defense. Haines was only able to add two points and a rebound to her total as Sacred Heart’s shooting difficulties continued. The Pioneers shot a measly 18.2 percent from the floor in the third quarter. Robert Morris made 55.6 percent of their shots in the third frame. The interior of Robert Morris would continue to dominate. Ezeigbo and Ozzy-Momodu each finished the quarter with 12 points and nine rebounds. Robert Morris went into the fourth quarter, leading the second best team in the NEC by the score of 48-27.

The Colonials domination continued into the fourth quarter. The Pioneers were in a 21 deficit on the scoreboard and a 12 rebound difference on the glass. Nia Adams came into the fourth quarter with eight points. She found two quick buckets and pushed her total to 12. This is just Adams’s fourth game with double digit scoring this year. Robert Morris held the fifth best scorer in the NEC, Katherine Haines, to just seven points and four rebounds. The final score of this game was 64-46.

This was another historic night for the Colonials. Nneka Ezeigbo finished the night with 16 points and 11 rebounds as she eclipsed the 500 rebound plateau in the game. She is just the 23rd player in program history to reach that mark.

“It’s nothing different,” Ezeigbo explained when asked about her accomplishment, “I’m just here to do what I do, and play for my team.”

Not to be out done, Ozzy-Momodu tallied 14 points and 11 rebounds. This is the first time since March 3, 2014 that a pair of Colonials to double-double in the same game.

The Fairleigh Dickinson Knights (6-13, 3-5) is the next team to try and stop this Colonials team. That game is set for Saturday, February, 2. Start time is set for 2 p.m.