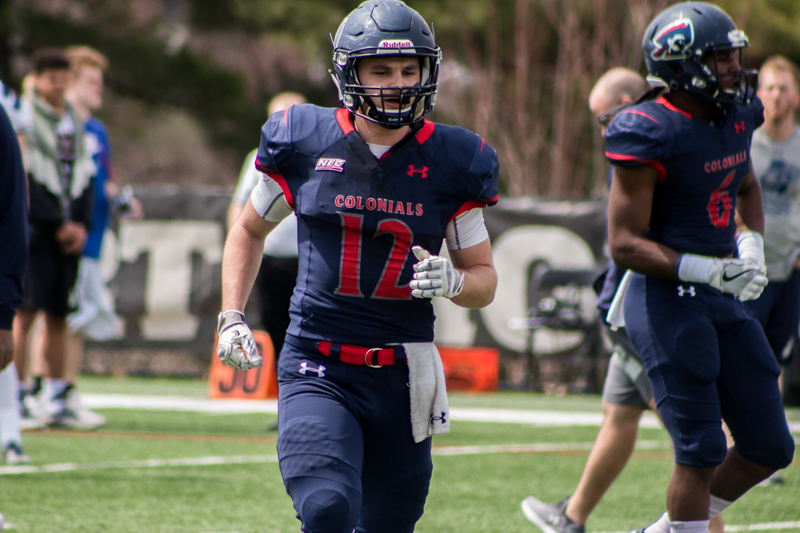 The Blue Devils won the toss and elected to receive. On the first drive of the game, Central Connecticut needed just six plays to get 74 yards. The drive was capitalized by a 23-yard touchdown run from Drew Jean-Guillaume. That 7-0 lead didn’t last long though, as the Colonials tied it up on a two play, 83-yard drive. That drive consisted of two runs, the first one by Terrence Stephans went for 74-yards and was the longest run since 2003. The other run was a touchdown run by Timmy Vechhio that went for the remaining seven yards.

CCSU needed just five plays to go 75 yards and make the score 14-7. The Colonials next drive started off slow as they were forced to punt after just three plays. The punt would be dropped though, and Robert Morris would recover. They would then drive fifty yards to tie the game up at 14-14 on a run by Alijah Jackson.

CCSU’s next drive was capped by a 25-yard run by Drew Jean-Guillaume to make it 21-14. That’d be the last score of the first quarter.

The punt put CCSU at their eight-yard line. CCSU drove down the field and completed the 92-yard touchdown drive on a short pass to Courtney Rush. This made the score 35-21 with just over two minutes left to go in the first half.

Robert Morris went with the two-minute drill to try and cut the lead to a one-possession game right before half. After driving down the field, an amazing catch by Anthony DelleFemine put them at the 25-yard line. Walker was then sacked to put it at the 36-yard line. RMU then called their second timeout, but a weather delay made it a 25-minute delay with just 40 seconds left in the first half.

The teams returned to the field and Robert Morris attempted a long field. The field goal fell short and CCSU knelt to end the first half with the score at 35-21.

Robert Morris drove downfield on their first possession of the second half. Alijah Jackson led the way again, as he ended the drive with a 35-yard rushing touchdown to pull the Colonials within a score at 35-28.

Central Connecticut needed only eight plays on their next drive to go 75-yards to extend their lead to 14 points again. This drive was capitalized by a Courtney Rush eight-yard touchdown run to make the score 42-28.

Robert Morris would answer again though, but it would be for the final time of the night. The Colonials marched down the field and had a third and four situation that resulted in a 19-yard pass to Warren Robinson to put RMU on CCSU’s side of the 50. The Colonials were able to get it to the 31-yard line before CCSU forced a fourth and nine situation. RMU decided to go for it, and Jimmy Walker completed a first down to Timmy Vecchio on a 24-yard hookup. The next play saw Mathew Gonzalez record a seven-yard touchdown reception to pull the teams within a score. Unfortunately for the Colonials though it would be their last score of the night.

The Blue Devils’ next drive saw the team go all the way to the 3-yard line. On the 3-yard line, Darell Mason stripped the ball from quarterback Jacob Dolegala and the Colonials took over at the three-yard line. However, Jimmy Walker ended up getting hurt on the drive and the drive ended with George Martin throwing two incomplete passes.

In their first drive of the fourth quarter, CCSU extended their lead to 49-35 on a Dolegala touchdown run. Robert Morris was able to drive to their forty yard line but opted against going for it on fourth and two. CCSU used their next drive to run off a minute of clock time, before punting the ball back to Robert Morris. That was the first, and only time, that the Blue Devil’s punter took the field.

Robert Morris got the ball down to the 26-yard line before an interception by Tymir Hinton sealed the deal for Central Connecticut. To add insult to injury, CCSU capped this drive off with a 20-yard touchdown pass to cement the score at 56-35.

The final score of the game was 56-35 in favor of the Blue Devils. The Colonials kept is close all game, never trailing by more than 14 till the final minute, but they were never able to gain control of the lead. The defense for Robert Morris gave up exactly 699 yards of offense in the game, which included 358 yards of rushing in the game.

As for the Robert Morris offense, they were able to keep pace with CCSU until the fourth quarter. They managed to put up 219 yards of rushing, with Alijah Jackson having another 100-yard game as he accounted for 130 of the Colonials 219 rushing yards on just 16 carries. Jimmy Walker was 24-36 on the day, with 268 yards of passing and two touchdowns with just one interception.

The Colonials next game will be against Duquesne (3-3, 0-1) next Saturday night at Duquesne. The Dukes fell to Bryant this afternoon by the razor-thin score of 21-20.