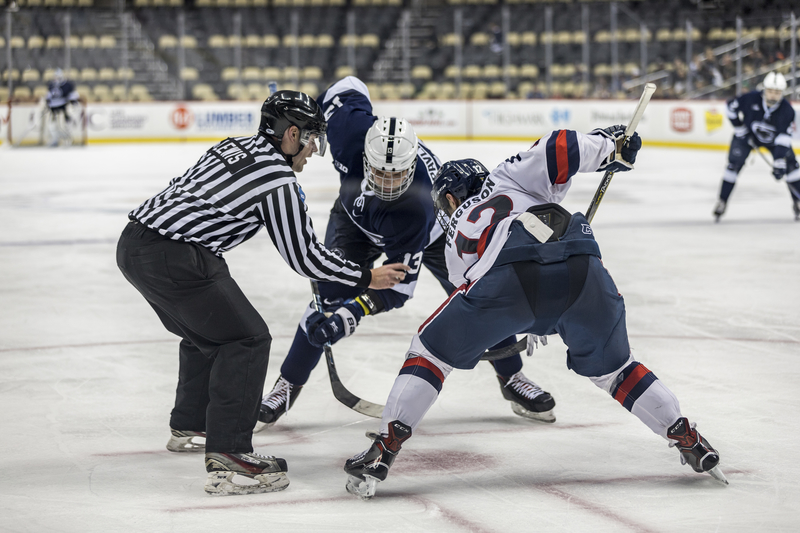 The Robert Morris Colonials men’s hockey team fell to the Penn State Nittany Lions on a chilly December evening by a score of a 5-2. This loss drops the Colonials to 5-10-1 overall (5-7-1 AHC). Even though there was a large crowd in attendance at PPG Paints Arena, this was not enough to power the Colonials past Penn State.

The first half of the first period was filled with electric action at both ends, as both teams were able to gain time in the zone and put shots on net. Penn State had a golden opportunity just before the first media timeout as a Colonials turnover left a PSU player wide open in front of net, but Marotte was there to make a big save to keep the contest scoreless.

Michael Louria broke the tie with a power-play goal just over 13 minutes into the period. The goal was set up by Brady Ferguson and Eric Israel. It was Israel’s shot that was saved, but the rebound popped out to Louria who buried the puck in the back of the net.

After Louria’s goal, the remainder of the period went by without much noticeable action. That was until Louria was sent to the box for two minutes for cross-checking, putting the Nittany Lions on the power play for the second time. RMU was able to hold off the PSU power-play unit and head to the locker room up one, with 30 seconds of the Nittany Lions’ power play carrying over into the second period.

The second period of play began with the Nittany Lions up a man on the power play, but the Colonials successfully killed off the remaining 30 seconds left over from the first. Then, five minutes into the period, Penn State was able to draw even with the Colonials after Nate Sucese tapped home a backdoor pass from Brandon Biro. Shortly after the drawing, even the two teams stepped up the physicality and RMU was given a power play. However, they were unable to convert and even gave up several high-quality short-handed opportunities.

A few minutes later, Penn State increased their lead after Sam Sternschein tipped Alex Limoges’ wrist shot past RMU goalie Francis Marotte. The Colonials then rebounded with several quality opportunities of their own, but they failed to score.

Finally, with a minute and a half left in the second, Penn State tacked on another goal to make the score 3-1. The goal was made by James Gobetz and it was set up by Andrew Sturtz. Sturtz drove hard to the net where Marotte poke-checked the puck off of his stick and onto the tape of Gobetz, who was then able to tickle the twine.

The Nittany Lions then wasted no time increasing their lead again as they were able to score again just 30 seconds into the final period of play. This goal was scored by Denis Smirnov who was able to tap home the puck after it careened of the boards behind the net.

Following the Nittany Lions’ fourth goal, the game became more open and the teams traded chances. Then, with just under eight minutes remaining in the third, the Colonials cut Penn State’s lead in half as Ferguson was able to jam the puck into the back of the net behind Nittany Lion goaltender Peyton Jones.

A few minutes after the Colonials second goal, Penn State earned a power play and was able to create quite a few quality chances. The best of which saw the Nittany Lions ring the puck off the crossbar after missing an open net.

This performance was one in which Coach Schooley was impressed by the Colonials’ strong first period. He mentioned that it may have been one of the team’s best periods all season, and that it was the team’s strongest aspect of the night. Schooley was happy that the team came out and played with energy and emotion.

Luckily for the Colonials, they will have a chance at redemption tomorrow night as the two teams square off again. However, this time RMU will travel to Happy Valley to take on the Nittany Lions at the Pegula Ice Arena. The puck is scheduled to drop at 7 p.m.