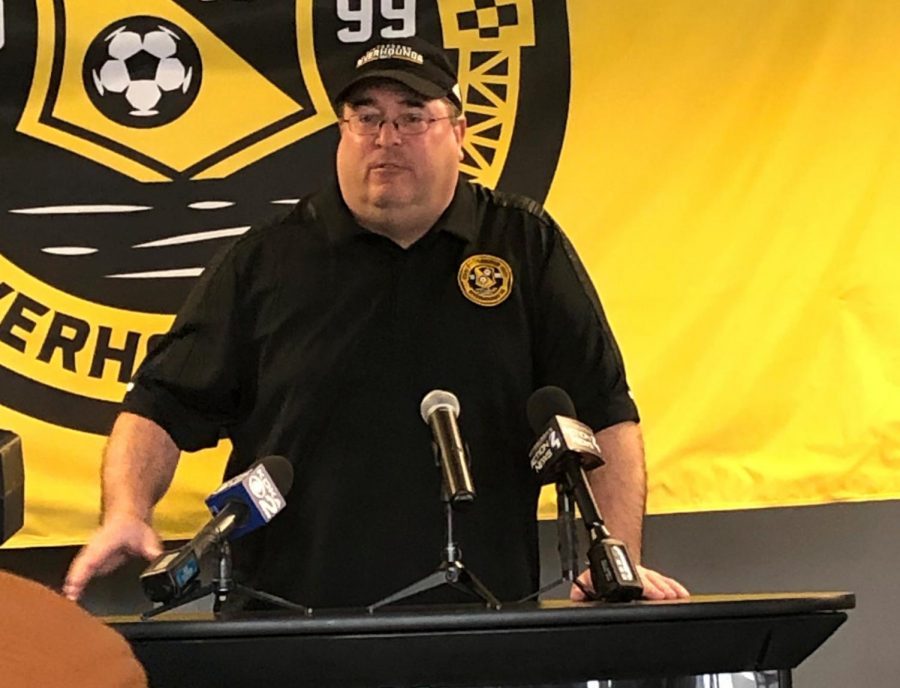 PITTSBURGH — At Highmark Stadium on Friday, Pittsburgh Riverhounds SC announced their plans for their 20th year of soccer in the Steel City. Plans included a new alternate logo and for the team to establish a Hall of Fame.

Kevin Johnston, general manager of the Riverhounds unveiled the logo. The logo was created in collaboration with Brian Gundell, who helped create the new team identity in last year’s rebrand.

Johnston said that, “We will still use our primary logo as our foremost brand identity, but the 20th anniversary logo will be used in conjunction on merchandise and other items.”

However, before the unveiling of the logo, there was a short video featuring the history of the Riverhounds. Former managers John Kowalski; who currently coaches the Robert Morris women’s soccer team, and Gene Klein spoke about how in the early stages of the team, the home pitch was the soccer field at Bethel Park High School.

Johnston then called upon manager Bob Lilley, who spoke about the state of the current squad. Lilley spoke briefly of his history with Pittsburgh, and how he played in the citry in 1994 with the Pittsburgh Stingers of the now defunct Continental Indoor Soccer League. Lilley then went on about the Hall of Fame, saying that some of the players who were to be inducted were “thorns in our side.”

Lilley also mentioned how last year, the staff was able to, “change the culture, and move it more towards where the modern game of soccer is right now, and how fast it’s growing.” Lilley said that the team will have a different mindset and that “We don’t play our seasons to try to make the playoffs, or be somewhere in the middle of the table. We play our seasons now to be the very best; and I think Pittsburgh deserves that.”

Coach Lilley finished his speech by saying, “The last time I was part of a 20th anniversary season, was 2015 in Rochester (with the Rhinos), and we won the championship, and I’m hoping we can make that happen again.”

When Lilley was asked about key off seasons additions to the team, he mentioned four new players, and that they brought a strong core back. Three of the signings played with Lilley with the Rochester Rhinos. Two of those players, Steevan Dos Santos and Christian Volesky, will look to make the Riverhounds stronger in the offensive end.

Dos Santos scored 30 goals in the past four years with Ottawa Fury FC and the Rhinos. Volesky, a 26 year old center-forward, scored 39 goals and 10 assists in the USL with Saint Louis FC and Oklahoma City Energy FC. The other former Rhino that the Riverhounds signed was 24-year-old right back Ryan James, who Lilley said was an “experienced player who can play anywhere in the back or in the midfield.”

The Hounds are about to start their preseason schedule. Coach Lilley added, “We have a lot of talent right now, and frankly, we may have two players battling it out for one position on the roster.” He also didn’t rule out adding more players from MLS practice squads or overseas.

Next up to talk was the Director of Operations, John Rotz. Rotz mainly spoke about the team Hall of Fame, and how “as an organization, we should recognize those individuals throughout our history, and their contributions to the game of soccer.” Ratz further went on to discuss that “the inaugural class will be announced prior to the season, and will be voted on by media, club legends and club officials.”

There were two players who were at the press conference, Jamaican midfielder Kenardo Forbes, and English midfielder Kevin Kerr; whose seven years with the Riverhounds is the most of anyone on the current roster. Forbes said that a winning culture was “hard to create” but added that it helps in the locker room. Both Forbes and Kerr said that Coach Lilley created and set a certain standard, with Kerr adding that “it took him (Lilley) about three passes this year before he took us in and gave us a major lecture… we need to turn up every day and meet the challenge.”

The Riverhounds will unveil a memorial at Highmark Stadium, but the specific location in the stadium is unknown as of this point, and the class will be inducted on Friday, July 12. For the game the following day against the Tampa Bay Rowdies, there will be a legends game prior to the 7:00 p.m. kick-off.