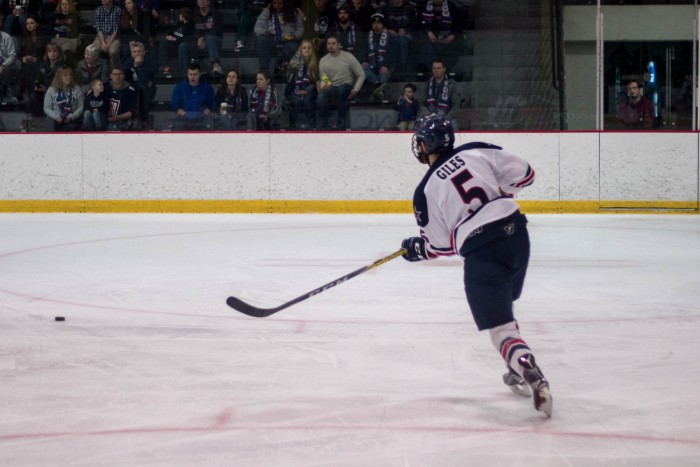 PITTSBURGH– Even though the Robert Morris University men’s hockey team (9-12-3, 9-8-3 AHC) had seven powerplay opportunities, the Colonials failed to make any serious noise as they fell to American International College (13-11-1, 13-5-1 AHC), 4-1.

The Colonials looked to avenge Friday night’s loss in which they mounted a comeback but fell short, losing 4-3 to AIC.

The opening period picked right up where Friday’s matchup left off, with AIC flying around the ice and quickly notching the first goal as AIC’s Jeff Baum sent a shot from the point that made its way through a handful of bodies to beat RMU goaltender, Justin Kapelmaster.

As the first frame came to a close, there was no shortage of heavy-hitting in what felt like a playoff-type game as Kip Hoffman stepped up on a Yellow Jacket in the neutral zone laying the boom.

Nearing the midway mark of the second period, the Colonials finally found their way onto the scoreboard as Alex Robert’s point-shot was redirected off of the foot of RMU’s Darcy Walsh to tie the game up at one apiece.

RMU then received two chances on the powerplay to take the lead, however, they failed to capitalize on their first opportunity, and Sean Giles would then take a cross-checking penalty shortly after to dismiss a Yellow Jacket interference penalty.

As the game progressed into the final frame, the Yellow Jackets took advantage of a Luke Lynch’s tripping penalty as Yellow Jacket, Martin Mellberg, made no mistake with his shot beating Kapelmaster glove side to make it 2-1.

AIC then added their second consecutive powerplay goal as Austin Albrecht received a cross-crease pass as he buried it into a yawning cage.

“Our penalty kill, which has been outstanding, has let us down again,” said head coach Derek Schooley.

As the game wound down, the Colonials had a golden opportunity as Brennan Kapcheck received a major and game misconduct for contact to the head.

During the five minute major, the Colonials had five shots but could not beat AIC’s Stefano Durante as he stood tall for the Yellow Jackets throughout the contest with a total 36 saves.

In this weekend’s play overall, the Colonials struggled to find any powerplay success. As for AIC, they dominated in that category, netting five goals of the man-advantage in the series.

“Five on five we outscored them this weekend but unfortunately it’s all facets of the game and they were far superior on their special teams then we were this weekend.”

The Colonials also outshot the Yellow Jackets 37 to 26 but could not execute on their opportunities.

“We put a lot of pucks to net but it’s not good enough and we need to finish,” Schooley said. “When you get that many chances you need to finish around the net.”

RMU will look to bounce back next week against a tough nonconference opponent in 13th ranked Arizona State (15-9-3) via USCHO.com polls in Tempe, Arizona. Puck drops at 10:05 p.m. on January 31.