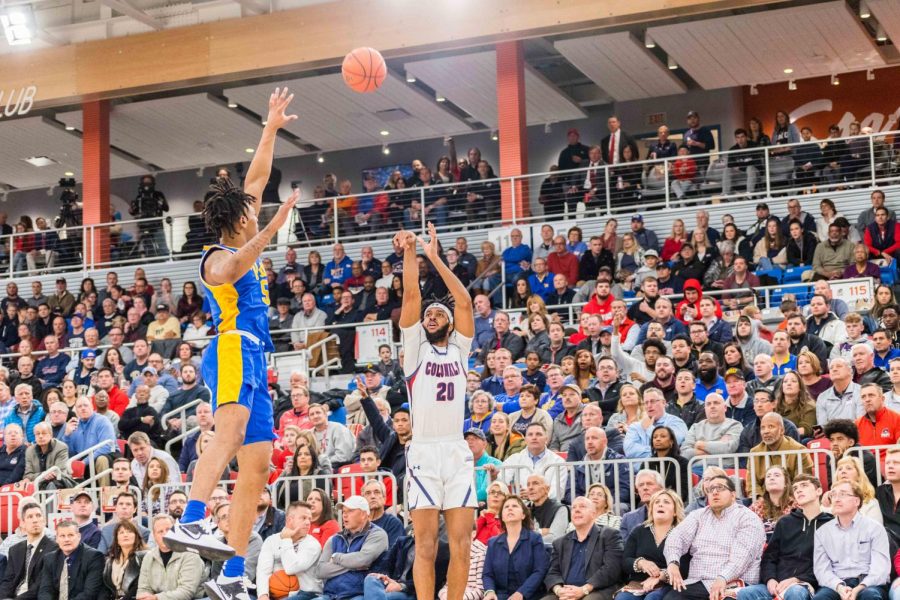 MOON TOWNSHIP– With their non-conference slate nearing its end, the Robert Morris men’s basketball team (3-8) faces a formidable opponent in Central Michigan (7-4) on Tuesday at the UPMC Events Center.
Recapping the Colonials
Robert Morris has not had an ideal start to the 2019-2020 season, posting a 3-8 record through the first month of their schedule. Though the team’s record is unimpressive, their non-conference schedule has featured some big names that will certainly help the Colonials grow and develop as a team in the long run, such as Notre Dame (8-3, 0-2 ACC), Pitt (7-3, 1-1 ACC) and Marquette (7-2).

The Colonials notched their third win of the season the last time they hit the hardwood, edging out Florida Gulf Coast University (2-10) 64-59. That win gives the team some momentum as they head back home to RMU for Tuesday’s contest.

Josh Williams had a big night for the Colonials in this game, scoring 16 points while shooting 3-4 from three-point range. Aside from the big performance from Williams, A.J. Bramah and Jalen Hawkins scored 12 points each off of the bench. The pair also pulled down a combined 13 rebounds in the game, showing that they could get it done on the boards as well.

The Robert Morris defense pressured FGCU into a poor shooting performance in the first half, as the Eagles shot an abysmal 12.5% from three through the first 20 minutes.

This game seemed to show glimpses of what RMU is capable of, now, they will try to piece everything together and pick up a huge win over a very talented Central Michigan team. How do the Chippewas compare? Let’s take a look.
Scouting Central Michigan
The Chippewas are currently on a two-game losing streak, losing their last game against the Big-12’s Texas Longhorns (9-1). Prior to this loss, CMU had won three of its last five games, including two double-digit wins.

In the game against Texas, Kevin McKay led the way with 21 points on a 7-7 shooting performance. McKay also sank 7-9 free throws, making the most of his opportunities.

David DeLeo and Dallas Morgan were close behind McKay, tallying 15 and 14 points, respectively. While McKay worked on the Longhorns on the inside, this pair let the threes fly, shooting a combined 7-19 from downtown.

Although the offense shot over 45% in the contest, the Chippewas’ defense couldn’t slow down a tenacious Texas offense, who shot over 50% from both the field and from beyond the arc. Four players reached double-digit scoring for Texas and nine players scored in total.

Despite this poor defensive performance, CMU is averaging a higher field goal percentage and more points per game than their opponents this season. Coming off of a game against arguably their toughest opponent to date, the Chippewas look to make a statement against Robert Morris and get back to their winning ways.
Players to Watch
Josh Williams (RMU)

Williams is coming off of one of his best games of the season. The Akron native has had some iffy shooting performances this season, but I believe that he will put it all together on Tuesday and hit the big shots when called upon.

Mendy has failed to crack 10 points in each of RMU’s last three games, while also scoring just 19 points in total over that stretch. The senior is a constant threat on the boards and around the rim during offensive possessions. Expect him to get back into the mix on offense while also pulling down some key boards.

McKay averages 16.2 points per game and is coming off of his second-highest scoring performance of the season. His shooting percentage is also over 65%, which shows that the guard can not only find ways to score, but he can do it effectively as well.

Morgan is another constant scoring threat for a very talented CMU team. The senior has eight games with double-digit points and I expect him to make it nine against Robert Morris on Tuesday.
Prediction
Robert Morris and Central Michigan will battle in a tightly contested game in the first half. As the second half goes on, however, I expect Robert Morris to get into some foul trouble and slow down on defense as a result. This will lead Central Michigan to a convincing win.