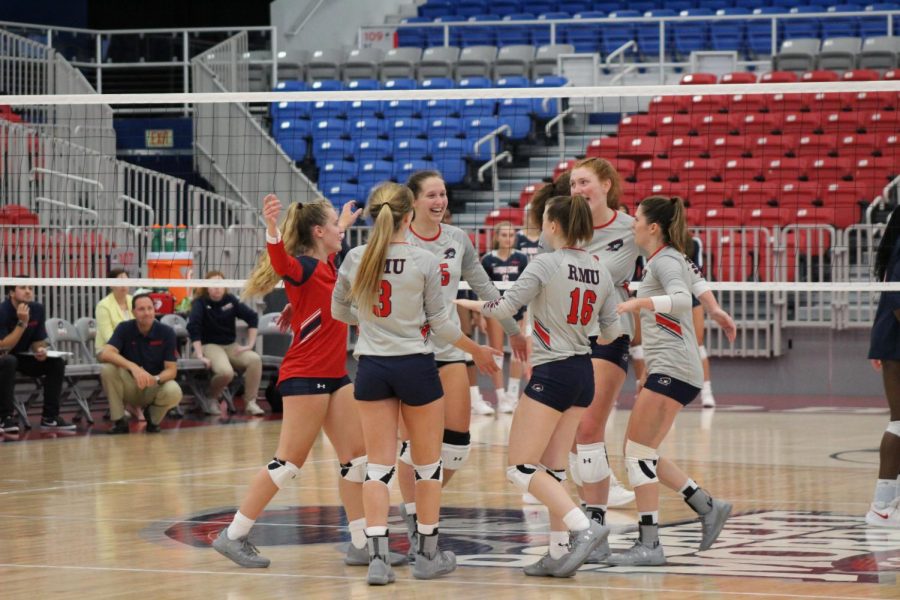 MOON TOWNSHIP — After a dominating 3-0 win over Merrimack (1-9, 0-3 NEC) to open NEC play at the UPMC Events Center, the Robert Morris volleyball team (11-3, 1-0 NEC) looks to continue their hot start on the road against the Bryant Bulldogs (8-11, 3-0 NEC). The two teams will take the court Friday night at 6 p.m. in a battle to stay unbeaten in conference play.

Robert Morris enters the weekend with momentum building back up again after bouncing back from three straight losses at the YSU Red and White Invitational. Playing in only their second NEC game, the Colonials will be tested against a good Bulldogs team. The RMU offense has been quick and effective all season and that needs to continue if the Colonials are to improve to 2-0 in the NEC. Carrying a 2-1 road record, the team will look to build their resumé with a big early conference win.

The Bulldogs have been an up and down team to begin the 2019 season. Bryant started off losing their first four games, winning five of six, losing six in a row, and enter this game on a three-game winning streak. The difference has been the start of conference matches, with the three wins in NEC play over Fairleigh Dickinson (1-15, 0-2 NEC), St. Francis Brooklyn (5-10, 0-2 NEC), and Merrimack. If Bryant is going to win this important early conference game, their young talent will need to show up and play well at home.

Sophomore libero Nikolette Zangolli has stepped up and taken control of the back row for the Colonials this season. She has recorded 264 digs and also 26 assists on Colonial kills. Zangolli will play a key role in RMU’s success the whole year and will be a player to watch on the road vs. Bryant.

RMU’s best and most dominant hitter, Granger continues to be the go-to option for the Colonials any time she is on the court. The junior leads the team in kills (147), aces (29), and total blocks (75). If the Colonials are to pull off a win in their first NEC road game, look for Granger to once again be an important factor in the team’s offense.

Only a freshman, James has been a great surprise for this very young Bryant team. The 5’10’’ outside hitter leads the Bulldogs with 157 kills and 24 aces, proving to be a great weapon wherever she may be on the court. Her youth has been a downside at times, also leading the team with 87 total errors, but will be one of Bryant’s most impactful players Friday night.

McGovern, a fellow freshman outside, has also been a key player for the Bulldogs early on. Her 114 kills and 2.15 kills per set are both third on the team. She has struggled at times, recording the same number of service errors as aces (13) and a total of 77 errors, but when McGovern is on her game, she is hard to stop.

NEC play continues to be kind to the Colonials and the team exits Smithfield, Rhode Island, with a win. Emma Granger will lead RMU in kills once again and deliver the Bulldogs their first loss in the NEC this season.