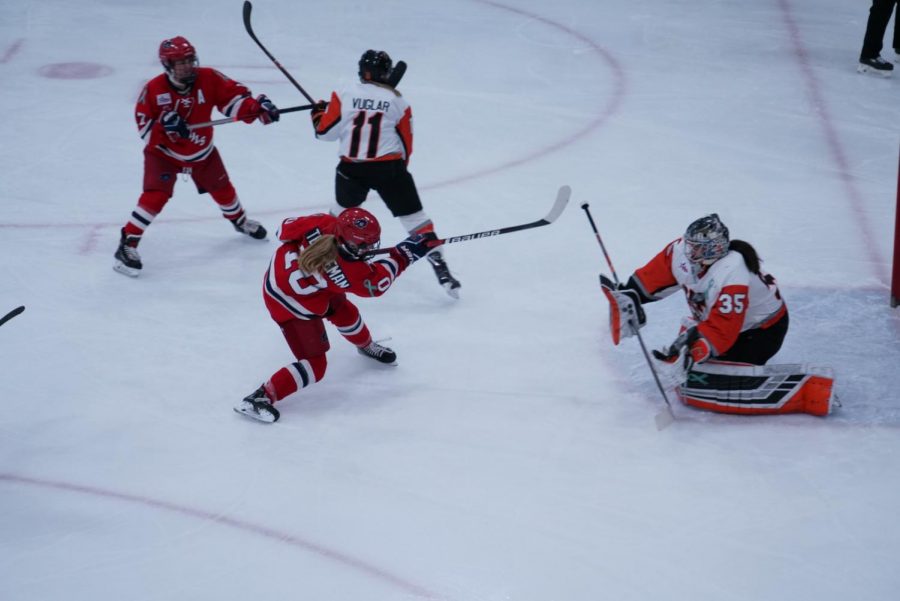 MOON TOWNSHIP — The RMU Women’s hockey team (12-12-6, 10-3-3 CHA) will look to widen their CHA lead with a pivotal two-game set against Mercyhurst (12-12-5, 9-5-2 CHA). With a series sweep or a win and a tie, plus a Lindenwood (7-18-3, 3-11-2 CHA) tie over Syracuse (8-19-3, 8-6-2 CHA), the Colonials can clinch a first-round bye as well the CHA for the third year in a row. They currently sit three points ahead of Mercyhurst and five ahead of Syracuse in the standings.
Recapping RMU
RMU comes back home after concluding their road games this season after a two-game set at Lindenwood and was stunned in both games by the lowly Lions.

In game one, they battled to a 2-2 tie, with Amber Rennie and Lexi Templeman each picking up two points.

In game two, the Lions trounced the Colonials 6-1, with Sarah Lecavalier picking up the lone Colonials goal, her first of the season. Templeman added another assist to lead the Colonials with three points on the weekend. They will look to rebound against Mercyhurst.
Scouting Mercyhurst
The Lakers come into town looking to gain control of the CHA. They are on a four-game winless streak dating back to February 2nd. Last weekend, they tied Penn State in both games. In game one, they tied 1-1. Maggie Knott scored the only goal. In game two, it was 2-2, with Summer-Rae Dobson leading the way with an assist. They will look to halt their winless streak this weekend.
Players to watch
Amber Rennie (RMU): After picking up a goal and an assist last weekend, Rennie looks to continue to put up points this season. She is third on the team in points with 23 and leads the Colonials with six power-play goals on the campaign.

Lexi Templeman (RMU): Templeman’s sophomore season has been impressive. She continues to dish the puck really well, as she has 23 assists on the year to only four goals. She picked up three points last weekend and look for her to continue it this weekend.

Summer-Rae Dobson (MH): Dobson had two points against the Nittany Lions last weekend and currently sits third on the Lakers’ roster, two points behind Knott for second. She also excels on special teams, as evidenced by her three power-play goals this season.

Emma Nuutinen (MH): The junior from Vantaa, Finland is the most intriguing name on the Lakers’ roster. While she was left off the scoresheet against Penn State, Nuutinen has 25 points (14 goals, 11 assists) on the season, best on the roster. She also leads the team with 94 shots.
Prediction
RMU wins the first game 3-2 and the teams will tie the second game 1-1, paving the way for a Colonials clinch.