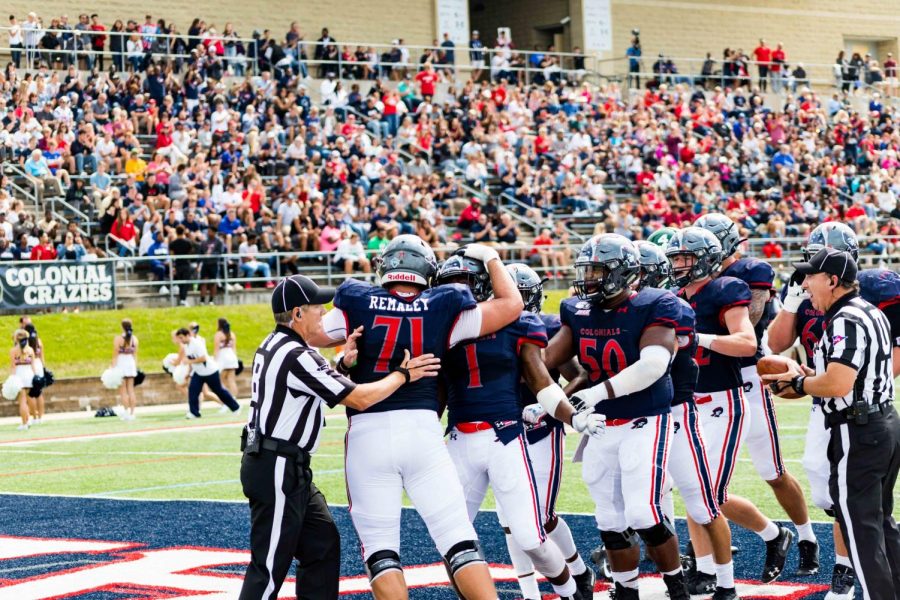 MOON TOWNSHIP– For the first time since 2011, the Robert Morris University football team (3-4, 2-0 NEC) has begun conference play with a 2-0 record. With Bryant (2-6, 1-2 NEC) on the horizon, the Bulldogs deliver the potential for a third straight NEC victory. Bryant enters Joe Walton Stadium after a blowout loss at the hands of Central Connecticut (6-1, 2-0 NEC), losing 52-14. The two teams will collide with the Colonials looking to bring their record to .500, and Bryant to improve upon an uninspiring performance last weekend.
Recapping RMU
Robert Morris begins their third week of NEC competition after defeating the struggling Wagner Seahawks (1-6, 1-1 NEC) on the road 21-13. The Colonials were down early after a Christian Alexander-Stevens touchdown pass to Nolan Quinlan from five yards out. RMU bounced back not too long after, getting on the board thanks to a 23-yard pass from Caleb Lewis to Tim Vecchio. After a Wagner 22-yard field goal by Eric Silvester late in the second quarter, Robert Morris took control in the second half.

The play of the game was made by freshman Tiheem Crocker, who blocked a punt early in the third quarter. Sophomore defensive back DeJuan Dandrige picked up the loose ball for a 25-yard scoop and score to give the Colonials a 14-10 lead. Senior running back Terence Stephens, Jr. added on in the fourth on a one-yard touchdown run to increase the lead to 11. The Seahawks added a field goal but RMU completed the victory with a 21-13 score.

The Colonials will look take their success from playing on the road this season back to Joe Walton, having yet to win a home game there. The team carries an impressive 3-2 road record, but with four of the last five games of the season at home, RMU has the chance to do some damage in a fairly competitive Northeast Conference.
Scouting the Bulldogs
Bryant will be looking to bounce back after being embarrassed by Central Connecticut. The Blue Devils jumped out to a 21-0 lead before the Bulldogs were able to get on the board with a long 15-play, 95-yard drive capped by sophomore Harrison Easton’s first career touchdown on a carry three-yard from the goal line. Two plays later, Central Connecticut answered back and continue to pile on into the second half.

The Bulldogs were outworked and outmatched in their last NEC game and will strive to improve upon their lack of defensive stops. Bryant has not been one to give other teams fits, but they were on a two-game winning streak before the Blue Devils game. They beat Merrimack (3-4) on the road and LIU (0-6, 0-5 NEC) at home before taking the loss. If the Bulldogs hope to win three out of four, they must establish the run and control time of possession.
Players to Watch
Caleb Lewis (Robert Morris, QB)

Lewis has led the Colonials to back to back wins with his improved play and all three wins RMU has recorded. It is still unclear whether Lewis or redshirt sophomore George Martin will start, but expect Lewis to lead the Colonials on multiple scoring drives if RMU is to improve to 3-0 in the NEC.

The Colonials leader in team sacks with three, Harris has also recorded 12 tackles and one forced fumble. Look for this senior to lead the Robert Morris pass rush all afternoon.

Curtis, a redshirt sophomore, has been mostly a game manager this season for the Bulldogs. In seven games, he has recorded only seven total touchdowns, six passing and one rushing. He will be an important factor if Bryant wants to have any success on Saturday.

Wright has been a dominant force for Bryant all season long. The senior leads the team in sacks (six), forced fumbles (four) and tackles for loss (12). He will anchor the Bulldogs defensive pressure all game.
Prediction
The Colonials are off to a hot start in conference play and I believe that their success will continue. Robert Morris will finally find success at home this season and pull out a close victory over a Bryant team the Colonials will prove they are better than by games end.