Preview: Colonials look to get back into win column against Bentley 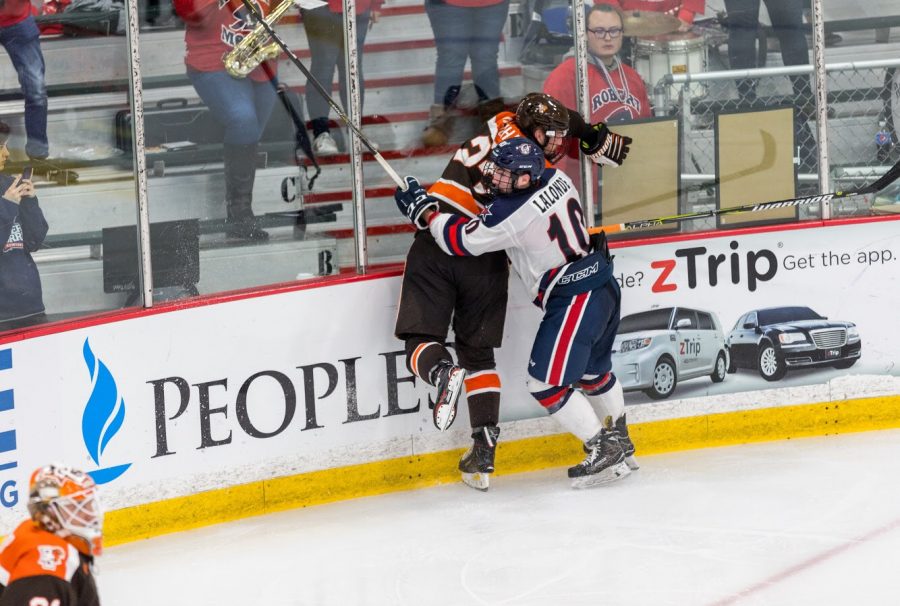 PITTSBURGH- After finishing fourth in the Three Rivers Classic, the Robert Morris men’s hockey team (8-11-1, 7-6-1) looks to get back in the win column. They will face off at home against the Bentley Falcons (5-11-2, 4-7-1) in an American Hockey Association match-up.

Last year, the Colonials were 1-2-1 on the season against the Falcons, the only win being a 3-2 win at Colonials Arena. Timmy Moore, Alex Tonge and Michael Zuffante scored to give the Colonials the edge.

In last week’s Three Rivers Classic, the Colonials finished in fourth place out of four teams. In the first game of the tournament, they played the eventual tournament winners, Brown University (5-7-3, 2-4-3 ECAC). In the game, the Colonials lost to the Bears by a score of 7-4. Eric Israel scored once, while Grant Hebert scored a hat-trick for the Colonials.

In the second game, the Colonials faced perhaps the toughest team they will play all year, the No. 1 ranked St. Cloud State Huskies (14-2-2, 6-0-2 NCHC). Robert Morris put up a fight in this one, losing 5-2 to the Huskies. Nick Lalonde and Nick Prkusic scored, while Francis Marotte made 30 saves in net for the Colonials.

The Robert Morris penalty kill is still one of the top in the NCAA, as the team is operating at a .838 kill percentage, 17th in the NCAA. In the Three Rivers Classic, the Colonials were .750 on the kill.

The Falcons are coming off a 3-3 tie against the Dartmouth Big Green (5-7-2, 4-2-1 ECAC), in which Drew Callin scored once and Jonathan Desbiens scored twice, including the game-tying goal with only 19 seconds left in regulation. However, Bentley hasn’t won since November 24, a 4-2 win in Worcester, Massachusetts over Holy Cross (3-12-1, 3-8-1 AHA). In that one, Michael Zuffante, Ryner Gorowsky, Alexey Solovyev and Luke Orysiuk each scored for the Falcons.

Grant Hebert (RMU): Although the freshman got off to a slow start this year, Hebert has turned it around in recent weeks, including the aforementioned hat trick in the Three Rivers Classic against Brown. The St. Andrews West, Ontario native has nine points (5g, 3a) in 15 games for the Colonials.

Sean Giles (RMU): While Giles may not show up on the scoresheet that often, only three points (0g, 3a) on the season, the junior has proven to be a valuable asset on the Colonials penalty kill. The solid defenseman has 24 blocked shots and a physical presence in front of the net.

Luke Santerno (Bentley)- As the leading scorer for the Falcons with 17 points (4g, 13a), Santerno can feed his teammates with regularity. His 13 assists tied for 35th in the NCAA. The freshman from Smithers, British Columbia also stands at 6’3”, so he isn’t afraid to get deep and work the puck.

Jakov Novak (Bentley): A seventh-round pick by the Ottawa Senators last year, Novak, just like Grant Hebert for the Colonials, hasn’t gotten off to the best start this year with only five points (2g, 3a). However, similar to Luke Santerno, he is also a large player, with the Riverside, Ontario native standing at 6’3” and weighing 201, Novak is a big object to try to move around on the ice.

The Colonials will add to the winless streak for the Falcons, winning both games this weekend. Francis Marotte will get a shutout in the first game, winning 2-0, while in the second, Grant Hebert continues his scoring ways, with a goal and an assist in a 3-2 overtime win.