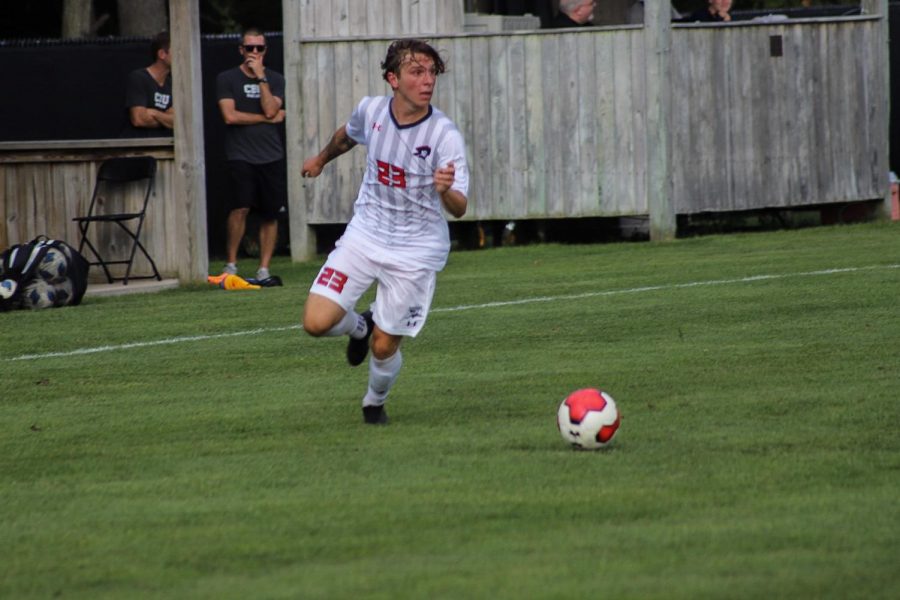 MOON TOWNSHIP– The Robert Morris men’s soccer team (3-7-2, 2-1-1 NEC) looks to maintain its conference lead when the Bryant University Bulldogs (5-3, 2-0 NEC) visit the North Athletic Complex. The match is set for 3:30 p.m. on Friday afternoon as the Colonials look to improve their 2-4-2 home record.
Recapping RMU
The Colonials currently sit atop of the Northeast Conference with seven conference points as they edge out Bryant by one point. Robert Morris comes back home after traveling to Central Connecticut State (0-8-1, 0-3 NEC) to take on the Blue Devils. The outcome was in the Colonials favor, as they took the match by a final score of 3-1. Riccardo Rota led the Colonials with two goals on five total shots, which led the team. Michael Petitti netted the other goal for Robert Morris, along with an assist in 52 minutes of playing time off of the bench. The victory for the Colonials over the Blue Devils capped off a two-game NEC road trip. In the prior game, the Colonials fell to Merrimack (4-3-2, 2-0 NEC) 6-0 in a rough game.
Previewing Bryant
Coming into Moon Township, the Bryant Bulldogs are riding a four-game win streak. The most recent victory for the Bulldogs came against the Colonials’ last opponent, the Central Connecticut Blue Devils. The Bulldogs took that game by a decisive score of 4-0. Ben Williams opened the scoring for the Bulldogs just over the 35th-minute. Jake Spaulding assisted on the opening goal, but later went on to net the Bulldogs’ third tally. Victor Rey and Anthony Barreira scored the other goals for Bryant. Bryant’s keeper, Olivier Larente, faced only one shot against the Blue Devils en route to his second straight shutout. Larente saved all six shots he faced in Bryant’s win over conference opponent Sacred Heart (1-8-1, 0-2-1 NEC) 2-0 on September 29.
Players to Watch
Christian Coridon (RMU)

Coming into arguably the toughest conference game for the Colonials, they will need to rely on experience and playmakers as Coridon fits perfectly into that category. Coridon has appeared in all 12 games for the Colonials while starting seven. His team-leading 22 shots on goal will be something to pay attention to, as that will increase as he will continue to put the ball on the net, giving the Colonials chances versus the Bulldogs. He will also look to improve on his three points on the season, so look for Coridon to play with hunger and passion.

The Colonials’ freshman goalkeeper will be an important factor down the stretch in conference play. He had a pivotal bounce-back win against the Blue Devils after an abysmal start against Merrimack where he allowed five goals before being replaced. Against CCSU, he made four saves while only allowing one goal. He has shown flashes of brilliance throughout this season with two shutouts. As the Colonials look to win against Bryant, they will need Zolnierczyk to play outstanding.

Leading one of the most productive offenses in the NEC, Ben Williams will be a potent force for the Bulldogs on Friday. Williams leads Bryant and is second in the NEC totaling 12 points on five goals and two assists. He comes into the match against RMU with a two-game goal streak. He will be a threat on the field and will look to lead Bryant to victory.

Another player who has playmaking potential on the Bulldogs’ offense is Alex DaCosta. The senior has five assists, which leads the team. However, DaCosta has failed to register any points in the last two games. The dynamic duo of Williams and DaCosta will be difficult to defend against as DaCosta will look to set up Williams throughout the match. DaCosta will be motivated to get back into the point column against the Colonials.
Prediction
As the Colonials seek to stay atop the NEC, they will need to play a strong overall game in all aspects on the pitch. However, Bryant has the ability to control the game against any opponent with their dominant offensive dynamic duo and the goalkeeping of Larente. Also, historically, Bryant has had RMU’s number. The Colonials are 0-7-4 against Bryant all-time, including a 2-0 loss last year in Smithfield, R.I. The Bulldogs will continue their dominant success over the Colonials with a 3-1 win this Friday at the North Athletic Complex.