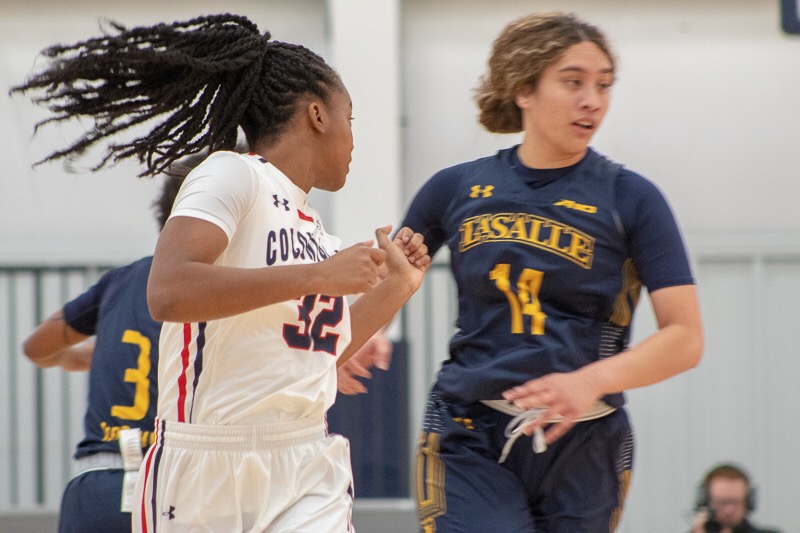 MOON TOWNSHIP— The Robert Morris women’s basketball team (4-8, 1-0 NEC) look to get back on track this season as they continue NEC play on Monday with a match-up against the Fairleigh Dickinson Knights (3-9, 0-1 NEC) who have a near identical record to RMU. Before these two teams square off in a key conference tilt, let’s take a look at some of each team’s last few games and who is hot for each squad.

Robert Morris, though having a rough go of it on the non-conference side of things, got off to a winning start in NEC action as they came away with a 70-58 victory Saturday afternoon in the conference opener against the Mount St. Mary’s Mountaineers at the North Athletic Complex. Ire Ozzy-Momodu led the Colonials with 17 points and Isabella Posset followed close behind with 13 points to put the Colonials firmly in front for the victory. In addition, RMU went 6-for-11 from the line in the first half – making over 50% of their free throws – and then stepped it up in the second half, going 9-for-11. They also had 22 points in the paint in the win.

Fairleigh Dickinson comes into Monday’s contest with a nearly identical record as RMU, but they fell in their opening conference match-up to the Saint Francis Red Flash on Saturday evening in Loretto, losing 75-64. Rachael Niles and Madison Stanley led the Knights with 12 and 11 points for FDU respectively, but the Knights struggled from long range making 50% of their three-pointers only in the last quarter of the second half, before which the Knights’ three-point percentage was below that mark for the rest of the game. However, one bright spot for the Knights was their near perfection from the free throw line and Lauren Francillon’s aggressiveness on offense as she snagged 12 rebounds in the loss.

Nneka Ezeigbo (RMU): Ezeigbo, having played just 12 games so far this season has already amassed a whopping 112 points over this span. Ezeigbo just cannot be stopped and is amazing every time she steps on the court, notching 9.3 points per game as a true powerhouse on offense for the Colonials.

M’Bikata Peniel (FDU): If you thought Ezeigbo’s stats were off the charts, then Peniel’s are simply through the roof. She leads FDU in points, as she has 129 points in 12 games and good for an average of 10.8 points per game in non-conference action alone. Peniel is a proven offensive scorer from anywhere on the court and has made an impact with her offensive prowess and awareness. If she starts to heat up at all during Monday night’s tilt, the Colonials are going to have to rely on a full team effort to overcome her shooting touch as they cannot rely solely on Ezeigbo to carry them to a win.

Predictions: I feel that this is the point in the season where things start to shift for RMU. After one of the worst starts in the last few seasons, RMU has the players and the skill set to start canning buckets from long range, and in the paint, as NEC play picks up. There is a reason why the Colonials were picked first in the preseason coaches’ poll and, despite the daunting task of guarding FDU’s M’BIkata Peniel, the Colonials have a perfect opportunity to pounce on an overall weak Knights team. I say the Colonials go 2-0 in the NEC after a 60-54 win to get fully back on track.