Preview: Colonials look to remain undefeated against no. 2 Gophers 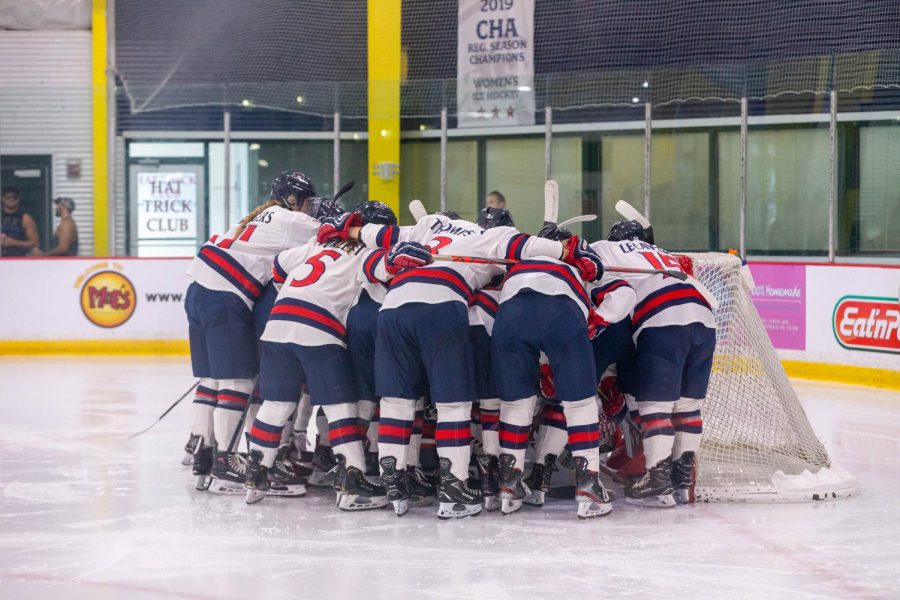 MOON TOWNSHIP– The Robert Morris women’s hockey team (2-0) will look to continue their hot start to the season in a big way this weekend, but it will be a big task that lies ahead of them if they hope to keep their record unblemished. The Colonials will welcome in the no. 2 team in the country in the University of Minnesota Golden Lady Gophers (4-0, 2-0 WCHA) for a two-game homestead Friday and Saturday at Colonials Arena. Before this titanic matchup, let’s take a look at who is hot for each side and what will be key for RMU if they want to pull off a major upset victory.
Recapping Robert Morris
The Colonials opened up their season last weekend with a firm, impactful series sweep of Union (0-4), winning both their matchups in convincing fashion, 6-1 and 5-0 respectively. Jaycee Gebhard scored a hat-trick and Mackenzie Krasowski scored twice over the course of both games. On top of the offensive production, Raygan Kirk and Arielle DeSmet played outstanding in goal as RMU established a blistering warning to its potential CHA opponents: this is not the same team as last year, and if you make costly mistakes against them, they will make you pay.
Previewing Minnesota
The Golden Lady Gophers have come flying out of the gate and have made their presence known just on the scoreboard alone, going an astounding 4-0 overall and 2-0 in conference play. To open Western Collegiate Hockey Association play, the Gophers took down their in-state arch-rivals in Minnesota State (2-2, 0-2 WCHA) on the road in Mankato by convincing finals similar to that of RMU’s season-opening contests, 6-0 and 7-1. Taylor Heise scored three times over the course of the weekend and the Gophers put the WCHA and others on notice with an imposing message: they are intending to challenge for an NCAA title this year, number eight for them and their first since 2016, and hardly anyone will be able to stop their potent offensive roster.
Players to Watch
Lexi Templeman and Jaycee Gebhard (RMU)

There haven’t been two more juggernaut players that have staked their claims in the early start to the college hockey season more than the Colonials’ Jaycee Gebhard and Lexi Templeman. Templeman has a goal and 6 assists for seven points in just two games, while Gebhard has continued on her roll from last year, notching three goals and four assists for the same total over the same amount of games. If the Gophers make costly mistakes early and aren’t able to control either scorer, they’re going to be in for a world of trouble despite their high ranking.

Like Templeman and Gebhard, Heise and Zumwinkle have provided the majority of offense over the opening games of the season. They have been absolute monsters on the ice, putting up 10 and seven points respectively, and blistering opposing netminders with Heise sending 22 shots on net and Zumwinkle blasting 16. If the Colonials let these two hot-shots find open space quickly to start the game, there will be very little chance that they will be able to stop them.
Prediction
I feel that even as hot as Templeman and Gebhard have been for RMU, it will not be enough for them to upset Minnesota and the no. 2 Golden Lady Gophers will sting the Colonials with a sweep this weekend, 4-1 in game one, and 5-0 in game two.