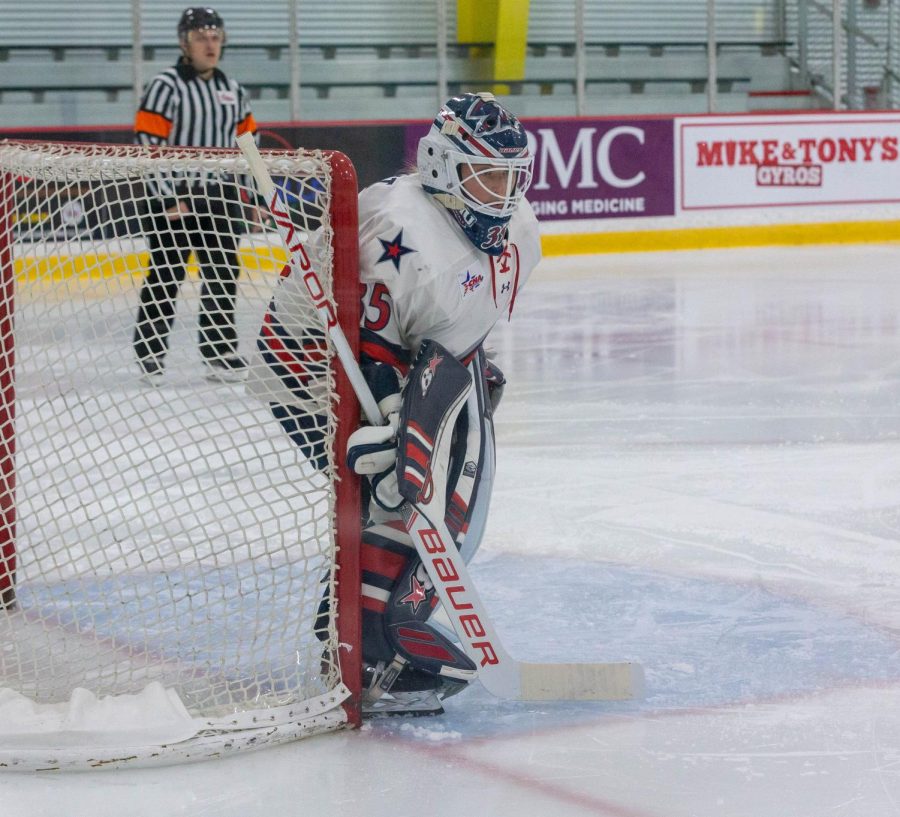 MOON TOWNSHIP– The RMU women’s hockey team will look to kick off another successful season, as they welcome the Union College Dutchmen to Neville Island for a two-game series. The Colonials are coming off of a 5-4 loss to Concordia in an exhibition game at the Island Sports Complex. As for the Dutchmen, they tied the Brock University Badgers, 1-1, at the end of overtime in their lone exhibition game.

Both games will take place at Colonials Arena on Neville Island. Puck drop for Friday’s game will be at 7:05 p.m. and Saturday’s will be at 3:05 p.m.

The Dutchmen travel from New York, belonging to the Eastern College Athletic Conference (ECAC), and the Colonials hailing from College Hockey America (CHA). This non-conference matchup still has its importance, as both teams will seek a strong opening weekend to start off their seasons.
Recapping RMU
The Colonials enter Friday after taking on the Concordia Stingers in their only exhibition game this season. Even though the Colonials dropped the game 5-4, there were several positives to take away from the game. Their top players from last season once again were in the spotlight. Jaycee Gebhard recorded a goal and an assist. Gebhard finished at the top of the CHA in scoring last season with 19 goals, 32 assists and 51 points. Also, Lexi Templeman scored as she finished second in points to Gebhard last season with 32 points. The other two tallies came from Michaela Boyle, a transfer from Clarkson, and Marah Wagner, a freshman, who both were playing in their first unofficial game for the Colonials.

Entering the regular season there is one question mark regarding this team and that is their starting goaltender. Molly Singewald, Arielle DeSmet and Raygan Kirk all had their fair share of time in the net as each played a period against the Stingers. One of these goalies will look to earn the starting goalie honors throughout the season as they look to replace Lauren Bailey, who played in 29 games throughout her senior campaign last year.

The RMU Colonials finished last season with a record of 13-4-3 in the CHA and with an overall record of 16-14-6. They ended last year’s campaign with a heartbreaking loss to the Syracuse Orange in the CHA championship game 6-2. As they start their season off at home, they look to build off of their 10 wins at home last year.
Scouting Union
The Dutchmen come off of last season with a meager overall record of 4-28-2, with an ECAC record of 2-19-1. Union failed to qualify for the ECAC tournament, finishing at the bottom of the conference.

In Union’s exhibition game against the Badgers, their lone goal came from Emily King, which was assisted by Maia Martinez. As for the Dutchmen’s goaltenders, Amelia Murray and Bella McKee split time in net. Murray recorded 14 saves on 14 shots, as McKee totaled 19 saves and letting in the Badgers’ only goal of the evening.
Players to watch
Jaycee Gebhard (RMU)

Entering her senior season, Gebhard will be a player to focus on all season. She has already shown her potential with two points against Concordia in their exhibition game. Last season, she proved that she can be a dominant player by breaking several program records last season including the single-season assist record with 32. Not only will Gebhard be able to put the puck in the back of the net, but she will be able to set up goals for her teammates as well.

Boyle joins the Colonials after transferring from the Clarkson Golden Knights. She has already shown her importance in the lineup, as she scored one of the Colonials’ four goals against the Stingers. She played alongside four different players throughout the game, including Gebhard and Templeman. Look for Boyle to be a key factor for the Colonials this weekend as she will win puck battles and get herself to the front of the net.

Sophomore forward Grace Heiting will play a pivotal role in Union’s attack this weekend. She appeared in every one of Union’s 34 games last season. She totaled ten points last season including five goals and five assists. Coming into this season, Heiting has a year under her belt and will provide for the offense this season. Look for her to be a pain in the side of the Colonials on the forecheck and a power-play specialist.

The senior defender will look to anchor down the defensive core for the Dutchmen. Her experience will be a huge impact for this team against a strong Colonials team. Harris has played in every game for the Dutchmen during her career. She has a total of 38 points throughout her three years at Union. Harris will be a key player in this two-game series as she will provide offense from the defensive side of the puck along with playing shut-down defense.
Predictions
Last season for the Colonials was a polar opposite from the Dutchmen’s performance. The Dutchmen will look to reverse their fortunes from last season in their opening series against the Colonials at the Neville Island Sports Complex. However, the Colonials will build off of last season’s CHA regular-season crown as they will win both games. The high-powered offense will topple over the Dutchmen’s defensive approach. The Colonials will win Friday’s contest 5-0 and they will take Saturday’s game by the final of 6-3.