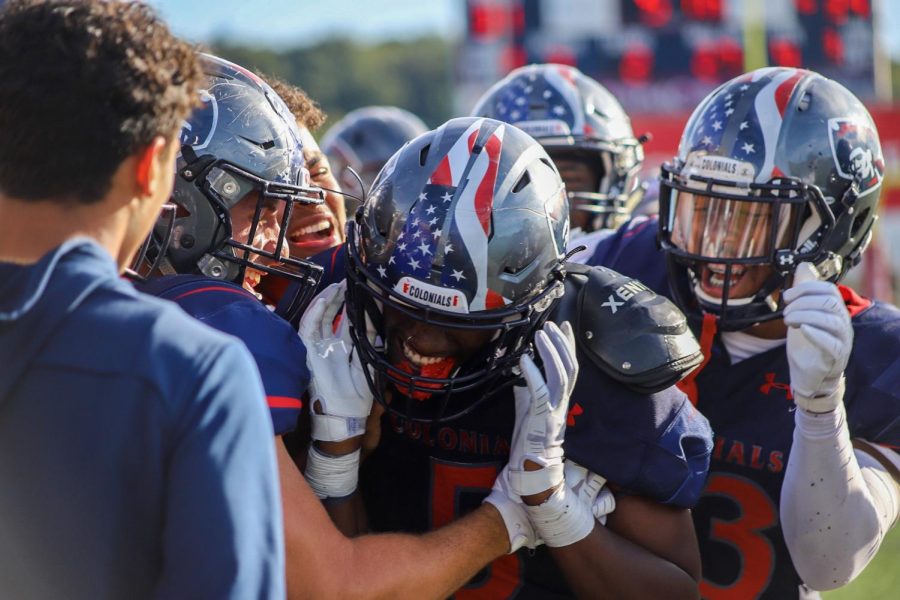 YOUNGSTOWN, OH– Following their first win of the season, the Robert Morris football team (1-3) looks to win back-to-back games for the first time since 2013 when they take on Youngstown State (3-0). The Penguins have not been kind to the Colonials in previous meetings, holding a 3-0 record against RMU. Robert Morris looks to make a statement against YSU and carry a wave of momentum as they enter NEC play. With that in mind, here is how these teams stack up.
Recapping the Colonials
Robert Morris began the season with an 0-3 start that included losses to Buffalo (2-2), Kentucky State (1-1) and Dayton (2-1). The Colonials had several opportunities to defeat both Kentucky State and Dayton but ultimately couldn’t capitalize on their chances. The Colonials capitalized on chances and created some of their own last week. Alijah Jackson capitalized on an early chance against VMI (2-2) by rushing for a 47-yard touchdown.

Terence Stephens Jr. made the most of his opportunities by finding the endzone on two occasions, proving that the Colonials have two highly capable running backs to rely on. In total, Robert Morris had 154 rushing yards. Quarterback Caleb Lewis, who started over George Martin, found success in the air through his 217 passing yards. Matthew Gonzalez only had three receptions against VMI, but he ended up with 126 receiving yards. Robert Morris had 368 total yards of offense, beating their season average of 318. Despite seeming to get into a rhythm, the offense committed another two turnovers against VMI. So far this season, they have committed a turnover each game. I believe that ball security will be a key for the Colonials against YSU.

The defense needs to focus on the ground game of the Penguins. RMU allows an average of 206.2 yards on the ground per game. Even though the Colonials held VMI below their average, the Colonials still allowed 172 rushing yards and 446 yards in total. Defense will be a key area of focus once again on Saturday. The Colonials allow an average of 369 yards per game on defense, a number that they are surely looking to improve upon when they play the Penguins. After the defensive struggles of last season, I expect the Colonials to finally start tightening up on defense. There have been signs pointing turns a shift in terms of defensive play due to Robert Morris currently having the 12th ranked pass defense in the FCS.
Scouting YSU
Youngstown State has not only found success against the Colonials in previous years but they have found success, in general, this season by starting off with a perfect 3-0 record. The last game the Penguins played in was a victory over the Colonials’ rival, Duquesne (2-1).

Youngstown State’s victory over the Dukes was a convincing one, with the Penguins winning by a final score of 34-14. The offense totaled 377 yards in the game, with both the rushing and passing totals sitting just below 200 yards each.

Quarterback Nathan Mays completed 8-11 passes and backup quarterback Joe Craycraft completed his only pass of the game, that pass resulted in a touchdown. Running back Joe Alessi led the seven different ball carriers in terms of yardage with a 75-yard performance. Receiver Miles Joiner led the team in the receiving department with 88 yards. It is clear as to why the Penguins’ offense averages an astounding 484.3 yards per game. YSU has a wide range of playmakers at their disposal. Their 309.3 rush yards per game is something that the Colonials will need to hammer down on in order to win this game.

On the defensive side of the ball, the Penguins are just as dangerous. YSU has scored 133 points this season and 40 of those points are from turnovers. Their rush defense also allows 110 yards each game, and the Penguins have allowed three rushing touchdowns all year long. Opponents average 324 yards per game when stacked up against the Penguins, that places YSU in 24th in the FCS in terms of total defense. Combine that with 24th ranked rush defense, and you realize the challenge ahead for the Colonials’ offense.
Players to Watch
Mason Gray (RMU)

Gray has made his presence known on the Colonials defense. He seems to get involved in almost every play, and he currently leads the team in tackles with 38. Gray also has five pass deflections and five broken up passes.

Alijah Jackson is coming off of back-to-back 100-yard rushing performances. He has also scored in both of those games as well which shows the success he has found recently. Jackson will be tested against a talented YSU rush defense but the redshirt sophomore will certainly be up for the challenge.

Alessi has 201 yards in the 2019 campaign thus far. He is also averaging just over six yards per carry on the season. Alessi is able to find the whole and break free against opposing defenses. Look for the Penguins to test the Colonials rush defense by feeding Alessi early and often.

The YSU quarterback, Nathan Mays, has also had a great start to his season. He has thrown four touchdown passes while averaging 145.7 yards per game. Mays also has a respectable 60.5 completion percentage. I expect him to find the open man and have a successful game against the Colonials.
Prediction
Robert Morris might be coming off of a win, but they will struggle to stop the YSU offense. The defense will allow the Colonials to hang in for a while, but they will wear down after a long drive filled with running plays. This drive will be the difference-maker in the game, as it will serve as the point where a comeback is impossible. The Colonials will put up a good fight, but YSU will take the victory.