Preview: Football travels to Sacred Heart to take on the Pioneers 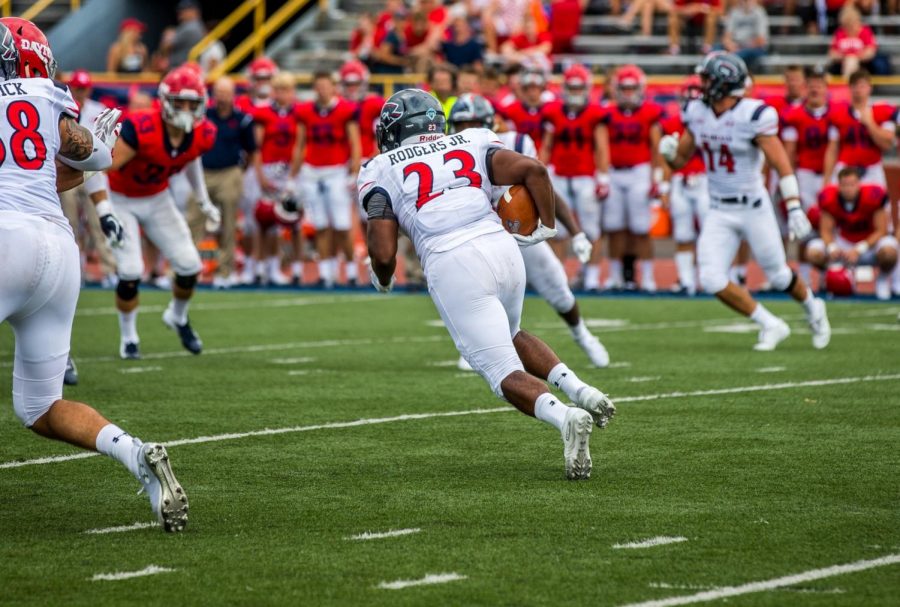 FAIRFEILD, Conn. — The Robert Morris football team (2-6, 0-4) will hit the road this week after splitting their two-game home stand. Their opponents are the Sacred Heart Pioneers (5-3, 3-0), who have won their last two games. Their most recent game was a 49-26 victory over Bryant (5-3, 2-2) which was a big win for the Pioneers. Robert Morris dropped to 0-4 in NEC play last week, after falling 20-7 to Saint Francis (3-5, 1-2) at home. This week, the Colonials are looking to upset the number one team in the NEC. It is an incredibly tough task to accomplish, but let’s take a look at how these teams stack up against each other.

Robert Morris has three games remaining this season, and two of them are conference games. The Colonials failed to win a conference game last season, and would most definitely be disappointed to not walk away with an NEC victory this year as well. This season has seen some very positive takeaways for the future, and this program has the potential to be a contender in the NEC in the very near future.

This season, the defense has struggled tremendously. They currently rank last in the NEC in all major categories. RMU is allowing well over 500 yards per game on average, and the rush defense allows an average of 265.2 yards per game. There is some upside though as we head into this final stretch of games. Last week, the Colonials gave up 20 points against SFU. This ended a streak of five consecutive games of giving up 45+ points. Also, All-NEC defensive lineman Amir Fenwick will be returning after missing last game.

RMU’s offense has been a bright spot this season, and they have kept the Colonials in several games this season. Last week, they struggled against Saint Francis as they could only manage to score seven points. Jimmy Walker went 10-22 for 151 yards and a touchdown. Matthew Gonzalez caught a record-breaking 11th touchdown pass, but would only have 26 receiving yards. Terence Stephens only gained 62 yards on the ground.

The offense will have a tough test again this week as the SHU defense currently ranks second in scoring defense and third in total defense in the NEC. However, the RMU offense has many weapons that can be utilized. They have surprised people all year, so don’t be shocked to see them compete with Sacred Heart’s great defense.

Sacred Heart is currently at the top of the NEC standings. Not only is their defense one of the best in the NEC, but their offense is just as good. They have the fourth-ranked scoring offense which is averaging 29.2 points a game. The Pioneers are second in total offense averaging 427.4 yards per game. This is a team that can really cause problems on both sides of the ball for their opponents.

Last week, the offense came out swinging as the Pioneers scored 49 points against Bryant. Sacred Heart gained 579 yards of offense. One number that jumps out, even more, is the 538 rushing yards they gained. The Colonials rushing defense has not been good this season. They have allowed over 265 yards per game on the ground. Sacred Heart averages 226.4 rushing yards a game, which is second in the conference.

The Pioneer defense managed to control the Bryant offense, which ranks second in scoring offense and third in total offense. Bryant averages 425 yards per game, Sacred Heart allowed them to gain 338 yards on offense. It will be very interesting to see how this defense handles the offensive weapons of the Colonials.

Fenwick will return after missing last week’s game against Saint Francis. He was injured against Central State and will be hungry to make an impact in his return this week. Fenwick is a team captain and has 29 tackles on the season. Expect him to make his presence known this weekend.

Stephens has been one of many bright spots on this RMU offense. He has broken the century mark on the ground in two out of the teams last three games. This game could be a good rebound for him after managing only 62 yards last week. Despite the great Sacred Heart defense, do not be surprised to see Stephens breakthrough for a few big runs on Saturday.

Meachum has rushed for over 100 yards four times this season. Last week, he ran for over 300 yards. He also racked up three touchdowns in this outing. Meachum is a dangerous player out of the backfield. He could potentially have a huge day against the Colonials on Saturday.

Duke threw only three passes last week. He completed two of them and totaled 41 yards. With the running game as strong as it was, Duke didn’t need a big game. Don’t let this fool you, Duke is a dangerous QB. He has thrown a touchdown in each game excluding last week and has 13 on the year. He will be someone the Colonials have to try and contain.

Robert Morris has struggled on the road, and I do not expect that to change this week. I actually believe the Colonials offense strikes early in the game and makes things a bit interesting. However, I think the SHU offense will eventually wear out the Colonial defense and take control of this game. Look for Meachum to have a big day yet again. Also, look for the presence of the returning Amir Fenwick on the RMU defense. Overall, I think this is a game Robert Morris can compete in early. The second half might be where things get a little ugly.