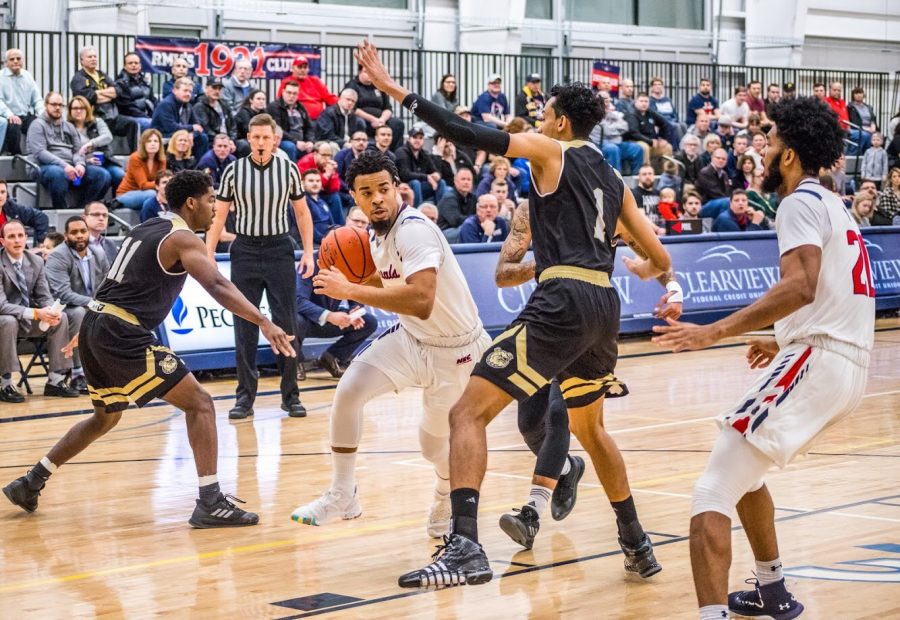 Loretto, Pa. — The Robert Morris men’s basketball team (13-13, 8-5 NEC) will look to string together some wins as they enter the final five games of their regular season starting on Saturday when they take on Saint Francis (13-11, 9-4 NEC). RMU has dropped four of their last five games, including a 76-73 loss to SFU on January 31. The Red Flash, on the other hand, have won six in a row and will look to make it seven straight when they take on the Colonials at home. RMU will be eager to snap this late-season slide and take down SFU. Let’s take a look at the teams as we head into Saturday.
Catching up with the Colonials
Despite hitting a rough patch as of late, the Colonials are still tied for second place in the NEC. With a win on Saturday, they would tie SFU for first in the conference with 9-5 records in conference play. Robert Morris will look to head into their final homestand of the season with a big win under their belt.

On Thursday, the Colonials fell to last place Mount Saint Mary’s (7-19, 4-9 NEC) by a final score of 76-62. RMU carried a seven-point lead into the half, but were outscored 45-24 in the second half. Defense was the biggest problem for the Colonials on this night, as Mount Saint Mary’s shot 51.1% in this game. Foul trouble also plagued RMU as Matty McConnell and Jon Williams each had four fouls, and Yannis Mendy fouled out.

Robert Morris will need to tighten up on defense come Saturday. Points wise, they are second in scoring defense in the NEC. They will also need to open up the court and score in transition after scoring no points on fastbreaks on Thursday. The Williams brothers will need to carry over their shooting momentum from Thursday and propel the Colonials to a win.
A look at SFU
Saint Francis can do no wrong at the moment. They have won six in a row and beat the two teams tied for second place in the conference during that run. The Red Flash have the second-best scoring offense in the conference as they average 76.8 points per game. This is a team that knows how to find the open man and get good looks at the basket.

SFU was able to shoot 52.9% against the Colonials in their matchup in January. Jamaal King buried four three en route to the win. As a team, Saint Francis made a whopping 50% of threes in this contest. The Red Flash will be eager to put on another great shooting display for their home fans come Saturday.

SFU’s last game saw them dismantle Fairleigh Dickinson by a final score of 87-62. The offense was on fire once again as they shot an even 50% from the field. Keith Braxton led the way with 21 points, 12 of which came from downtown. In the dominant win, the Red Flash bench scored 30 points. Saint Francis is hot right now, and everyone on this team can find a way to score. They will look to knock RMU down once again.
Players To Watch
Josh Williams (RMU): Williams is RMU’s leading scorer with 14.5 PPG. He has been their most reliable shooter all season, and he will look to keep that up against SFU. Look for Williams to have a big game and try to lead the Colonials to a big conference win.

Jon Williams will also be looking to make a big impact in Saturday’s game. He and his brother combined for 30 points on Thursday, and they will look to duplicate that success. The chemistry between the brothers makes for some fantastic basketball. It will be crucial for them to play well against SFU.

Keith Braxton (SFU): Braxton is one of the best players in the NEC. His 16.6 points per game put him near the top of the conference. Look for him to try and get open looks from deep and bury some big shots. He is someone that the Colonials must cover tightly.

Jamaal King (SFU): Jamaal King is second in scoring for SFU. He scores 14.8 points per game and is coming off a big game against Fairleigh Dickinson. King will look to keep up the good shooting performances this weekend.
Prediction
This one will be a good one. Expect things to remain close for the vast majority of the game. Saint Francis will make big shots, and RMU will battle their way back and prevent things from getting out of hand. In the end, I think SFU’s momentum will propel them to a win on Saturday. Expect fouling at the end to make the game look not as close as it actually was. I think these teams remain within five points of each other for the most part, but in the end, it’s SFU that pulls away.
Final Score: 78-69 Saint Francis