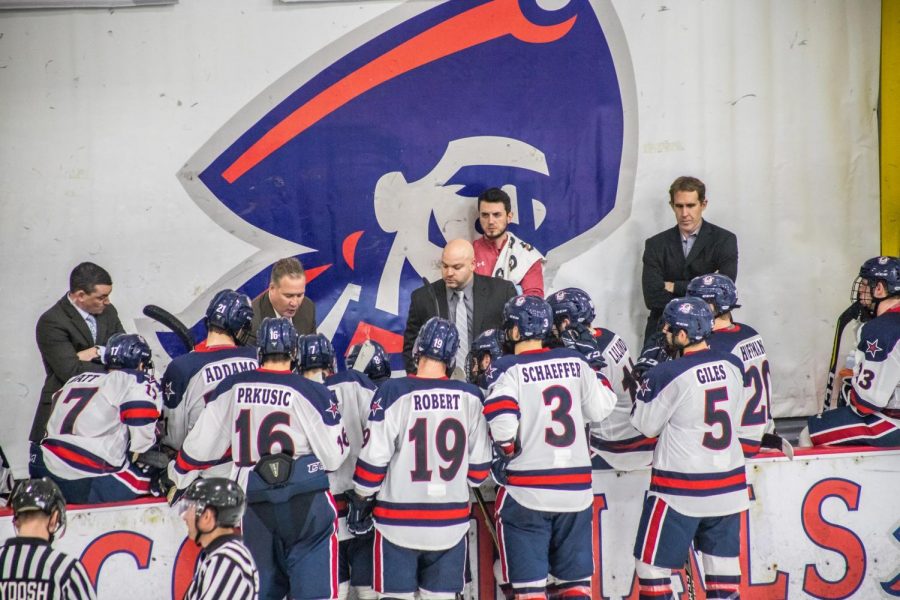 MOON TOWNSHIP– The Robert Morris men’s hockey team (0-0) will look to start their next chapter in NCAA Division I hockey off on the right foot as they take on WCHA powerhouse Michigan Tech (0-0) in a back-to-back weekend series to kick off the 2019-20 campaign at Colonials Arena on Saturday night and Sunday afternoon. Before these two sides square off for the first time in either franchise’s history, let’s take a look at who can shine for each squad and lead their team to a victory as we drop the puck on another season of college hockey!

For the sixth straight season in a row, RMU fought its way to a berth in at least the final four teams in the Atlantic Hockey Conference Tournament at the end of last year. It was a surprise to many, who had seen the Colonials struggle during the early fall and winter months, and deemed them out of making it to the tournament by the time the second half of the year started. But Derek Schooley’s team clawed and scratched their way into an eighth-place finish in the standings with a 11-15-2 record, swept through Holy Cross in the first round, staged a brilliant fightback by taking down Bentley in a three-game nail biter quarterfinal that went to OT, and firmly silenced their critics by season’s end despite falling in the AHA semifinals to eventual tournament champion American International. Despite having lost a prolific scorer in Alex Tonge and the services of Francis Marotte, who transferred to Clarkson, RMU has proven time and time again that they can shock the college hockey pundits and this year will be no different.

Few can look at the Huskies’ resumé and not be impressed with what this program has accomplished over the course of their storied history. Three NCAA national championships, 10 Frozen Four appearances, 11 conference championships (eight of which are WCHA titles), and 7 regular season championships have firmly entrenched Michigan Tech as one of the dynasties in college hockey. The Colonials will have to be mindful of the offensive and defensive prowess that a team like this can produce, despite their opening-round playoff series loss against Bowling Green, and must be vigilant on all fronts if they hope to pull off an upset.

It is no surprise that Lynch makes this list, as he has followed closely behind in years past to point leaders for RMU men’s hockey such as Brady Ferguson and the aforementioned Alex Tonge. It will be interesting to see if he can keep up with the same statistical trends as his predecessors during his senior season. The Pittsburgh native had 10 goals and 21 assists for 31 points in his junior year last season, so he is looking to improve on a stellar stat mark as he heads into his final year. For Cooper, he will undoubtedly have big shoes to fill in the wake of the departure of Marotte. He only had one start against Penn State on home ice last season, so it will be interesting to see his style of play and how it evolves or changes over the course of the season.

Few teams have possessed the shooting and passing dual-threat that the Huskies have in Donohue and Luccini. While Donohue is the man who can set up the magic, notching 21 assists to go with his lone goal last season for 22 points, it is Luccini who can truly finish opposing teams off with his uncanny scoring ability. Luccini terrified opponents last year, tallying 11 goals and 15 assists for an astounding 26 points. If the Colonials hope to avoid going down early, they will have to limit Luccini at every opportunity they can.

I feel that this will be a bit of an odd weekend to kick off the college hockey season here in Pittsburgh. I feel that RMU will come out hungry and ready to go in game 1, coming out the victors 2-1 in overtime or a shootout (as per the new Atlantic Hockey rule format), and then the next game Sunday will see the Huskies emerge winners in the same fashion, 3-2.