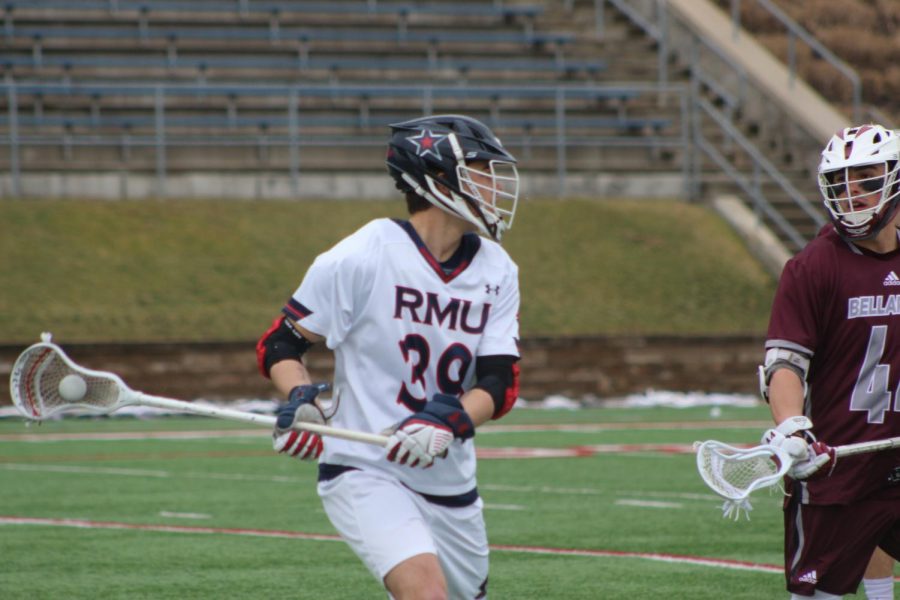 HIGH POINT, N.C. – The Robert Morris men’s lacrosse team (1-2) will be going down to High Point, N.C. to take on their third nationally ranked opponent within a span of four weeks when they play the no. 13 High Point University Panthers (4-1) on Saturday March 2 at 12 p.m.

Robert Morris is coming off their first win of the season in which they defeated the Bellarmine University Knights (0-4) 15-7 in their home opener at Joe Walton Stadium. RMU has played two nationally ranked opponents so far (Penn State & Georgetown) and if any trends predict anything, it’s that RMU has a challenge to face on Saturday.

Matt Schmidt and Ryan Smith highlighted Saturday’s performance against the Knights because Schmidt scored five goals and Smith scored three goals in the win, and both players provided two assists each.

High Point is currently coming off a close 10-9 loss against the St. John’s University Red Storm (2-1) that took place last Saturday. Before the loss, HPU won their first four games of the regular season against all non-conference opponents including upset wins over no. 2 Duke and no. 9 Virginia. The Panthers currently stand in second place in the Southern Conference, behind the Virginia Military Institute (2-0). High Point has one more non-conference game before they travel on the road to start conference play.

High Point had the edge in saves as they only had to make 11 whereas the Red Storm had 12. St. John’s was sharp on the defensive side as they had caused High Point to turnover 28 times. HPU, however, caused St. John’s to turnover 19 times.

Matt Schmidt (RMU): Schmidt is listed here as a player to watch due to his five goal performance against the Knights. His five-goal performance notched him his first hat trick of the year and notoriety as a NEC Prime Performer of the Week for week three as well. Schmidt also currently holds the top spot in four statistical categories. Schmidt leads in points with 10, goals with seven, shots with 25 and 15 shots on goal. Given how Schmidt leads multiple statistical categories and a stellar performance against Bellarmine, Schmidt is someone to keep an eye on for another stellar performance against the High Point Panthers on Saturday.

Ryan Smith (RMU): Smith is coming off a performance against Bellarmine that got him notoriety as a Northeast Conference Prime Performer of the Week for week three of the regular season after he delivered his second consecutive hat trick performance against the Knights. Smith ties for first place in points with 10 and goals with seven behind his teammate Schmidt. Given how Smith is on a similar level as Schmidt, Smith is someone to expect to be a huge contributor for the Colonials.

Asher Nolting (High Point): Nolting is the top performer on HPU’s roster. He is a sophomore attacker who carries a strong package going into the game against Robert Morris. He has started in all five of HPU’s games, scored 12 goals with 13 assists to total 25 points. Nolting also has made 38 shots with a .316 shot percentage with 20 shots on goal. In the Southern Conference, Nolting ranks in second among assists per game with 13 assists with an average of 2.6 assists per game on average. Nolting is someone to not take for granted against the Colonials.

Chris Young (High Point): Young currently stands in fifth place in the Southern Conference in goals per game with 2.6 goals per game. Young also scored two of High Point’s nine goals against St. John’s last Saturday. Young is also someone to worry about because he currently stands in first place in game-winning goals out of all the teams in the Southern Conference with two game-winning goals, granted that it takes place over the course of five games.

I predict that the game will turn into a 12-11 win for High Point. Robert Morris doesn’t have a win against a ranked opponent this season and I feel that they will fail to do so again in this one.