Preview: Men’s soccer looks to start the season off right in the RMU/Duquesne tournament 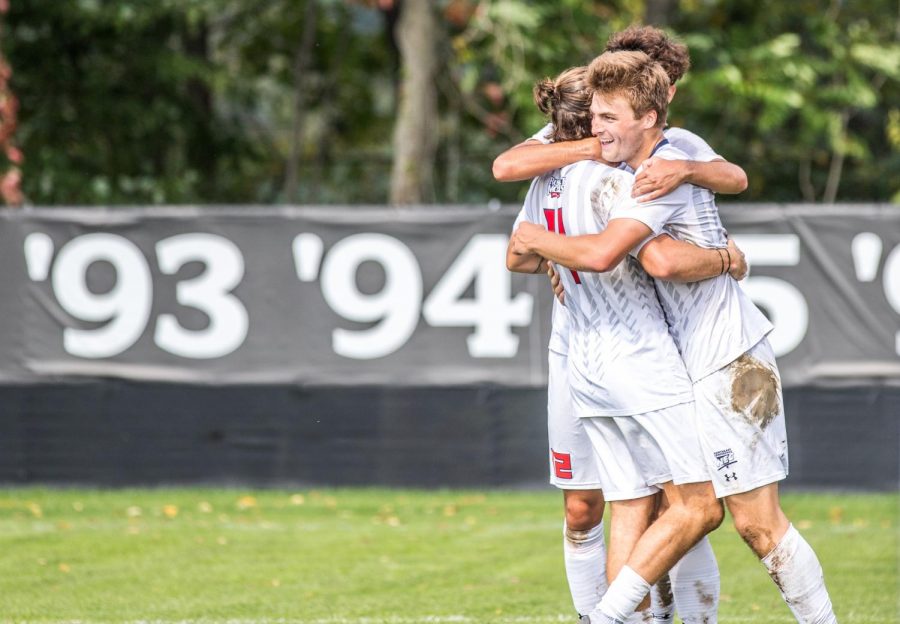 MOON TOWNSHIP– The Robert Morris men’s soccer team begins their season with the RMU/Duquesne tournament, where they will play the Oakland Golden Grizzlies out of the Horizon League on Friday at 4 p.m. They will then face off against the Bowling Green State Falcons from the MAC Conference on Sunday at 1 p.m.
Recapping RMU
RMU had a rough start to their season last year, dropping their first four games, including both in the RMU/Duquesne tournament. This year, they look to start off on the right track and put themselves in a better position than they did at the start of last season. With a new season comes major changes to the starting roster for the Colonials. Both leading scorers from last season, Zac Sherman and Owen Pearce, are gone. Robert Morris needs to turn to new faces for the majority of their offense.

On the forward side of things, the Colonials will likely look towards senior forward Christian Coridon, and a variety of sophomores and freshmen to make up for the senior losses. In the midfield, Kai Olguin looks to be the only major loss for the squad, as Noah Elamin returns for his redshirt senior season. This year will also see senior goaltender Christian Snatchko take the starting role after backing up Winter Fondi last season. The defense should be a strong point for the team, with most of the veteran core returning from last season.
Scouting Oakland
The Oakland Golden Grizzlies also begin their season with their game against RMU. They had a strong season in the Horizon League last year, going 9-7-3 overall and 5-3 in conference play. They have played two scrimmages so far this season, going 1-1 in them. They played hard in a 1-0 loss to Butler University and won 2-1 against Saginaw Valley State University.

The Grizzlies lineup features a solid, veteran backfield that features three senior defenders. They also have a diverse midfield group, but a very inexperienced forward core. Liam McQueenie will be their starting goaltender for the season, a 6’5″ senior from Ontario, who will be a tough one to crack for the RMU offense.
Scouting Bowling Green
The Bowling Green State Falcons take on Duquesne earlier in the weekend before they take on the Colonials on Sunday. They also had a strong season last year, finishing second in the MAC behind the dominant West Virginia Mountaineers squad. Their first scrimmage was against no. 2 Indiana University, where the Falcons suffered a 3-0 loss. They followed that up with a 0-0 draw against Dayton.

The Falcons may struggle scoring goals early on in the season as they look for somebody to replace dominant players like Tate Robertson. Their midfield will likely be their strongest position, with a veteran mix of juniors and seniors. They also feature Anthony Mwembia, a senior goalie from France. Their forward core, however, is full of freshmen, with the only upperclassmen being senior Chris Brennan and junior Jacob Champe.
Players to Watch
Christian Coridon (RMU)

Christian will likely be the main forward relied upon for offense for the Colonials this season. Christian has played in 35 games for RMU since his freshman season, starting in 9 of them. He along with his brother Christopher will likely be looked at as senior leaders for the men’s squad this season.

A junior midfielder, Cillo looks to build upon his strong 2018 season which saw him start 15 games for the club. He, along with fellow junior Roald Aas Ravlum and senior Corey Cunningham, make up the veteran part of the midfield for the Colonials, which should play a major role for the team this season.

Outlaw broke out last season for the Grizzlies after a solid freshman campaign which saw him put up 8 points and be named to the Horizon League All-Freshman Team. Coming into this sophomore season, Outlaw looks poised to set new career highs in goals and points, and needs to be shut down if the Colonials want a chance of winning against Oakland.

A senior midfielder from Cincinnati, Maciejewski had a solid season for the Falcons in 2018, starting 12 games and playing in all 17. Now looked at as a senior leader of the midfield, the pressure will be on Maciejewski to continue building on his game and to finish his college career on a high note. He needs to be a player that Robert Morris needs to keep an eye on if they want to beat Bowling Green.
Prediction
It’s hard to predict how a team will start any season, but I have high hopes for this year’s men’s soccer team. They have a tough first matchup against Oakland, who look to have a strong team this season. The Colonials may have to shake off a bit of rust, and that could start them off poorly against the Grizzlies.

On the flip side, the Colonials have the opportunity to jump on a tired, traveling Bowling Green team. The inexperienced forward group of the Falcons may lead to troubles for the visitors, which should allow RMU to take advantage of the Falcons weakness. I predict a loss 2-1 to Oakland, but a 1-0 victory over Bowling Green; giving the Colonials a 1-1 start to their season.