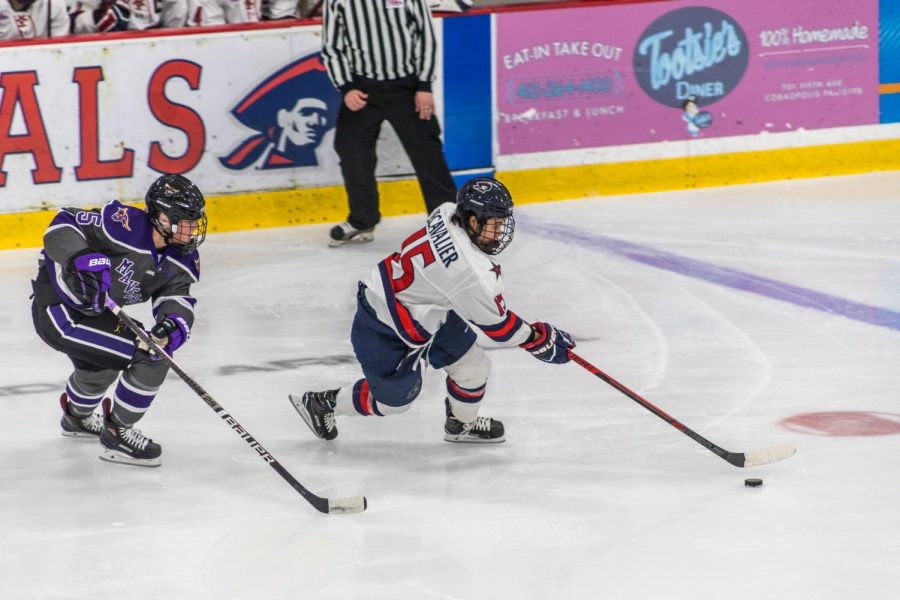 PITTSBURGH — The 2018-19 campaign has not been an easy one for the Colonials thus far, but like any team that’s worth their name, Robert Morris looks to keep fighting and prove their place this year as they look to take on No. 7 Cornell (5-1-3, 4-1-1 ECAC). Cornell poses a serious threat but with an overall record of 6-7-3 and a 4-1-1 record in the College Hockey America conference, the Colonials are more ready than you may think.

Recapping RMU
Despite struggling against a lesser opponent such as Minnesota State (5-5-2, 2-5-1 WCHA) last week, the Colonials defense has been strong all year. Top defensive play will be important against a great offensive team like Cornell. This year, the Robert Morris defense has been a force to be reckoned with. Not only do the Colonials allow only 2.1 goals per game but they are holding their opponents to shooting just under 10 percent. When you’re giving up close to twenty-one shots per game, it’s not a bad place to start.
Scouting Cornell
Cornell being the No. 7 team in the country should say enough right there. They’re top ten good. That being said, Cornell has lost or tied four of their last five games. Their conference record is what’s really keeping them up in the ranks at 4-1-1 along with the fact that they’ve lost one game in regulation so far this season.
Players to watch
Maddie Mills (Cornell): Mills has nine points in eight games for Cornell and has led the way in scoring since the season began. Cornell will come out flying and, sure enough, you’ll see Mills zooming alongside the Cornell offensive attack.

Kirstin O’Neill (Cornell): Another ivy-leaguer to keep an eye on is Kirstin O’Neill with eight points in six games. O’Neill may have missed some games but she has not missed a step since returning to the lineup with almost two points per game.

Kirsten Welch (RMU): Welch is currently third on the team as far as points go and is one of three Colonials to have ten or more points this season. Not only has Welch kept the blue line secure for Robert Morris, but she also boasts a +/- of +5.

Emily Curlett (RMU): Curlett is another Colonial defenseman looking to keep this Cornell offense at bay. Curlett is sixth in scoring for Robert Morris and a huge part of the defensive core. Curlett’s Tenacious nature and gritty work ethic is a great example of how the Colonials can overcome a tough obstacle in their way.
Prediction
Robert Morris may not be walking into these games as a favorite, but I wouldn’t be surprised to see them steal a game. It’s the perfect storm for a team like the Colonials to knock down a top ten opponent. Cornell has not been incredibly hot these past few contests, and RMU has been staying in every game they’ve played. Most might look at these games and brush them off their shoulder, but I’ve got a feeling Robert Morris can shake up college hockey this weekend with a performance not to be missed.