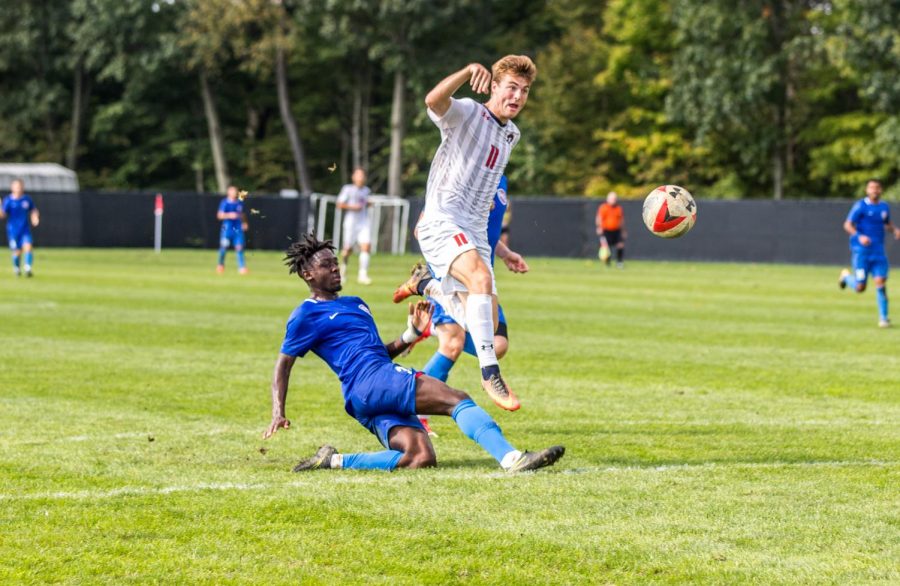 Recapping RMU
The Colonials are coming off of two key conference wins. Last week, the men’s soccer team hosted the St. Francis Brooklyn Terriers (4-8-0, 1-2-0). The Colonials and the Terriers played even soccer until the second half when RMU’s Zac Sherman put one in the back of the net. The Colonials were able to shut out the Terriers as they earned their second conference win of the season.
Scouting Fairleigh Dickinson
The Knights have struggled to play consistent soccer this season, with their last three games all having a different result. In their last game, the Knights tied St. Francis University (6-3-3, 2-0-2).

The Knights last win was on Oct. 7 when they defeated Central Connecticut State (0-10-1, 0-4-0) by a score of 2-1. Ahu Obhakan and Anthony Herbert each scored a goal in the win against CCSU. In goal, Jahmali Waite had three saves that helped aid the team to victory.
Players to watch
Zac Sherman (RMU): The senior forward seems to have found his groove as conference play gets into full swing. Sherman has had a goal in each of RMU’s last two wins and five goals on the season. His five goals are enough to make him the Colonial’s top scorer. Sherman also leads the team in shots on goal, points and game-winning goals. Look for Sherman to add another goal in Sunday’s game.

Winter Fondi (RMU): The redshirt senior goalkeeper has had a solid season thus far as the Colonials’ last line of defense. Fondi has shut out four teams this season and has racked up 49 saves in the team’s 11 games. Look for Fondi to have yet another stellar game in goal this weekend.

Ahu Obhaken (FDU): The redshirt senior out of Drogheda, Ireland is a player to look out for. Obhaken has six goals on the season and his shot could hand the Colonials their first loss since late September. Like Sherman, Obhaken leads his team in goals, points and game-winning goals. The Colonials defense will need to keep Obhaken contained if they want to win on Sunday.

Jacob Labovitz (FDU): The sophomore out of Great Falls, Virginia has only one goal on the season, but he has put up 18 shots on goal. Labovitz’s persistent shots on goal could cause problems for Winter Fondi and RMU. Although he has struggled to find the back of the net recently, he could be a deadly weapon coming off of the bench for the Knights.
Prediction
This will be a hard fought game that could go either way, and it will come down to a single goal. Ultimately, RMU will use their momentum from previous games to come out on top. Fondi will have a great game in goal that will help the Colonials get the win.