Preview: A storm is coming as Colonials look to upset #2 James Madison 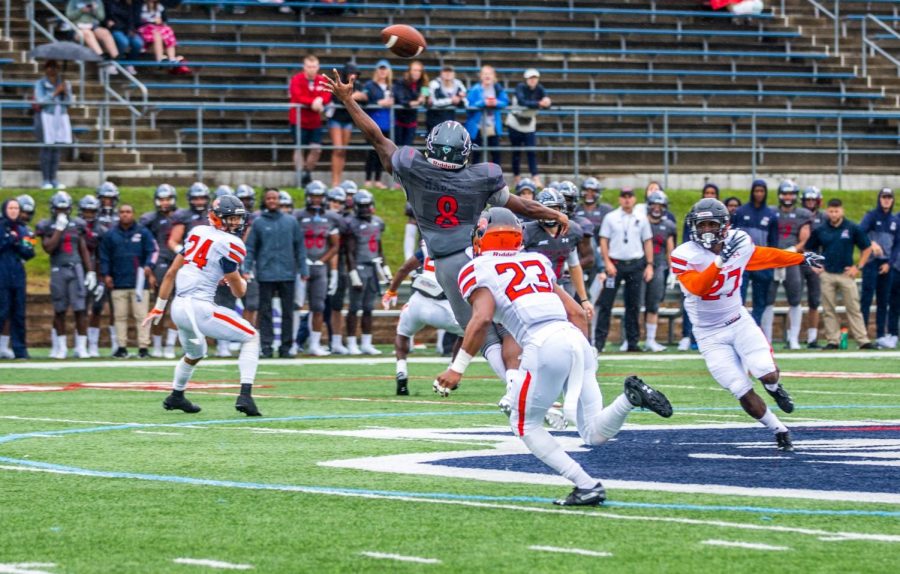 The Robert Morris (1-1) football team earned their first win of the season last week in their home opener against Virginia State (0-2). RMU found themselves down 19-7 midway through the 4th quarter, then the Colonials came to life. Jimmy Walker connected with Matthew Gonzalez for an 81-yard touchdown pass. This was the 5th longest pass play in school history.

Moments later, the Colonials recovered an onside kick. Soon after, Walker hit Warren Robinson for a touchdown. They would then convert on a two-point conversion to increase their lead to three points. Virginia State had a chance to tie things up at 22 a piece, but the kick was blocked and the Colonials won their first game under Bernard Clark Jr.

Now RMU’s attention turns to #2 James Madison (1-1). They sit behind only North Dakota State (1-0), the team that beat them in the FCS National Championship, in the rankings. This season, the Dukes are 1-1 with their only loss coming to FBS school North Carolina State.

That loss though was a close one. James Madison led after the first quarter and only trailed by four points late in the 4th quarter. NC State then had a long passing touchdown that sealed the game. The Dukes would respond by beating Norfolk State 17-0 in a very interesting game.

After three scoring drives in the first quarter, the game was then shortened by lightning. James Madison was able to gain over 100 passing yards in this short amount of time. The defense also looked stellar.

The Colonials will look to focus on their offense to keep them in this game. Quarterback Jimmy Walker is currently 40th in the nation in total pass yards with 424, and receiver Matthew Gonzalez is 22nd in total receiving yards with 197.

James Madison QB Ben DiNucci will also look to stay hot as he has a pass completion percentage of 72.73%. He also boasts a QBR of 135.93. However, the weather might hold back both passing offenses.

The game has been moved up to Thursday due to impending bad weather. Hurricane Florence is expected to wreak havoc on the east coast, and that might come into play by the time this game begins on Thursday. This also means both teams will have less time to prepare and might have to adapt to sloppy weather conditions.

Here is what to watch for on Thursday:
RMU defensive test
The Colonials defense has struggled this season to say the least. In their opener against Dayton, they gave up 465 yards to the Flyers. This included 272 rushing yards and nearly 200 passing yards. Last week against Virginia State, the Colonials allowed 444 total yards to the Trojans.

James Madison’s Quarterback Ben DiNucci will be a great test for this RMU defense. In addition to his capabilities through the air, DiNucci is a threat on the ground and currently leads the team in rushing with 146 yards while adding a rushing touchdown to that.

Robert Morris will also need to contain WR Riley Stapleton who has 100 yards receiving on the season. The Colonials defense will need to be firing on all cylinders in order to stop the Dukes’ dangerous offense.
Stars must step up
The Robert Morris offense has been quite the surprise so far this year. Despite not really clicking until the end of the game against Virginia State, this offense has proven to be effective.

Against Dayton, they had their most yardage in a game since 2013 and scored 28 points. Last week, they had over 300 yards of offense and performed extremely well under pressure in order to secure the win.

If the Colonials want to see success against the Dukes, they need Quarterback Jimmy Walker to step up. He has thrown the ball for over 400 yards while adding four touchdown passes. He does have three interceptions so far, and ball security will be key.

Receiver Matthew Gonzalez will also be a factor. He has found a way to get open all season thus far and has two TDs and nearly 200 yards receiving. Running back Terence Stephens has looked good but is yet to have a huge breakout game. He likely turned to more this game due to the impending bad weather. If the rain starts to fall, look for Stephens to get more carries instead of the Colonials turning to the air.
There’s a storm brewing
As mentioned before, Hurricane Florence is making its way towards the east coast. It is expected that weather could already be bad come kickoff. If that is the case, expect this game to be a little more interesting. There could be a limited amount of pass attempts due to rain and wind, which would lead to a lot more ground and pound offense.

RMU has struggled with stopping the run, and James Madison could expose the d-line and find great success. Robert Morris has done an average job of moving the ball on the ground this season and will hope to find more success this week. Turnovers could also be common as the elements could wreak havoc on offenses no matter how they try and move the ball.

Lastly, field goals might not be too reliable in the kind of weather that is expected. This could lead to offenses going for it on 4th down as opposed to kicking a field goal. It will be interesting to see how these teams play in the sloppy weather.